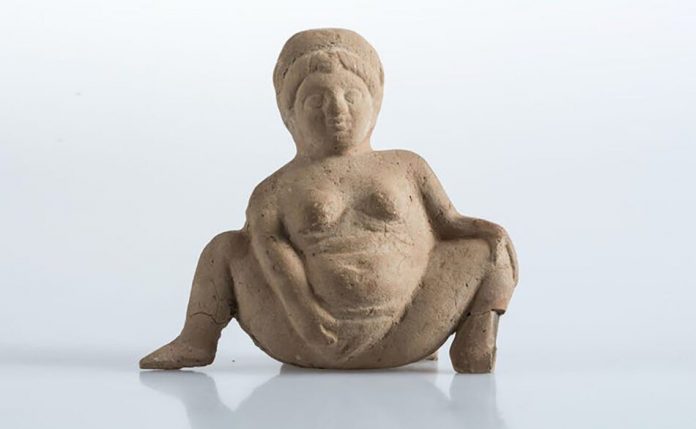 In Greek mythology Baubo, the goddess who shows her vulva in numerous statuettes, represents mockery, the woman’s sense of humor

The top image is the statuette known as a Baubo, terracotta, 1st-2nd centuries AD
MKG Sammlung

An important part of today’s comedians are women. Yet laughter has long been a male prerogative , as historian Sabine Melchior-Bonnet reminds us in her essay, Le rire des femmes, une histoire de pouvoir (PUF, 2021).

Since ancient times, laughter has been considered “contrary to the image of the humble and modest woman ,” writes Melchior-Bonnet. A woman who laughed in public was often equated with a prostitute or, more recently, a hysterical madwoman, while a man who joked, even in a very daring way, was not the object of the same disapproval.

Ancient sources confirm this discrimination through laughter, although they offer us some rare figures of female humorists. It is not about historical characters, but mythological. However, they show that for the ancient Greeks or Egyptians, laughing and making people laugh were not exclusively male privileges.

One of these first comedians is called Iame. She is mentioned in the Homeric Hymn to Demeter , a Greek poetic work composed in the 6th century BCE .

In this work we learn that the goddess Demeter is desperate because she has lost her daughter Coré, who was kidnapped by Hades, the god of the underworld. Demeter has taken on the appearance of an old woman in mourning. He wanders the Earth for several days before reaching Eleusis, not far from Athens. There she is received by Metanira, wife of the local king, but, paralyzed with grief, she refuses to eat or drink. Then a maiden called Iambé intervenes: she throws the goddess “a thousand words of joy”, says the text. The nature of these jokes is not specified, but we can guess that Iambé (whose name evokes iambic poetry, that is, satirical), makes obscene jokes. An effective obscenity, as the goddess finally breaks her silence and accepts the offered drink.

Another hymn to Demeter, composed by a certain Filikos, known from a papyrus of the third century BCE, unfortunately fragmentary, presents Iambé as an uneducated and talkative old peasant woman, whose amazing grace attracts the goddess .

THE DANCE OF THE VULVA

In another version of this myth, told by Christian authors Clement of Alexandria (c. 150-215), Arnobius (c. 240-304), and Eusebius of Caesarea (c. 265-339), the Eleusinian humorist is called Baubo . This time she combines words with action: she rolls up her tunic to show her vulva to the goddess. Surprised by this unexpected sight, Demeter finds in him a sudden comfort and immediately comes out of her lethargy.

In his story, Arnobe ( Adversus Nationes V, 26) gives us some details about Baubo’s gestures: by means of a kind of magic trick and belly dance, or rather lower abdomen, he makes her depilated vulva take the form of the face of a child. As it does? Maybe you’ve drawn a baby face on your vulva, or right on top of it, with the help of makeup. Then, like a ventriloquist, she makes sounds, creating the illusion that it is the baby in her vulva who is speaking or singing.

In any case, the effectiveness of the humorous gesture is again underlined, but also, for the three authors who are Christians, an opportunity to ridicule the polytheistic religion of the Greeks. Thus, Clement of Alexandria ironically: “Beautiful glasses and suitable for a goddess!” ( Protreptic II, 20). Christian authors reproach Greek mythology for having granted a place, admittedly a very limited one, but a place all the same, to female laughter.

If the Christian polemicists saw in her nothing more than indecency, the myth of the Eleusinian humorist reflects the idea of ​​an apotropaic and cathartic obscenity, capable of lightening a being plunged into the deepest sorrows. It is a form of positive coarseness that conveys a very serious message: Baubo reminds the goddess of the feminine power represented by the vulva, the promise of future motherhood. Therefore, the show can also be considered a gesture of solidarity between women.

Due to her success, the maiden who managed to cheer up Demeter was sometimes considered a true deity by the Greeks. A cult inscription found on the island of Naxos, dating from the fourth century BCE, mentions Baubo’s name fourth, after Demeter, her daughter Core, and Zeus. A kind of patron deity of beneficial laughter.

Much has been written about the interpretation of the Baubo myth. Historians and archaeologists have linked the uncovering of the vulva to certain practices of the Demeter cult, which may have included the handling of sexual objects, or to insults that may have been uttered ritually .

The Eleusinian humorist also attracted the attention of writers. Rabelais probably remembered her when he imagined the episode of Perrette, the woman from Papefiguière who drives away the devil by lifting her dress ( Pantagruel , Book Four, XLVII).

This story also inspired Jean de La Fontaine. In her story “Le Diable de Papefiguière”, a peasant named Perrette scares a demon by showing the “scar” that runs down her thighs .

Goethe later gave Baubo his old name back, before Nietzsche and Freud, in turn, became interested in this disturbing figure .

The psychoanalyst Georges Devereux even dedicated a book to him. According to him, the display of the vulva is a pure “phantasmatic product of the human unconscious.” This is why figures comparable to Baubo are found in other cultures, outside the Greek world .

In Egypt, the goddess Hathor, the embodiment of joy and eroticism, shows her vulva to the sun god Ra, who sometimes shows signs of weakness ( Papyrus Chester Beatty I).

In Japan, it is the goddess Ame-no-Uzume who unveils her body, provoking the hilarity of her divine audience while allowing, like Hathor, the sun’s rays to illuminate the world again .

“And when they saw her robust and full body like that of a girl, rejoicing entered the hearts of all and they began to laugh”, writes Paul Claudel in a prose poem inspired by the Japanese myth (“La délivrance d’Amaterasu ”, Connaissance de l’Est , 1920).

In 1898, German archaeologists excavating the remains of Demeter’s temple at Priene, Asia Minor (present-day Turkey), made a puzzling discovery. A series of amazing statuettes of “feminine virgins” were discovered. They are now in Berlin ( Antikensammlung ).

They have no heads as such: their faces are inscribed on their bellies and their vulvas on their chins. Was it to perform Baubo’s magic trick of making a child appear on her vulva?

Other statuettes from Egypt, where they were made between the 3rd and 3rd centuries BCE, show pregnant women squatting and touching their vulvas with their right hands. Therefore, they are also associated with the myth of Baubo. These statuettes were probably used as amulets to protect pregnant women at a time when many died in childbirth .

The Musée Rodin de Meudon has some of these amazing figures that the sculptor had acquired.

It is not impossible that Rodin was inspired or remembered these statuettes when he made his “Iris, messenger of the gods”, at the end of the 19th century.

Indeed, Rodin’s goddess draws attention to her vulva, like Baubo in ancient myth, through her pose. Iris appears frozen as she performs some sort of vulva dance. Another beneficial vulva that attracts our gaze and distracts us, at least for a few moments, from our sadness, our anguish and the misfortunes we face.

This article was originally published on The Conversation . Read the original.