First detection of oxygen atoms in the atmosphere of an exoplanet 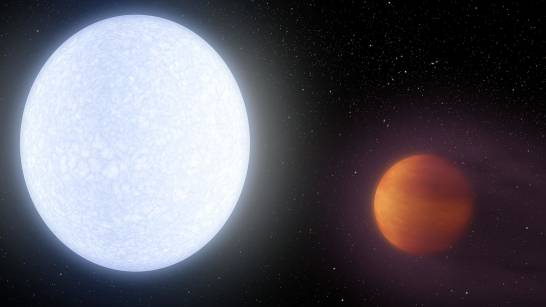 In 1995 the first extrasolar planet was discovered and today more than 4000 are known. Throughout these two decades scientific teams from around the world have tried to characterize their atmospheres and explain why these new worlds are so different from planets in the solar system.

Now, an international team with the participation of the Institute of Astrophysics of Andalusia (IAA-CSIC) publishes in Nature Astronomy the discovery of oxygen atoms in the exoplanet KELT-9b , the first detection of this compound in an exoplanetary atmosphere.

Oxygen atoms have been detected on the hottest known exoplanet: KELT-9b, where the temperature in its atmosphere is high enough to melt iron

With a daytime temperature of over 4000 degrees , KELT-9b, discovered in 2017, is the hottest exoplanet known to date. It is a gas giant similar to Jupiter , with the difference that the temperature in its atmosphere is high enough to melt iron, conditions in which life cannot thrive, although it has been detected oxygen.

These extreme temperatures are due to the fact that it rotates very close to its host star, so much so that completes an orbit in just 36 hours . Since its discovery, it has sought to understand the nature of such a hot and peculiar object, as well as the reason why it does not disintegrate being so close to its star.

To study the atmospheres of these planets, the method of transits is used, small eclipses produced when the planet passes in front of your star. During the transit, the light from the host star will pass through the planet’s atmosphere, allowing the physical characteristics and composition of that atmosphere to be studied.

Animation of the exoplanet KELT-9b around its star. / NASA / JPL-Caltech

“Our team detected traces of atomic oxygen in the spectrum of the planet. Since KELT-9b is a very hot gas giant planet, this detection is not an indication of the presence of life, but it is the first definitive detection of oxygen atoms in the atmosphere of an exoplanet ”, states Francesco Borsa, researcher at the Osservatorio Astronomico di Brera (INAF, Italy) who is directing the study.

The detection was made possible by a computer model developed by the authors, the most advanced for the study of hot exoplanet atmospheres developed to date. Not only did the model match previous observations of other compounds in KELT-9b’s atmosphere, it also predicted that the data should show the presence of oxygen atoms.

With the predictions of a computer model, previous observations of the planet obtained from Calar Alto were re-analyzed and thus the oxygen signals were found: they were there all the time, but had not been detected

Thus, the researchers re-analyzed previous observations of the planet obtained with the 3.5-meter telescope of the Calar Alto Observatory (CAHA, Almería), including its spectrograph CARMENES , and the results confirmed the prediction of the model: the oxygen signals were there all the time, but had not been detected by previous analyzes.

“The agreement between the model and the observations is a milestone in our exploration of planets outside the solar system: it shows that we can now create realistic models of exoplanets and significantly improve our ability to understand the hottest atmospheres ”, highlights Denis Shulyak , IAA researcher participating in the discovery.

“Although it is not yet possible to make similar observations of the atmospheres of smaller and colder planets, one day it will be – ahead of time. We consider this work as a dress rehearsal for future oxygen-seeking work in the atmospheres of different planets in the galaxy, including the smallest, possibly habitable worlds. ”