HOW CAN THE JAMES WEBB TELESCOPE SEE THE ORIGIN OF THE UNIVERSE? 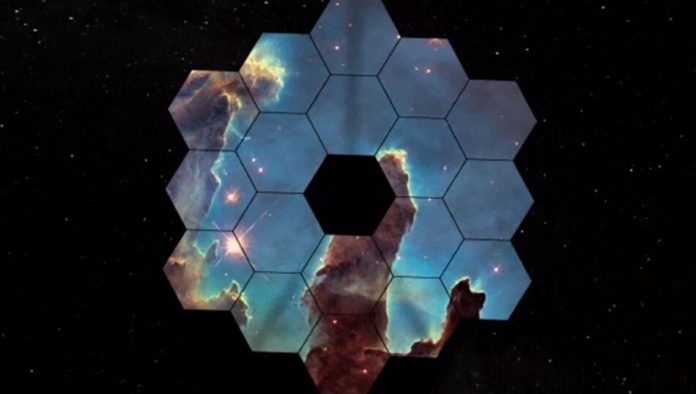 The James Webb Observatory, about to soar into the skies ( a kilometer and a half away from Earth ), will be able to capture the first “light” of the cosmos. But how is it possible? How can you observe something that happened at the beginning of time?

For starters, if James Webb is going to detect cosmic childbirth , where does he look? If you are going to see the origin of everything, the primordial light, the first flash behind the eternal darkness, where do you point?

THE BIG BANG IS DECEPTIVE

The answer involves one of the most fascinating stories in science. Accept a primordial dark soup of particles, suddenly an explosion and the universe begins to exist. With the explosion come space, time, matter and energy.

So far, we could talk about an exact point where everything began. But this is not exactly the case.

«The name Big Bang conveys the idea of ​​a firecracker that explodes at a time and place, with a center. But the universe has no center »

“The Big Bang is a really misleading name for the expanding universe that we see. We see an infinite universe expanding on itself. The name Big Bang conveys the idea of ​​a firecracker that explodes at one time and place, with a center. But the universe has no center. The Big Bang was a process that happened in time, not a point in time. We know this because we see galaxies moving away from each other, not from a central point, and we also see the heat that was left over from early times, and that heat evenly fills the universe, ”explains John Mather , lead scientist on the James Webb Space Telescope project. on the official page of NASA.

Everything that exists today, December 2021, everything from the essential particles that make up the wings of a butterfly or the pen I bite into, to the galactic dust beyond Orion, everything essentially lived in the Big Bang.

There is no center from which the universe expanded because, among other things, space did not exist, time did not even exist. Space is created because matter begins to occupy it. There is a metaphor that perhaps helps to understand how it is that the space did not exist until it was occupied. It’s like thinking about the future, which never exists. We occupy the future, as we live in the present. Thus, space and time exist as the universe expands. Very crazy, right?

Mathematics, that science that says that there are infinite dimensions, or defines the rules by which parallel universes work, shows that the universe is isotropic and homogeneous. That is, it is the same no matter where you look at it. This principle, in fact, is supported by observations.

So this is the answer to the first question: where does James Webb have to look to see the origin of the cosmos? Does not matter.

THE JOURNEY FROM THE ORIGINS

From anywhere in this exotic and convulsive universe, a photo of its origin could be obtained.

It’s easy to forget that light takes time to travel. When we see the moon, we see it as it was 1.3 seconds before. Thus, to see ten billion years in the past, you have to look ten billion light-years away.

It would be possible that somewhere in the universe someone is looking at our galaxy, the Milky Way, as it was at the beginning, just when it was born, at a time when Earth and humans did not exist.

With James Webb we will have, indeed, a photo of how things were at the beginning of time

Now let’s turn this around. By analyzing the spectrum of light that reaches us from an object, we can know how far it is from us, and therefore, to what time in the past the photo we receive belongs. With James Webb we will have, indeed, a photo of how things were at the beginning of time.

There is another proven calculation, and that is that the universe already has an age. 13.7 billion years, a million above, a million below. Accepting this, James Webb is so sensitive that he will be able to catch the light of the first objects that formed , they will be the first stars and galaxies, or whatever it was that formed in the beginning of space and time.

That flash will have spent 13.7 billion years traveling through space to reach the James Webb. It will be a very weak infrared radiation invisible to the human eye. The international team of engineers and scientists that has built the Webb has had to devise the largest, most expensive and most complex telescope in history to capture it. The universe is in permanent expansion. The space between galaxies grows larger and larger as it expands. Between Andromeda and the Milky Way that we inhabit, there is more and more space. The light that we receive from galaxies “stretches” as they travel away through space.

To understand it, the example of the sound of a siren is often given: we will perceive it higher when it is closer and more lower when it moves away. The same thing happens to the wavelengths of light emitted by objects.

Light is compressed as it approaches (turning blue) and stretches as it moves away (becoming redder). This stretch is called the cosmological redshift. And here comes the key to everything: if we observe an object that is moving away from us, the light we perceive will undergo a redshift proportional to the speed and distance the object in question is moving.

The signal that will arrive from the first light of the cosmos will be very weak, and will have traveled 13.6 billion light years to reach the James Webb

This light will allow us to know how fast it is moving and how far away it is. The signal that will come from the first light in the cosmos will be very weak, and you will know that it is coming from there because its wavelength will indicate that it comes from a place 13.6 billion light years away, the moment when the first photon possibly formed. That signal in the infrared is a wisp of heat, which can only be recognized if the telescope is, in contrast, really cold.

THE SENSIBILITY OF JAMES WEBB

JWST will stay almost as dark and as cold as outer space, to ensure that it will be able to receive signals as far away.

On the way to its destination, the telescope will slowly unfold five sheets made with Kapton , the size of a tennis court, and thinner than notebook paper. These sheets will function as a gigantic umbrella, protecting the body of the telescope from the light and heat of the sun, the moon and the Earth. In this way, the JWST will be kept almost as dark and as cold as outer space, to ensure that it can receive such distant signals.

The ‘James Webb’ is the largest telescope ever launched into space. Fruit of the collaboration of NASA, ESA, and the Canadian space agency.

Once the protective umbrella is unfolded, eighteen gold-coated beryllium mirror hexagons will open like a huge flower. The mirrors will form a reflective surface as tall and wide as a house, and will have the ability to detect that light that has been traveling for more than thirteen billion years.

THE CHEMISTRY THAT GAVE RISE TO LIFE

By looking in the infrared, we will look further back in time than Hubble has achieved, and we will see the light coming from the first galaxies to form.

James Webb will be able to pick up the faint heat signals from these objects that are so far away.

JWST was not designed to see the beginnings of the universe, which was an immense soup of particles in absolute darkness, but to see a period in the history of the universe that we have not yet seen before . Specifically, with James Webb they hope to see the first objects that formed when the universe cooled after the Big Bang. We do not know exactly when the universe generated the first stars and galaxies, or how it happened. That is what JWST will help answer. Where have we come to. The galaxy GN-z11 is so far the galaxy farthest from us detected. It is 13.4 billion light years away. It was detected by Hubble and it is estimated that it was born when only three percent of the entire universe existed, 400 million years after the Big Bang.

“The chemical elements of life were produced for the first time in that first generation of stars after the Big Bang. We are here today because of them, and we want to better understand how that happened! We have ideas, we have predictions, but we really don’t have certainties. In one way or another, the first stars must have influenced our own history, starting by shaking everything up and producing the other chemical elements in addition to hydrogen and helium. If we really want to know where our atoms come from and how little planet Earth came to be able to support life, we need to know what happened at the beginning. That’s what James Webb is going to achieve, ”adds John Mather, lead scientist on the James Webb Space Telescope project.