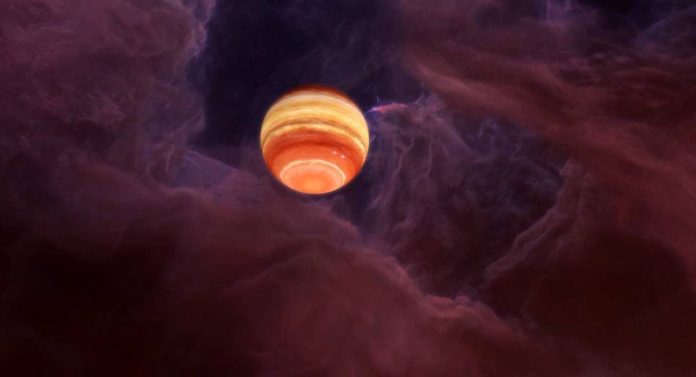 The nature and origin of the wandering planets (FFP stands for: free-floating planets ) remain unclear: are formed as stars by the gravitational collapse of small gas clouds ?, or like planets around the stars and then dynamically ripped or ejected?

Although it is known that both mechanisms can produce wandering planets, it is unknown how they contribute to their formation because a large homogeneous sample is not available.

Identifying this type of planets within a star cluster is similar to looking for a needle in a haystack, but it is what scientists from the Center for Astrobiology (CAB, CSIC-INTA) and other international centers have achieved. The results are published in the journal Nature Astronomy .

Using more than 80,000 wide-field images, the authors have identified up to 170 wandering planets from the Upper Scorpius association among the vast number of background stars and galaxies.

First, you need eyes sensitive enough to detect the ‘needles’. While stars are relatively bright and easy to detect, planetary mass members are several thousand times fainter and can only be detected with large-diameter telescopes and sensitive detectors.

To meet this challenge, the authors have combined the images available in the public astronomical archives with new large-field observations from the world’s best infrared and optical telescopes. Thus they have measured the minute movements, colors and luminosities of tens of millions of sources in a wide area of ​​the sky where the young stellar association Upper Scorpius OB is found .

The combination of proper motions (i.e. motions on the plane of the sky) and multi-wavelength photometry is, in fact, the most efficient and robust way of identifying all members of an association over very large areas. .

Each member of an association was born in the same molecular cloud complex with its own original impulse. At the end of the formation process, the members of the group move together with spatial movements similar to those of the parent cloud complex, which is an extremely efficient method of identification.

The stars in the field that are unrelated have almost random eigenmotion, whereas the galaxies in the background have no measurable eigenmotion. Therefore, any object that shows its own motion similar to that of the group is probably a member. The luminosities and colors can be used to refine the selection and reject the few remaining objects.

Using more than 80,000 wide-field images totaling up to 100 TB and spanning 20 years , the authors have identified up to 170 errant planets from the Upper Scorpius association among the vast number of stars and background galaxies.

The number of wandering planets found exceeds that expected if they form like stars from the collapse of a small molecular cloud, indicating that other mechanisms must be at play.

With current knowledge of exoplanetary systems (frequency, configuration, dynamics), we estimate that the dynamic ejection of planetary systems is an important mechanism in their formation.

Núria Miret Roig , first author of the article, affirms that the discovery of this large population of young wandering planets also has important implications in the formation and early evolution of planetary systems and, specifically, in the time scale of the processes involved.

Observations suggest that gas giants in planetary systems must form and become dynamically unstable within the observed lifespan in the 3-10 million year region to contribute to the wandering planet population.

Current studies indicate that instability among the giant planets in our solar system may have occurred in early times as well, although it was much less violent than the instability needed to eject planets as massive as those we have found.

The wandering planets that have been identified, according to Hervé Bouy , head of the European project that funded this work, are also excellent objects for follow-up studies. For example, to study planetary atmospheres in the absence of a host star to hide them, which would be interesting to compare with the atmospheres of planets orbiting stars.

In addition, studying the binary properties and circumplanetary discs around these objects will shed more light on their formation process, according to the researchers.

Assuming the fraction of wandering planets measured in Upper Scorpius is similar to other star-forming regions, there could be several billion Jupiter-like planets roaming the Milky Way without a host star. This number would be even higher for planets with similar mass to Earth, as they are known to be more common than massive planets.

New observations with the James Webb

This week the launch of the James Webb Space Telescope is scheduled, in which the CAB is also participating. David Barrado , responsible at INTA for one of its instruments (MIRI) and coordinator of the guaranteed time sub-program dedicated to this type of objects, emphasizes that the new FFPs can be perfect targets for this new observatory, “since they will allow us a detailed understanding of the phenomena that occur in their atmospheres “.

This research is part of the ERC Consolidator COSMIC-DANCE program directed by H. Bouy (Univ. De Bordeaux) and is the main result of N. Miret Roig’s doctoral thesis, and has been possible thanks to the extensive use of ESO data , NOAJ, NOAO, ING, VISIONS and ESA’s Gaia mission.