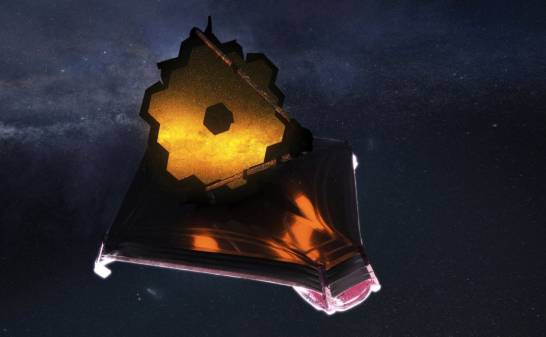 After its launch on Christmas Day 2021 and once completed its deployment , the James Webb Space Telescope continues to travel and prepare during its commission period —the 180 days after liftoff— to be ready in early summer, when it will begin observations of the first stars and galaxies in the universe , in addition to exoplanets.

But first this huge space observatory, the largest in history, has to be put into position and its components have to be carefully adjusted. During the last few days, NASA technicians have supervised the movement of the mirrors to their programmed position before being aligned.

On January 24, the Webb telescope will be placed in orbit at its destination: the Lagrange point L2, a privileged place located 1.5 million kilometers from where it will observe the first lights of the universe

“The activities to move the mirrors 12.5 mm from their launch positions have been successfully completed this Thursday,” NASA systems engineer Begoña Vila confirms to SINC. Which closely follows the evolution of the Webb from the mission operations control center in Baltimore (USA).

Now the next step is the arrival of the telescope to the place around which it will orbit, the Lagrange point L2 , initially planned for 23 January , according to NASA calculations, although officially “the final correction maneuver is planned for Monday 24 “, Vila points out.

That day, the ground teams will turn on the Webb’s thrusters to put it in orbit around the Sun, moving, in turn, around L2. On the same Monday 24, NASA will explain all the details of the operation.

The five Lagrange points are ideal zones in space where the combined gravitational pull of one massive body (such as the Earth) orbiting another (the Sun) is in balance with the centripetal force needed to move with them. This means that much smaller masses, like spacecraft, tend to stay there.

It will stabilize at a distance that would prevent going to repair it if necessary, although those responsible for the mission, who have been preparing for decades, trust that this possibility will never arise

Specifically, L2 is located 1.5 million kilometers from our planet, directly on the Earth-Sun line. The Webb will stabilize around that point at a distance that would prevent going to repair it if necessary, although those responsible for the mission, who have been preparing for decades, hope that possibility will never arise.

“In parallel with the movement of the mirrors and the imminent orbital insertion, we are controlling the cooling of the instruments , and then the operations to initialize them and the alignment of the mirrors will begin,” he advances Villa.

The observatory has a large 6.5 m primary mirror, made up of 18 hexagonal pieces of gold-plated beryllium, and a smaller secondary one. In order for them to operate properly, the mirrors and their components must be aligned with nanometer precision.

The complete process of aligning the mirrors will take about three months, and the final stage to calibrate all the instruments another two

In this task, the actuators , “some devices that are on the back of each mirror are essential: the 18 primary ones have 7 actuators each for being able to adjust them in 7 degrees of freedom , and the secondary has 6 actuators”, explains the systems engineer.

The result will be that the 18 images of the same star that will facilitate the different pieces at the beginning have to remain in a single very clear one. “It is a process called Wavefront Sensing and Control , which first identifies which star image corresponds to each mirror and then moves them to form a single star, to adjust it so that it is well focused and without aberrations”, says Vila.

“Initially the NIRCam instrument will be used for the images and the guide to maintain the stability of the observatory –he adds–, but later all the instruments will be used to check that the focus, the wavefront and all the characteristics are good for all of them”.

Vila stresses that it will be “the first time that the guidance instrument is used with the so-called attitude control system , something necessary for the mirror alignment process and that will occur a few days after obtaining the initial 18 images of the mirrors”. It is early to know on what dates NASA technicians will have these first images.

“The process of aligning the mirrors using the instruments will last about three months, and the final stage to calibrate all the instruments about two months,” advances the engineer, who refers to the web page from NASA where updated information about the Webb and its position at all times is offered .

If everything goes according to plan, the great space observatory will begin its scientific observations in early summer

Some members of the mission, such as astrophysicist James Rigby , who will participate in the NASA presentation on January 24, have also shared the schedule of operations planned for the first 180 days of the Webb in space. At the end of this commission period, their first images will be offered.

If all goes according to plan, the great space observatory, a joint project of NASA, ESA and the Canadian space agency, will begin its scientific observations in early summer [in the northern hemisphere] , helping humanity to understand the origins of the universe and our place in it.

Activities planned on the Webb during the 180 days after its launch. / James Rigby (NASA)

Share
Facebook
Twitter
Pinterest
WhatsApp
Previous articleFrom oracles to pandemic predictions: a story of our obsession with the future
Next articleWhat is the Best Deshedding Brush For Short Hair Dogs?
RELATED ARTICLES
Astronomy and Astrophysics