For the first time a spacecraft has managed to ‘touch’ the Sun : NASA’s probe Parker Solar Probe of NASA has flown through the upper atmosphere of our stars, as announced by the US space agency, “a giant step in solar science.”

Just as the landing on the Moon enabled scientists to understand how it formed, touching the matter that the Sun is made of will help scientists discover critical information about our closest star and its influence on the Sun. Solar system.

“This is a monumental moment for solar science and a truly remarkable feat,” highlights Thomas Zurbuchen , associate administrator of NASA’s Science Mission Directorate in Washington (USA). “This milestone not only provides us with more in-depth information about the evolution of the Sun and its impacts on our solar system, but everything we learn about our own star also teaches us more about stars in the rest of the universe.”

As you circulate closer to the solar surface , Parker Solar makes new discoveries, even from inside the solar wind . In 2019, this probe discovered that zigzag magnetic structures in the solar wind, called curves ( switchbacks , are abundant near the Sun. But how and where they form remains a mystery. Now, the probe has passed close enough to identify a place where they originate: the solar surface.

This first pass through the corona, as well as future overflights of this area, will provide data on phenomena that are impossible to study from afar. “By flying so close to the Sun, Parker Solar now detects conditions in the magnetically dominated layer of the solar atmosphere – the corona – as we have never been able to before,” explains Nour Raouafi , scientist of the Parker project at the Johns Hopkins Applied Physics Laboratory (USA).

“We see evidence of being in the corona in magnetic field data, solar wind data and visually in images. In fact, we can see the spacecraft flying through coronal structures that can be observed during a total solar eclipse, “he adds.

The Parker Solar space probe was launched in 2018 to explore the mysteries of the Sun by traveling closer to it than any previous spacecraft . Three years after launch and decades after first conception, it has finally arrived.

Unlike Earth, the Sun does not have a solid surface, but rather a superheated atmosphere , made of solar material bound to the Sun by gravity and magnetic forces. As increasing heat and pressure push that material away from the Sun, it reaches a point where gravity and magnetic fields are too weak to contain it.

This point, known as the Alfvén critical surface , marks the end of the solar atmosphere and the beginning of the solar wind. Solar material with the energy to cross that boundary becomes solar wind , which carries the Sun’s magnetic field with it as it travels through the solar system, to Earth and beyond. Importantly, beyond Alfvén’s critical surface, the solar wind moves so fast that waves within the wind can never travel fast enough to return to the Sun, severing their connection.

Solar material that crosses a point, known as the Alfvén critical surface, becomes a solar wind, which carries the Sun’s magnetic field with it as it travels through the solar system, to Earth and beyond

Until now, researchers weren’t sure exactly where Alfvén’s critical surface was located. According to remote images of the corona, estimates had placed it between 10 and 20 solar radii from the Sun’s surface: between 4.3 and 8.6 million miles (that is, between 6.9 and 13.8 million kilometers).

Solar Parker’s spiral path slowly brings it closer to the Sun and, during the last few approaches, the spacecraft was consistently below 20 solar radii (91% of the distance from Earth to the Sun), which That put her in a position to cross the boundary, if the estimates were correct.

On April 28, 2021, during its eighth flyby of the Sun, Parker Solar encountered the specific magnetic and particle conditions at 18.8 solar radii (about 13 million kilometers) above the solar surface, which which told scientists that it had crossed Alfvén’s critical surface for the first time and finally entered the solar atmosphere.

“We fully expected that sooner or later we would meet the crown for at least a short period of time,” comments Justin Kasper , lead author of a new article on the published landmark. in Physical Review Letters and professor at the University of Michigan (USA). “But it is very exciting that we have already reached it.”

In the eye of the storm

During the flyby, Parker Solar entered and exited the crown several times. This was to be expected, as some researchers had predicted that Alfvén’s critical surface was not in the shape of a smooth ball, but instead features peaks and valleys that wrinkle the surface. Finding out where these bulges align with solar activity coming from the surface can help scientists learn how events on the Sun affect the atmosphere and the solar wind.

When the probe dived just below 15 solar radii (about 10.4 million kilometers) from the Sun’s surface, it transited a feature in the corona called pseudostreamer . These are massive structures that rise above the surface of the Sun and can be seen from Earth during solar eclipses .

Passing through the pseudotreamer was like flying into the eye of a storm. Inside this, conditions calmed down, particles slowed down, and the number of bends decreased – a dramatic change from the busy barrage of particles that the spacecraft typically encounters in the solar wind.

Going through the pseudotreamer was like flying into the eye of a storm. Within this, the conditions calmed down, the particles slowed down and the number of curves decreased

“I’m excited to see what Parker finds as he repeatedly passes through the crown in the next few years,” says Nicola Fox , director of the Heliophysics Division of the NASA “The opportunity for new discoveries is limitless.”

The size of the corona also depends on solar activity. As the Sun’s 11-year activity cycle, the solar cycle increases, the outer edge of the corona will expand, giving Parker Solar a greater chance of being within it for periods of time. longer time periods.

“It’s a really important region to enter because we believe that all kinds of physics are potentially activated,” Kasper points out. “And now we are entering that region and hopefully we are going to start to see some of these physics and behaviors.” 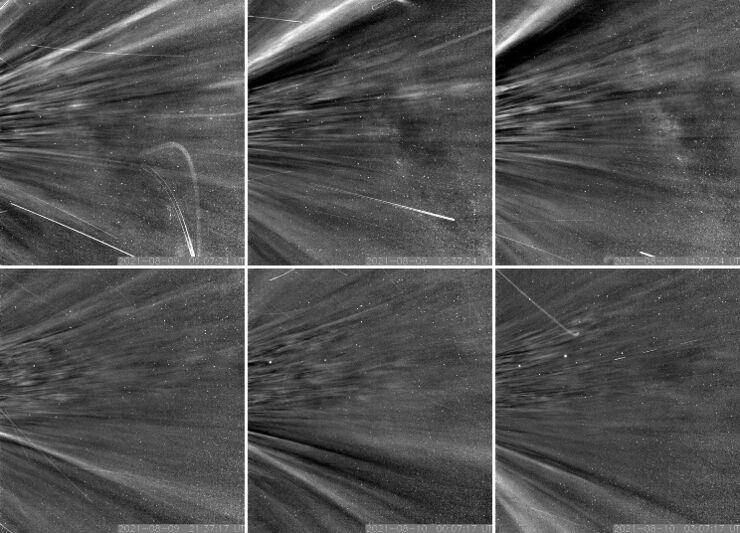 When the Parker Solar probe passed through the solar corona, it passed through structures called coronal serpentines. These structures can be seen as bright features moving up in the top images and down in the bottom row. / NASA | Johns Hopkins APL | Naval Research Laboratory

The origins of zigzag structures

In recent solar encounters, Parker Solar collected data pointing to the origin of zigzag structures in the solar wind. The data showed that one point where the curves originate is on the visible surface of the Sun: the photosphere .

In the mid-1990s, the NASA / European Space Agency Ulysses mission flew over the Sun’s poles and discovered a handful of strange kinks S-shaped lines in the solar wind’s magnetic field, deflecting charged particles in a zigzag path as they escaped from the Sun. For decades, scientists thought these occasional changes were oddities confined to our star’s polar regions.

In 2019, at 34 solar radii from the Sun, Solar Parker found that flashbacks were not rare, but common in the solar wind. This renewed interest in features raised new questions: Where did they come from? Were they forged on the surface of the Sun or molded by some process that twists magnetic fields in the solar atmosphere?

Understanding where and how components of the fast solar wind emerge, and whether they are linked to curves, could help scientists answer an ancient solar mystery: how the corona heats up to millions of degrees

The new findings finally confirm that a point of origin is close to the solar surface.

The clues came as the spacecraft orbited closer to the star on its sixth flyby, less than 25 solar radii. The data showed that the changes occur in patches and have a higher percentage of helium, which is known to come from the photosphere, than other elements. The origins of the changes were further narrowed when scientists found patches lined with magnetic funnels emerging from the photosphere between convective cell structures called supergranules .

“The structure of the regions with changes of direction coincides with a small magnetic funnel structure at the base of the crown”, comments Stuart Bale , professor at the University of California (USA). “It is what we expect from some theories, and this points to a source for the solar wind itself.” 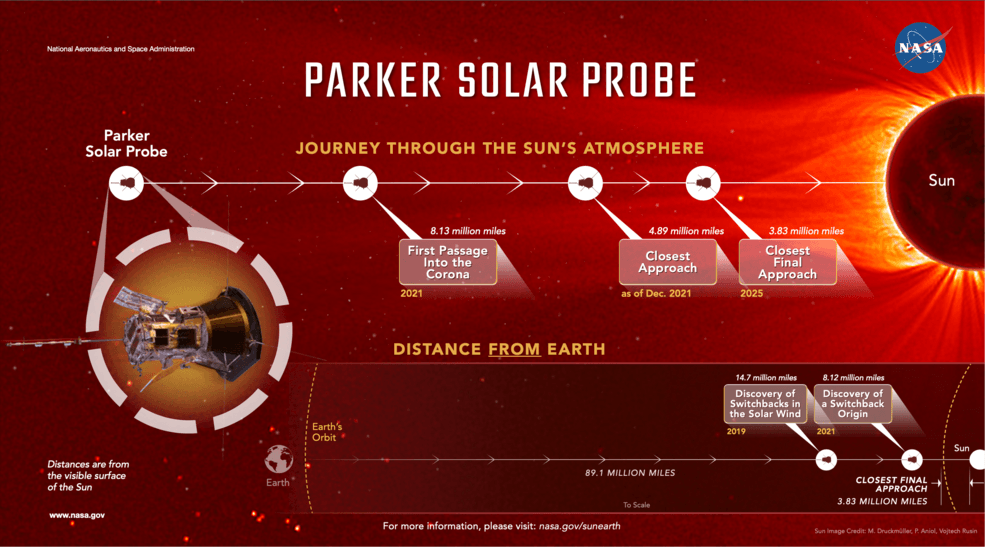 This image represents the distances from the Parker Solar probe to the Sun for some of these milestones and discoveries. / ASA’s Goddard Space Flight Center | Mary P. Hrybyk-Keith

Understanding where and how components of the fast solar wind emerge, and whether they are linked to curves, could help scientists answer an ancient solar mystery : how the corona heats up at millions of degrees, much hotter than the solar surface below.

While the new findings pinpoint where the changes are made, scientists cannot yet confirm how they form. One theory suggests that they could be created by plasma waves that sweep across the region like ocean waves.

Another argues that they are produced by an explosive process known as magnetic reconnection , which is believed to occur at the boundaries where magnetic funnels meet.

“My instinct is that as we get on the mission and get closer and closer to the Sun, we will learn more about how the magnetic funnels are connected to the curves,” explains Bale. “And hopefully it will solve the question of which process converts them.”

Now that researchers know what to look for, the closest passes of Solar Parker may reveal even more clues about U-turns and other solar phenomena.

“It’s really exciting to see our advanced technologies succeed in bringing Parker Solar closer to the Sun than ever before, and being able to bring back such amazing science,” concludes Joseph Smith , CEO from NASA’s Parker program, who concludes: “We look forward to seeing what else the mission uncovers as it moves even further into the next few years.”