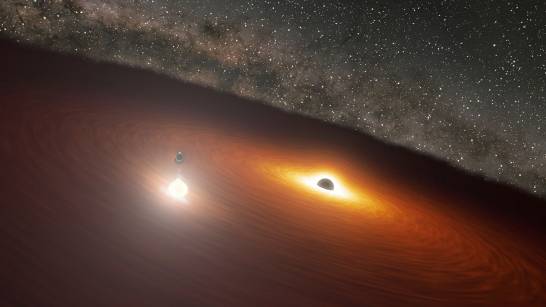 The galaxy OJ 287 , located about 3.5 billion light years from Earth, is not an ordinary object. It belongs to the group of blazars , the most powerful sources of continuous radiation in the universe. These objects show a central supermassive black hole surrounded by a disk of gas that feeds it, but they are among the 10% of galaxies that we call active, and among the even smaller percentage that have a jet of matter emerging from both poles at very high speed and that we see almost straight on.

The highest resolution image of the central regions of the galaxy OJ 287 suggests that we are facing a unique dance duo of black holes, with the secondary orbiting the primary

Furthermore, OJ 287 is the only supermassive black hole binary system candidate that we know of in our cosmic neighborhood.

Now, an international scientific team headed by the Institute of Astrophysics of Andalusia (IAA-CSIC) has obtained the image with higher resolution of the central regions of OJ 287 which indicates that, in effect, we are looking at a unique black hole dance duo.

Analysis of the data revealed that this spectacular source exhibits a highly curved plasma jet that has several knots, or brighter regions, the nature of which is unknown.

Comparison of space and ground observations revealed a progressive curvature of the jet with increasing angular resolution, in agreement with theoretical predictions that OJ 287 hosts not one, but two supermassive black holes [ 19459003], with the secondary orbiting the primary and piercing its accretion disk twice every twelve years.

“These results represent a step forward in our knowledge of the morphology of the jets in the vicinity of the central engine. They also confirm the role of magnetic fields in its launch and once again record indirect evidence of the existence of a binary system of black holes in the heart of OJ 287”, says Thalia Traianou , a researcher at the IAA participating in the work.

Observations of telescopes on the ground and in space

The discovery has been possible thanks to the technique known as very long base interferometry (VLBI by its acronym in English), which allows multiple geographically separated radio telescopes to work in unison, functioning as a telescope with a diameter equivalent to the maximum distance that separates them.

In this case, the scientific team observed OJ 287 with ground antennas and in space. The participation of the antenna in orbit of ten meters Spektr-R (RadioAstron mission, of the Moscow Astro Space Center and supported by the Russian Space Agency), allowed to create a radio telescope with a diameter fifteen times greater than the from the earth.

The resulting image is equivalent to distinguishing, from the ground, a twenty-cent coin on the surface of the Moon. “We have never looked at the inner workings of the jet in OJ287 in such fine detail,” Traianou notes. 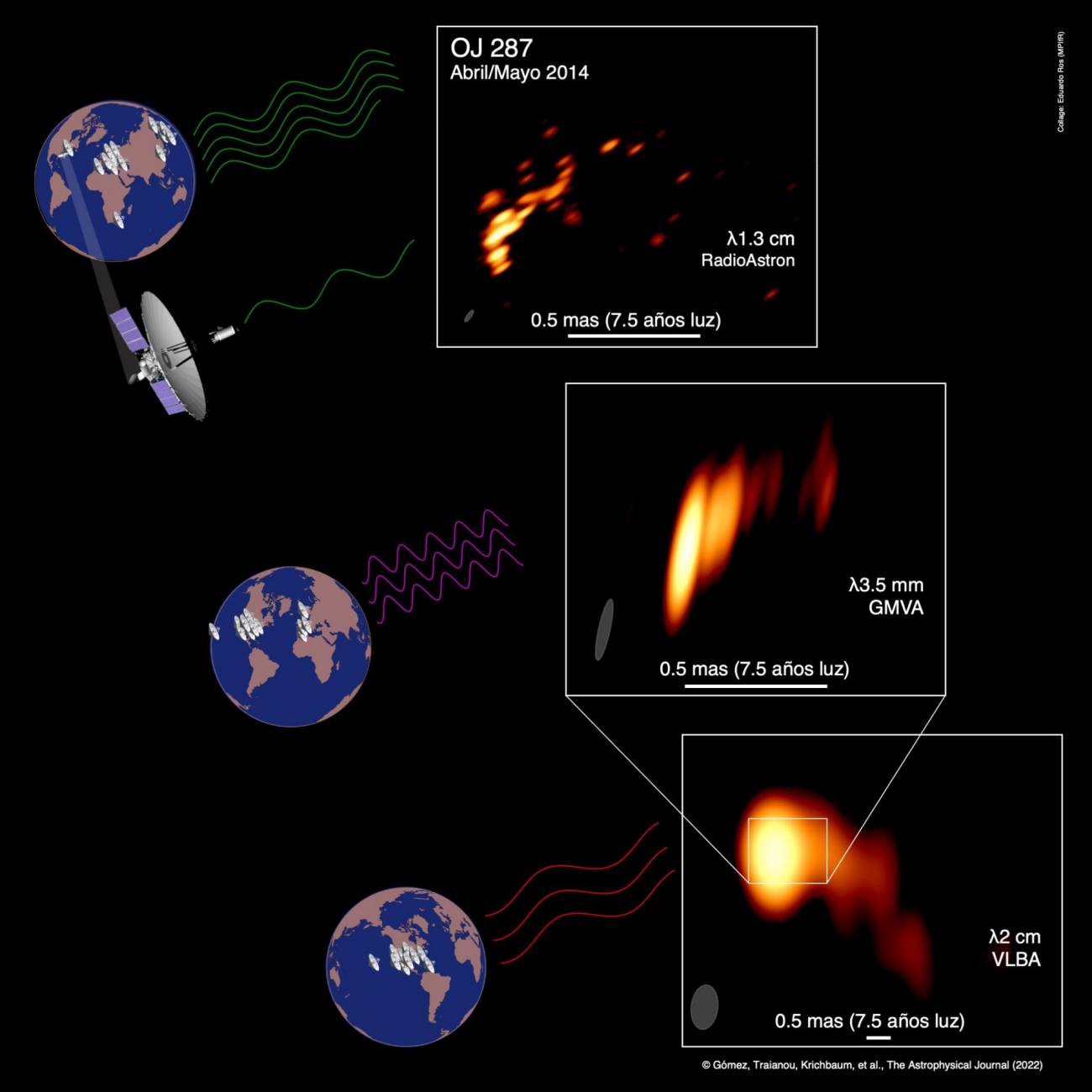 Observation sets and images of the curved jet in the active galaxy OJ 287. From top to bottom, a global array of radio telescopes including the Spektr-R space observatory, which has enabled a record observation of 0.012 milliarcseconds ; the millimeter-wavelength observations of the Global mm-VLBI Array; and the Very Long Baseline Array of the American NRAO. / Gomez et al./The Astrophysical Journal

Today, one of the main unknowns related to the formation of supermassive black holes is known as the final parsec problem .

The theory suggests that all binary black hole systems will forever maintain a distance of about one parsec (equivalent to 3.26 light years), due to the difficulty in dissipating momentum angular when the two holes are isolated from other gravitational interactions, and the separation between them is not small enough for them to emit gravitational waves.

The detection and study of the gravitational waves emitted by these systems can confirm or rule out this theory, an advance that astrophysicists hope to answer with future observations and studies.