The gigantic magnetic flare of a neutron star recorded 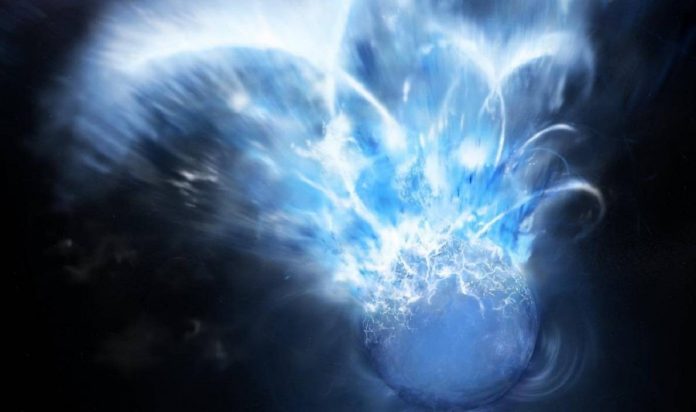 Among the neutron stars, objects that can contain half a million times the mass of the Earth in a diameter of about twenty kilometers, stands out a small group with the most intense magnetic field known: magnetars .

These rare objects – barely thirty have been detected – suffer violent eruptions of which little is known, due to their unexpected nature and their short duration, of barely tenths of a second.

A scientific group headed by the  Institute of Astrophysics of Andalusia ( IAA-CSIC ) publishes today in the journal Nature the study of an eruption in detail, since they have managed to measure different oscillations (or pulses) in its brightness that occur during the instants higher energy. These oscillations are a crucial component in understanding giant magnetar flares.

“Even in an inactive state, magnetars can be one hundred thousand times more luminous than our Sun,” says Alberto J. Castro-Tirado , IAA researcher who is leading the work. “In the case of the flash we have studied, GRB200415 , which occurred on April 15, 2020 and lasted only around one tenth of a second, the energy released is equivalent to the energy radiated by our Sun in one hundred thousand years ”, emphasizes the researcher.

The observations revealed multiple pulses, with a first one appearing only about tens of microseconds, much faster than other extreme transients, the authors note.

In the case of the flash we have studied, GRB200415, which occurred on April 15, 2020 and lasted only around one tenth of a second, the energy that was released is equivalent to the energy that our Sun radiates in one hundred thousand yearsAlberto J. Castro-Tirado (IAA-CSIC)

It is believed that eruptions in magnetars may be due to instabilities in their magnetosphere or to a kind of earthquakes produced in their crust, a rigid and elastic layer about a kilometer thick.

“Regardless of the trigger, in the magnetosphere of the star a type of waves will be created, Alfvén waves, which are well known in the Sun and which, while bouncing back and forth between the points at the base of its lines of magnetic field, they interact with each other, dissipating energy ”, explains Castro-Tirado.

ASIM instrument with which the event was detected. / NASA

The oscillations detected in the eruption are consistent with the emission produced by the interaction between Alfvén waves , whose energy is rapidly absorbed by the crust. Thus, in a few milliseconds, the  magnetic reconnection process ends and, therefore, also the pulses detected in GRB200415, which disappeared only 3.5 milliseconds after the main burst.

The analysis of the phenomenon has made it possible to estimate that the volume of the flare was similar or even greater than that of the neutron star itself.

One year studying the signal

The eruption was detected by the ASIM instrument , on board the International Space Station , which was the only one of a total of seven capable of recording the main phase of the eruption in its full energy range without suffering saturation.

ASIM is a mission of the European Space Agency, with strong Spanish participation, led by the University of Valencia and the National Institute of Aerospace Technology ( INTA ).

The scientific team was able to solve the temporal structure of the event, a truly complex task that involved more than a year of analysis for a second of data.

The scientific team was able to solve the temporal structure of the event, a truly complex task that involved more than a year of analysis for a second of data.

“The detection of quasiperiodic oscillations in GRB200415 has been a challenge from the point of view of signal analysis. The difficulty lies in the brevity of the signal, whose amplitude decays rapidly and is embedded in the background noise. correlated noise, it is difficult to distinguish the signal from the noise “, indicates Javier Pascual , IAA-CSIC researcher who has participated in the work.

“We therefore owe this achievement to the sophisticated data analysis techniques that have been applied independently by the various team members, but it is also undoubtedly a technological achievement due to the excellent quality of the data provided by the ASIM instrument on board the International Space Station “, adds Pascual.

The most distant magnetar ever observed

These flares had been detected in two of the thirty known magnetars in our galaxy, the Milky Way, but also in two others located in other galaxies. GRB2001415 would be the most distant magnetar eruption captured to date, found in the Sculptor group of galaxies some thirteen million light years away.

“This eruption has provided a crucial component in understanding how magnetic stresses are produced in and around a neutron star. Continuous monitoring of magnetars in nearby galaxies will help to understand this phenomenon, and will also pave the way to learn more about fast radio bursts, today one of the most enigmatic phenomena in astronomy ”, concludes the researcher.

In addition to researchers from the IAA and the University of Valencia, scientists from the universities of Cádiz and Malaga have participated in this work, also using data from the BOOTES robotic telescope network and the Gran Telescopio Canarias.

Share
Facebook
Twitter
Pinterest
WhatsApp
Previous articleWHY OMICRON IS LESS DANGEROUS BUT MORE CONTAGIOUS
Next articleFree games on the Epic Games Store: These will be the next to arrive
RELATED ARTICLES
Astronomy and Astrophysics