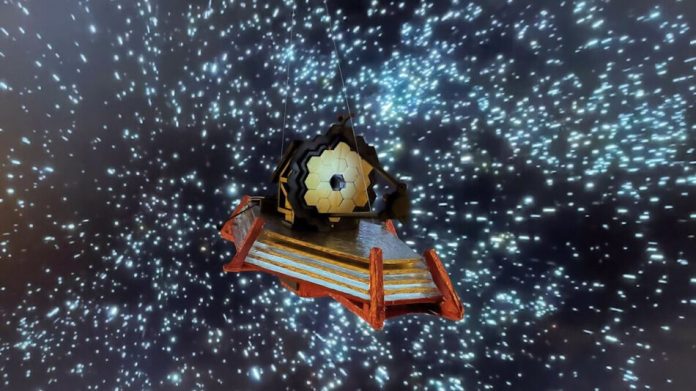 One of 18 golden mirrors at NASA’s space observatory, the James Webb Space Telescope, was hit by a small space rock larger than anything they tested it with on the ground. The telescope is fine after the impact, but the news has updated the risks of the mission.

Everything continues in perfect condition, NASA assures in a statement, and July 12 remains the long-awaited date on which the first full-color images of a telescope that promises to change our view of the universe, the James Webb, will be shared.

THE POSSIBILITIES OF IMPACT WITH MICROMETEORITES

Prior to its launch on Saturday, January 8, NASA made a broadcast showing how likely it was that James Webb would be hit by small particles of space debris, such as micrometeoroids, small meteor fragments, and other objects, which would normally They weigh less than a teaspoon of salt.

Any spacecraft suffers many impacts in the course of long and productive scientific missions in space.

Between May 23 and 25, NASA’s James Webb Space Telescope suffered an impact on one of its primary mirror segments. After initial evaluations, the team found that the telescope still performs at a level that exceeds all mission requirements despite a marginally detectable effect on the data.

Comprehensive analyzes and measurements are underway. Impacts will continue to occur for the entirety of Webb’s life in space.

Webb’s mirror was  designed to withstand being  bombarded from the environment by micrometeorites in its orbit around Sun-Earth L2 from dust-sized particles flying at extreme speeds.

“We always knew that Webb would have to weather the space environment, which includes strong ultraviolet light and charged particles from the Sun, cosmic rays from exotic sources in the galaxy, and occasional micrometeoroid impacts within our solar system,” explains Paul Geithner. , deputy technical director for projects at NASA’s Goddard Space Flight Center in Greenbelt, Maryland. “We designed and built Webb with performance headroom (optical, thermal, electrical, mechanical) to ensure he can perform his ambitious science mission even after many years in space.”

WHERE DID THE MICROMETEORITE THAT HIT WEBB COME FROM?

This most recent impact was not the result of a meteor shower and is currently considered an unavoidable chance event. As a result of the impact, a specialized team of engineers was formed to look for ways to mitigate the effects of more micrometeorite impacts of this scale.

Lee Feinberg, element manager for the Webb Optical Telescope at NASA Goddard explains: “Since launch, we have had four smaller measurable micrometeorite impacts that were consistent with expectations, and this most recent one is larger than our predictions assumed. degradation. We will use this flight data to update our performance analysis over time and also develop operational approaches to ensure that we maximize Webb’s imaging performance to the best of our ability for many years to come.”