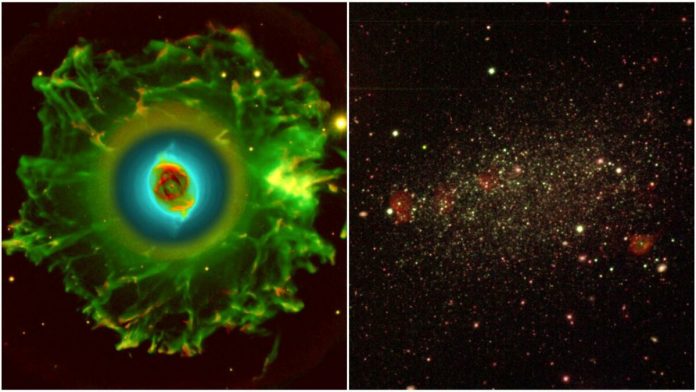 Published the scientific article that reveals the enigma of the brightest planetary nebulae. It is the result of the work of Rebeca Galera, the IAC astronomer who died before being able to conclude it. Rebeca called the planetary nebulae “my green fireflies.”

The image above shows on the left. the “Cat’s Eye” Nebula in our galaxy. At the distance of the Andromeda galaxy (right), a thousand times farther, the nebulae are seen as “green dots.” Credit: Romano Corradi

Rebeca Galera worked as an astronomer at the Isaac Newton Group of Telescopes (ING) in La Palma, while finishing her doctoral thesis on planetary nebulae in M31 and M33. He was studying how stars die, the final phases of their life. The stars die in a spectacular way, with a great explosion, forming great nebulae; his last moment of glory. The star takes with it all the chemical elements it has created and that can end up creating other stars, other planets, other living beings. Rebeca called those beautiful explosions “my green fireflies.”

Rebeca Galera was about to conclude the article that is now published, on the nature of the brightest planetary nebulae, an enigma that has been solved thanks to the data she obtained. 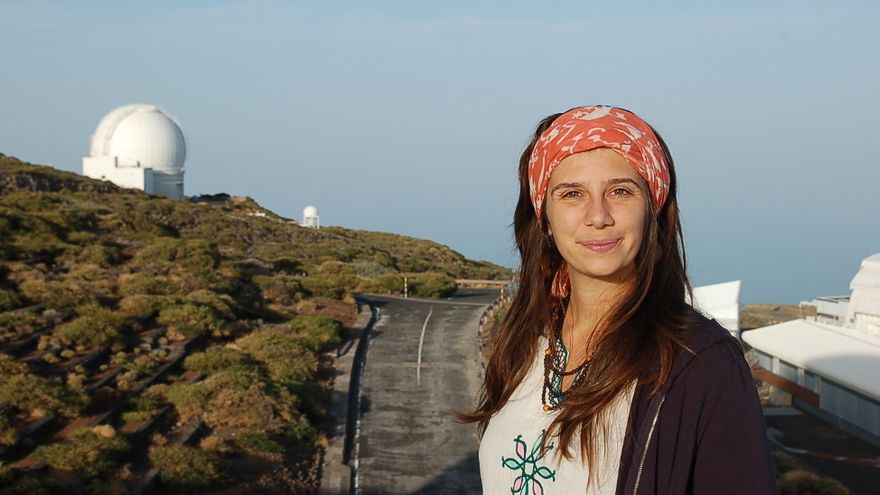 The study led by researchers from the Canary Islands Institute of Astrophysics (IAC) resolves an old debate about which are the progenitor stars of the brightest planetary nebulae.
The main author of the article, which has just been published in the journal Astronomy and Astrophysics , is Rebeca Galera Rosillo.

The importance of nebulae to measure the size of the universe

The first and most important thing to understand what the Universe is like is to know how big it is, measure the distances to the galaxies. Just as in the Renaissance people began to decipher how big the world was, where the seas and continents were, today the Universe is mapped using distance scales that have been determined little by little, star by star, galaxy by galaxy.

Only a century ago it was not even known that galaxies were star systems, billions of them, and it has been advances in technology, ever larger telescopes and ever more sensitive instruments, which have been allowing us to study galaxies and begin to isolate their individual stars. Even today normal stars, such as the Sun, outside our galaxy cannot be studied, but they can when, as they evolve, they become planetary nebulae.

A planetary nebula is the gaseous envelope expelled by a star after becoming a red giant, that is, when it is in a critical phase in which the star is no longer able to support the weight of its own mass: it has run out the best and most abundant “fuel” it had, hydrogen, and starts using its helium reserve.

It is then that the inner core is exposed and, due to its extremely high temperature (in a few thousand years, it goes from about 3,000 °C to 100,000 °C or more), it emits almost all its light in the ultraviolet, violently heating the ejected gas layers until they are ionized.

“The fascinating thing about the case is that these envelopes, which we call planetary nebulae, convert the immense amount of ultraviolet energy generated by the star into visible light and, mainly, into an emission line that falls just where the human eye is more sensitive, in the yellow-green area of ​​the spectrum”, explains Antonio Mampaso, researcher at the IAC and co-author of the article. “It is the emission line of the twice ionized oxygen atom, [OIII] 5007 Angstrom”, he clarifies.

According to Romano Corradi, director of the Gran Telescopio de Canarias (GTC or Grantecan) and co-author of the article, “planetary nebulae are key to understanding the continuous chemical enrichment of the Universe, the inexorable tick-tock that marks an arrow of chemical advance towards the future”.

And he adds: «But it has also been shown that they can be used as beacons to know the distances to galaxies, due to the fact that in any type of galaxy (spiral, elliptical, young, old…) all the planetary nebulae more brilliant ones reach the same intrinsic brightness at the [OIII] 5007 Angstrom emission line, and do not go beyond there”.

This constancy is such a robust property that it is used to measure distances to galaxies up to about 70 million light years and beyond. But researchers don’t know why the brightest planetary nebulae cluster precisely around a certain “magic” value of luminosity, considering the various physical processes involved.

Standard theoretical models predict that the maximum luminosity of a planetary nebula should be different depending on the type of galaxy and, furthermore, that such bright nebulae should not exist in highly evolved systems, because their progenitors are expected to be relatively distant stars. massive, about twice the mass of the Sun or more, which should have already disappeared in such ancient systems. The observation contradicts both.

A team of eight astronomers led by the IAC and including Jorge García Rojas and David Jones, postdoctoral researchers at the IAC, have addressed this enigma by determining with the greatest possible precision the physical and chemical parameters of the brightest planetary nebulae and of its parent stars in the disk of the nearest spiral galaxy, Andromeda, M31.

For this, very deep spectra of a sample of planetary nebulae from M31 have been obtained with the Grantecan, located at the Roque de los Muchachos Observatory (Garafía, La Palma). The result is that the brightest planetaries are normal nebulae, with a slightly higher density than average and with parent stars with masses close to 1.5 times that of the Sun.

“Recent theoretical work, using the most up-to-date evolutionary models, suggested that stars with these masses could generate, for at least a thousand years, such luminous planets,” Mampaso highlights. “The results obtained indicate, therefore, that to understand the brightest nebulae, massive stars are not needed, even though there are plenty of them in a galaxy like M31”, he says.

This work was led by Rebeca Galera Rosillo, an IAC doctoral student who passed away in 2020 when she was completing the recent research. A native of Puebla de Don Fadrique, in Granada, Rebeca was the only female astronomer in the history of her municipality. After completing his studies at the University of Granada, where he stood out as a student, he joined the IAC in 2014 through a predoctoral contract for research staff in training under the supervision of Antonio Mampaso and Romano Corradi. During her last years, she worked as an astronomer at the Isaac Newton Group of Telescopes (ING) in La Palma, while finishing her doctoral thesis.

“Rebeca used to say that planetary nebulae are cosmic fireflies: they don’t live long, they shine a lot and they’re beautiful,” recall its co-directors, Corradi and Mampaso. “In her work as an astrophysicist, she reached the frontier of knowledge, as far as it can be today,” they point out. But in addition to his passion for Astronomy, he also left us his joy and a vision of the world where music and art, solidarity with the most disadvantaged and science can come together to make a better and fairer world.