How to crop a video on iphone 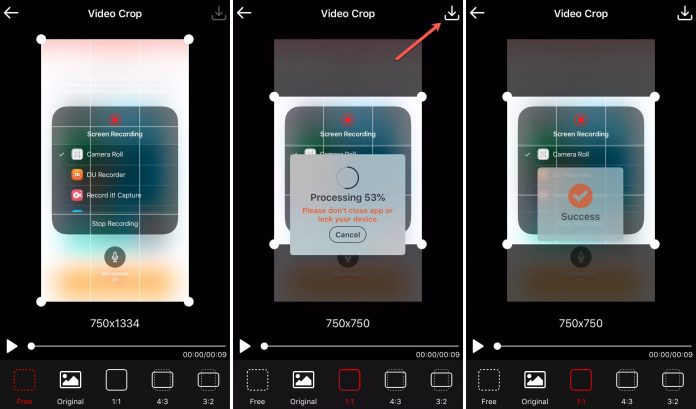 We’ve all used our iPhone to record videos, whether at a wedding, the park, or at home. It is something that is part of our daily lives: taking out the phone every time something ‘worthy of social networks’ happens. However entertaining or interesting the content of your iPhone videos may be, the size and framing might not always be to your liking. To help you in this, we will tell you how to trim a video on an iPhone.

If you’re not using iOS 13 or later, a proper alternative to Photos is iMovie. Usually, you will find the app pre-downloaded on your iPhone. If not, you can download it through the App Store.

Once downloaded, this is how you can trim the videos:

Step 2 – Select Movie and then the video you want to trim. Then tap on Create Movie at the bottom of the screen.

Step 3 – Select the video as it appears on the timeline in the bottom half of the screen. Then select the little Zoom icon (which looks like a magnifying glass) in the top right corner of the screen.

Step 4 – Slide the video in or out to zoom in and out (this effectively crops it). tap Done in the top left corner of the screen once you’re done.

Step 5 : Tap on the Action (Share) icon at the bottom of the screen (it looks like a square with an arrow pointing vertically out). Finally, select Save Video, which saves the newly trimmed video to your Camera Roll.

Also, it’s worth noting that compared to Photos, iMovie has the advantage of preserving the original aspect ratio of your video.

How to Crop a Video on iPhone Using Video Crop

If for some reason, you don’t like Apple apps, you can trim videos on iPhone using third-party apps. The most downloaded and known is Video Crop – Trim & Cut Videos. Just like any other downloadable iPhone app, it is available on the App Store.

Once downloaded through the App Store, you can use it to trim videos using the following steps:

Step 1 – Open Video Crop and tap OK when asked if you want the app to access your photos. After skipping the Pro version ad, select the video you want to trim.

Step 2 – Tap Crop at the bottom left corner of the screen. Then start dragging one of the corners of the video, moving the edge inwards until you’ve cropped the desired part of the video. Repeat with any other corners until you have finished editing.

Step 3 – Tap Done at the top right corner of the screen. If you don’t like the crop, you can undo it by tapping the Undo symbol in the top menu bar and then tapping OK .

In addition to manual cropping, Video Crop is useful if you want to crop your iPhone videos to specific aspect ratios, like the ratio used on Instagram. The app also allows you to perform a number of editing functions, while some talented people have even used it to edit short film quality films.

Cropping is not the same as cropping… or rotating

Just to clarify, trimming is not the same as trimming. When you trim a video on iPhone, you shorten its length by cutting off entire frames (usually the beginning or end). In contrast, cropping involves selecting an area within the video frame and removing everything outside of it. And in case you’re not sure, cropping is also not the same as rotating: the latter involves turning the video to different angles.

How to trim a video on an iPhone

Unfortunately, you can’t use the Camera app on iPhone to ‘pre-crop’ videos while you’re shooting them. However, once they’ve been filmed, you can crop them using the Photos app, as long as you’re running iOS 13 or later. This is what you should do:

Step 1 – Open Photos and select the video you want to trim.

Step 2 – After opening the desired video, tap on Edit at the top right corner of the screen.

Step 3 – Tap the Crop-Rotate icon at the bottom of the Edit screen . Once you’re in Crop mode , press and hold one of the corners of the video. Then drag the border inwards to the desired point. Repeat the process with any other corners until you have finished trimming.