HOW TO USE A LAPTOP AS A MONITOR FOR XBOX ONE 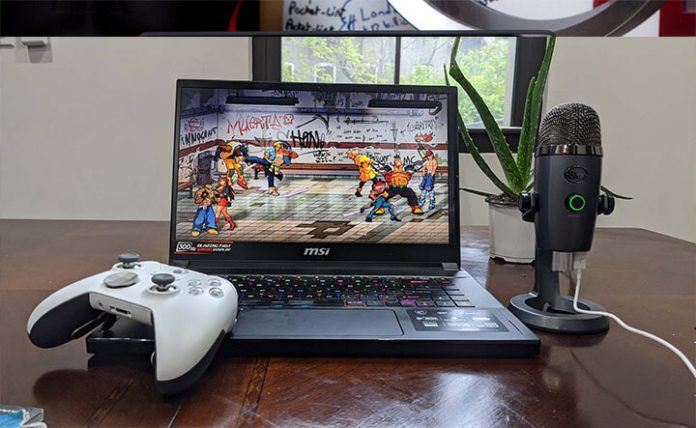 Playing Xbox One games is a lot of fun, but you must have a screen if you want to play. If you’re on the road, live in a big house with a TV, or maybe your TV just stopped working, then you got the idea to use your laptop screen as a monitor for the Xbox.

Fortunately, there are some methods that allow you to do so. You’re probably familiar with Xbox Remote Play, but you can also use an HDMI input port or capture card to physically connect your laptop and Xbox One. Let’s go through all of them and show you how to use a laptop as a monitor for Xbox One.

If your laptop has an HDMI input port on the side or back, you can easily use it to connect your Xbox One to the laptop display. Note that most laptops don’t actually have an HDMI input port, but rather an output port.

An input port allows you to connect an input device, your Xbox One in this case, and use the laptop’s screen as if it were a monitor. An HDMI out port, on the other hand, allows your laptop to use an external display, such as a TV, monitor, or projector, in addition to the built-in screen.

Unfortunately, most laptops only have one HDMI out port, which means your laptop most likely won’t allow you to use its screen as a monitor for the Xbox. You can check the manufacturer’s website or take a look at the user manual to see if your laptop has an HDMI input port.

Mostly gaming laptops have it because they usually come with high-end panels that look great and sometimes have a high refresh rate as well. The most popular laptops with HDMI input ports are the older Alienware laptops like the M18x, R3, R4, and 18.

If your laptop has an HDMI input port, setup is extremely easy in most cases.

This is how you do it:

There is a big chance that it won’t work right away. HDMI input ports on laptops are known for that because the laptop is already using your screen. You can try turning off both the laptop and the Xbox and then connecting the two devices. You can check if the display settings on your laptop are set correctly.

However, if your laptop doesn’t have an HDMI input port, don’t worry. You can use a capture card to connect the two devices. See the method below for more information.

If you own a capture card, chances are this idea has crossed your mind. Using your capture card to play Xbox One games on your laptop is very easy to set up. However, the method is not ideal as capture cards can introduce a bit of input lag, which can make some fast-paced games unplayable. Still, it’s the best option if you don’t have an HDMI input port on your laptop or other type of display.

If you don’t already have a capture card, you can get a cheap one. Keep in mind that the more you play, the more you get, so a cheap capture card won’t be as good as a high-end one used by professionals. Still, if your laptop screen is the only option you have, then it’s worth a try.

In case you are not familiar with capture cards, you can think of them as HDMI to USB adapters. They allow you to connect video input devices, such as cameras, to your laptop or computer. If you’re a streamer or want to become one, you may have already considered getting a capture card so you can use a good DSLR camera for video capture.

Using your laptop screen as a monitor for your Xbox One with a capture card is easy.

Here’s what you’ll need to do to get it working:

Once you are done with all these steps, everything should work perfectly. You will see that the Xbox One is now using the laptop screen as a monitor.

Apart from using cables, you can also stream your Xbox One games to your laptop. This will also work with normal computers. Note that streaming is very different from the previous methods because you will essentially be playing the games on your laptop, but using the Xbox One to render the games. To stream Xbox One games, both the Xbox and the laptop will need to be connected to the same local area network.

You will also need to have Windows 10 for this to work.

The main benefit is that you will not have to use any cables for it. The downside is that there can be a lot of delay. You need to have a great connection for this to work, so try using  Ethernet cables  to connect the laptop and Xbox to your router. You can also do this over Wi-Fi, but you’ll likely experience significant delays because wireless signals are significantly less stable and reliable.

Streaming your games from the Xbox is a great way to play AAA games that you might not otherwise be able to run on an older laptop.

This is how you do it:

This method is simple, intuitive and easy. However, it does require a strong internet connection to work and you will always feel a little lag that you don’t get with an HDMI cable. Still, the experience will be similar to using a capture card, as long as your connection is fast enough.

Using your laptop as a monitor for your Xbox One isn’t too difficult, especially if you have a fast connection or a laptop with an HDMI input port. Using the HDMI input port is the best way to play Xbox One games on your laptop because there will be very little delay. The Xbox will essentially treat the laptop like a monitor and you’ll see great performance and detail with this method. But since most laptops don’t have an HDMI input port, you can use a capture card.

Capture cards are very useful devices that allow you to connect a video input device to your laptop. If you’re using a DSLR or similar device as a webcam for Google Meet, Zoom, or Skype, this method is cheap and easy. The hardest step is getting it to work the first time with OBS Studio, but after that everything is smooth sailing.

But the best method you can use is the integrated one. Simply enable game streaming on your Xbox One, and then go through the quick setup required to connect the two devices through the Xbox app. You can use any Windows 10 computer to stream Xbox games. You have to connect both the Xbox and the laptop to the same network or connect them directly with an Ethernet cable.