How to use NVIDIA Broadcast with OBS Studio? 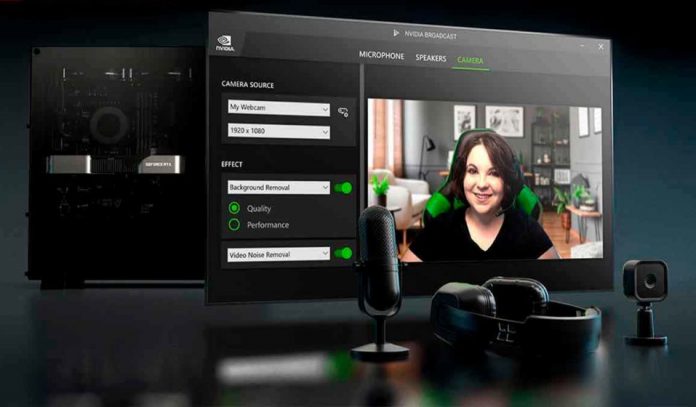 As you will surely remember, a few weeks ago we told you about NVIDIA Broadcast , or an application designed by NVIDIA to improve the quality of image and sound captured by our system , and whose output it can be used by any application that allows you to select audio and video sources. For this purpose, it takes advantage of the processing capacity of the GeForce graphics cards of the RTX 20 and RTX 30 series. And I can say, after having tried it for several weeks, that it has me very pleasantly surprised, even more so when we consider that it is a free software.

NVIDIA Broadcast setup is pretty straightforward, but there are a few things to keep in mind . And the same happens with the applications from which we want to use the image and sound. As an example, we are going to see how to do the initial configuration of NVIDIA Broadcast, then configure the sources in OBS to use the image and sound processed by the NVIDIA software.

If you don’t have it yet, obviously what you will have to do is access their website , download NVIDIA Broadcast and install it following the instructions given by the wizard . The process does not have any complications, so no indications in this regard are necessary. Once it is available on your PC, access it, so that its main interface is displayed, which you will not normally see because the program is usually kept minimized: 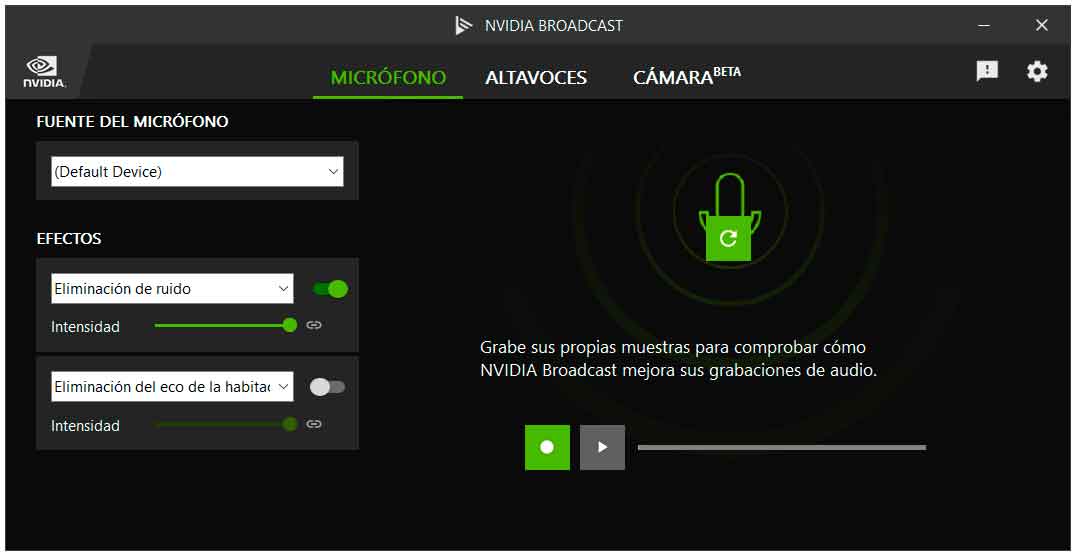 With a first glance you will have already deduced that you have to choose the audio and video sources from NVIDIA Broadcast, as well as the output you want to use. And keep in mind that, in this last point, this setting will affect how you hear all the sound from your PC whenever the program is open. Therefore, the first thing you should do is go to the Speakers section, select an audio output and use the audio sample that you can see in the central part of the window to verify that you hear the audio output from the PC correctly.

When that’s done, it’s time to configure picture and sound if you want to use NVIDIA Broadcast’s “cleanup” filters. As you have done with the output, go to both sections and choose its origins. With the microphone selected, use the controls to record a sample and listen to it to confirm that you are recording correctly.

With the camera, checking is simpler, you just have to choose the correct source, and automatically the image that the camera is capturing will be displayed on the screen:

An important detail, of course, is that NVIDIA Broadcast may not select, by default, the highest image quality. For example, in this case you have set it to 720p (1,280 x 720 dots) at 30 frames per second, even though the webcam I’m using supports 1,080p. Remember, therefore, to review this section, to choose the quality you want. Additionally, a settings icon is displayed to the right of the font selector. Click on it and you can use the window that will open to fine-tune the image quality. 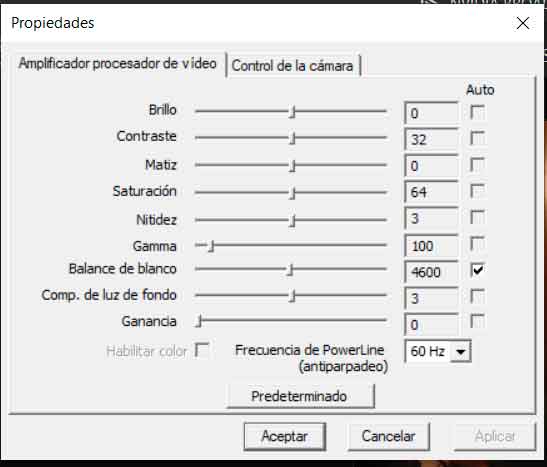 After you’ve adjusted the sources, it’s time to configure the effects. As we told you a few weeks ago, version 1.3 of NVIDIA Broadcast has substantially improved its performance, causing fewer resources to be consumed to apply them, so you can use them without penalizing the performance of your PC. To apply the first one, click on the Apply effect button that is shown under the camera selector, and use the section that will be displayed to choose one of them. This is the list of those included:

Depending on the one you choose, you will be able to make one or the other adjustments and, as you may have deduced, there are some that are incompatible with each other, specifically the three that modify the background, either by defocusing it, replacing it or simply eliminating it. Of course, even if you select an effect, it will not be applied until you press the switch shown to its right. Once this is done, you will be able to check its effect in real time: 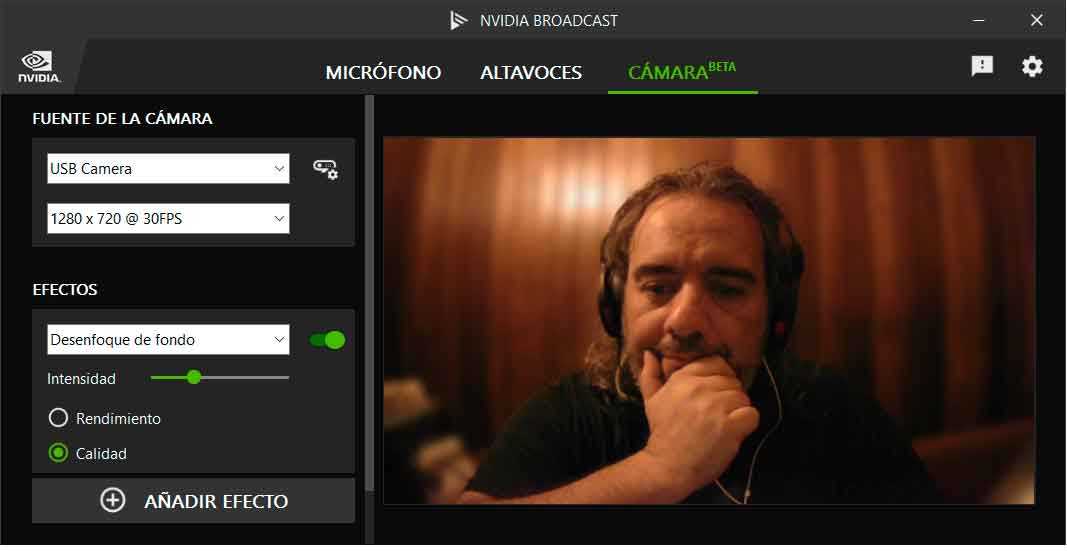 With sound capture you can also use effects to improve its quality. These are the available ones:

With them, you can process the signal captured by the microphone to substantially improve its quality.

From NVIDIA Broadcast to OBS Studio

With everything set to NVIDIA Broadcast, note that you will need to reconfigure the video and audio sources in OBS Studio. And it is that now it will be this application, and not the devices themselves, which will serve the already processed content. Therefore, if you keep the previous settings, when you open OBS you will not be able to see the effects that the NVIDIA software is applying.

Most likely you already have configured the fonts that you have used so far, for example: 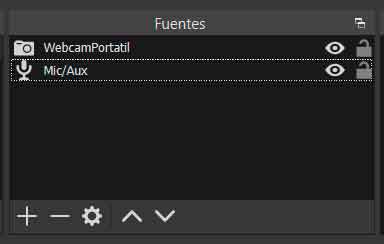 So the first thing you will have to do is delete them. To do this, choose one of them, press the – symbol at the bottom and confirm the deletion. Then do the same with the rest, if you had one for video and one for audio. The next thing, you may have guessed, is to press the + symbol and, in the menu that will appear, choose Video capture device. In the window that will appear then choose Create new, write “NVIDIA Broadcast” in the box below and confirm with a click on the OK button.

In the properties window that will then open, locate the Device section and select the Camera (NVIDIA Broadcast) entry. Then, go to the bottom of it, check the Use custom audio device entry, and in the Audio device section that will appear at that time, select the Microphone (NVIDIA Broadcast) entry. To confirm the settings click on the OK button. 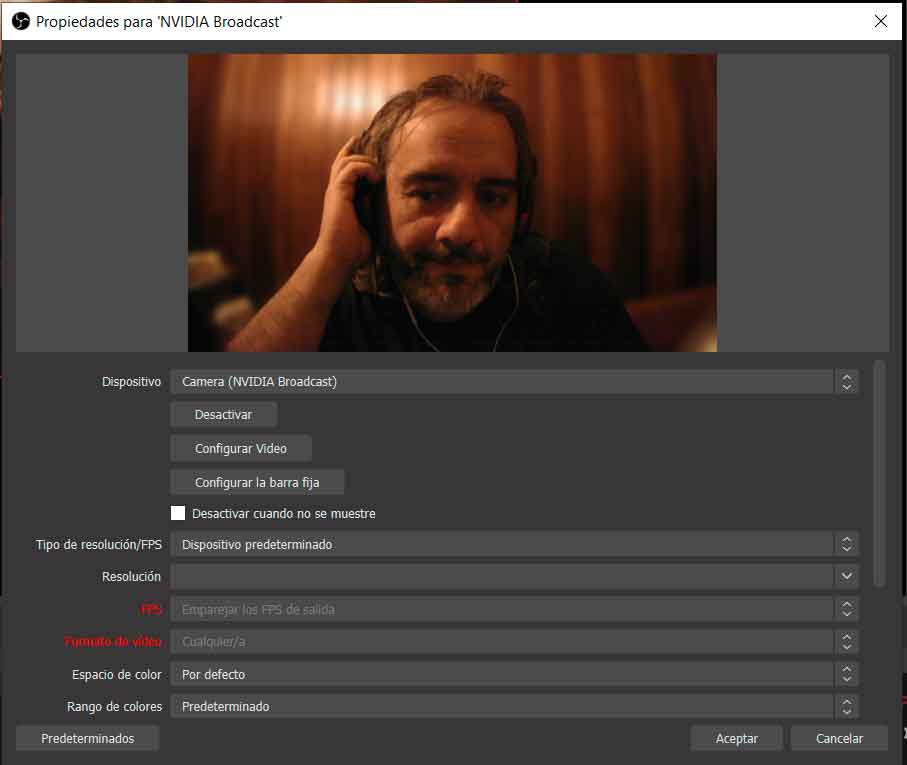 Now you only have to adjust the size and position of the camera image in the OBS Studio layout and, as you can see, all the effects applied by NVIDIA Broadcast will already be applied to the output of the program.

In this tutorial we have told you how to make this adjustment for OBS Studio, but in reality the procedure will be very similar with practically any other application, with the difference, of course, that in many cases you will not have so many configuration settings, and that you will also have to select the video and audio sources separately, which in both cases will be NVIDIA Broadcast.