Why did my text messages turn from blue to green? 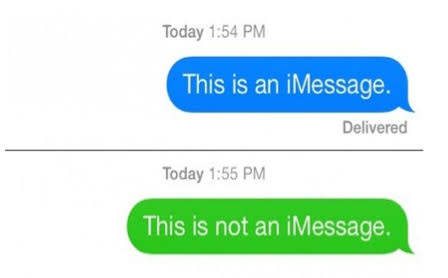 If you are an iPhone user, you may have come across conversations in the Messages app turning green instead of blue.

iMessage is a platform that allows users to send messages between Apple devices over the Internet. It works over Wi-Fi or using your mobile data plan.

This is a different technology than SMS text messaging, which uses traditional mobile phone services to send messages. These messages can be useful if you don’t have a data plan, but they are quite limited in length and only allow text.

iPhones support both iMessage text messages and SMS. So that you know what you are using at any given time, the messages you send are color-coded.

Blue means the message was sent via iMessage, while green means it was sent as an SMS text.

Now, if you’re messaging an Android user, the entire conversation will be green since iMessage only works between two Apple devices.

But if you were having a blue conversation that has suddenly turned green, there are several reasons that can explain it.

First of all, it could be an indication that the recipient has blocked your number since Apple does not send any type of notification when you are blocked. You will simply no longer be able to send messages to that number.

But the most common causes of the green message are that the person’s phone is turned off, is running out of battery, is in airplane mode, or has no internet connectivity.

The only thing you can do at such times is waiting for the recipient to come back online. Once it is, you won’t be sure if the message was delivered, as that feature is only available while having a blue conversation via iMessage.

So while it’s disappointing to see a green message appear in the middle of a conversation or when contacting a new person, the only thing you can do is trust that you haven’t been blocked or that the Android user you’re starting a conversation with a move to the iPhone one day.

Share
Facebook
Twitter
Pinterest
WhatsApp
Previous articleHow to sanitize wooden toys? Step by step to clean the child’s wooden toys
Next articleCan you leave a voicemail if your number is blocked?
RELATED ARTICLES
How To