They manage to regenerate knee cartilage with bursts of electrical current 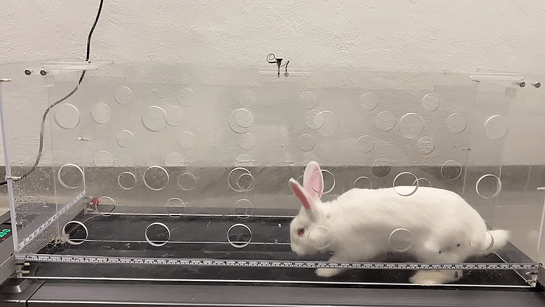 A team of bioengineers from the University of Connecticut (UConn, USA) have succeeded in reconstructing the cartilage of the knee of a rabbit using a ‘scaffold’ made of a nanomaterial that has piezoelectric properties. The breakthrough, published in Science Translational Medicine , opens up new avenues for the treatment of joints in humans.

Arthritis is a common and painful disease caused by damage to our joints. Normally, cartilage ‘pads’ protect them, but injury or age can wear them down. Available treatments try to replace the damaged cartilage with a healthy piece taken from another part of the body or from a donor, but they are complex procedures and can lead to rejection.

According to the authors, the best therapy would be to regrow healthy cartilage in the damaged joint itself. Some researchers have tried amplifying chemical growth factors to induce the body to grow cartilage on its own, and other attempts have relied on a bioengineered scaffold to give the body a template for fresh tissue. “But none of these approaches have worked, not even in combination,” they stress.

“Regenerated cartilage does not behave like native cartilage. It breaks, under the normal stresses of the joint ”, explains Thanh Nguyen , co-author of the work.

Now, Nguyen’s lab, which has also worked on cartilage regeneration, has discovered that electrical signals are essential for its normal growth.

Nguyen and his team designed a tissue scaffold made of poly-L lactic acid nanofibers (PLLA), a commonly used biodegradable polymer for suturing surgical wounds. The nanomaterial has a very interesting property, called piezoelectricity. When squeezed, it produces a small burst of electrical current.

Regular movement of a joint, such as that of a walking person, can cause the PLLA scaffold to generate a weak but constant electric field that encourages cells to colonize it and become cartilage. No external growth factors or stem cells (which are potentially toxic or at risk of unwanted adverse effects) are required and, above all, the growing cartilage is mechanically robust .

Researchers tested the piezoelectric scaffold on the knee of an injured rabbit. The animal was then put to run on an exercise treadmill and, as expected, the cartilage grew back normally

The authors tested the scaffold on the knee of an injured rabbit. They then put the animal on a treadmill and, as expected, the cartilage grew back normally.

As explained by Yang Liu , lead author of the research, “piezoelectricity is a phenomenon that also exists in the human body. Bone, cartilage, collagen, DNA and various proteins have a piezoelectric response ”.

He also points out that the approach they have followed has “many possibilities of being transferred to the clinic in the future.”

However, Nguyen prefers to remain cautious: “It’s a fascinating result, but we have to test it on a larger animal “, with a size and weight more similar to that of a human being. The team also wants to test PLLA scaffolds in older animals .

“In humans, arthritis is often a disease of older people. Young animals are more easily cured. If piezoelectric scaffolding helps older animals heal as well, it could be a real breakthrough in bioengineering, “the researchers conclude.

Share
Facebook
Twitter
Pinterest
WhatsApp
Previous articleApple Watch Series 8: what do we expect from the new generation?
Next articleThe 1000 light-year bubble that surrounds the Sun is the cradle of nearby stars.
RELATED ARTICLES
Innovation

WHEN THE TECHNICIANS WANTED TO PUT A RECORD PLAYER IN A CAR AND THEY PUT IT!

Advertising on Facebook can be directed at a single person