A DINOSAUR EMBRYO PERFECTLY PRESERVED INSIDE ITS EGG 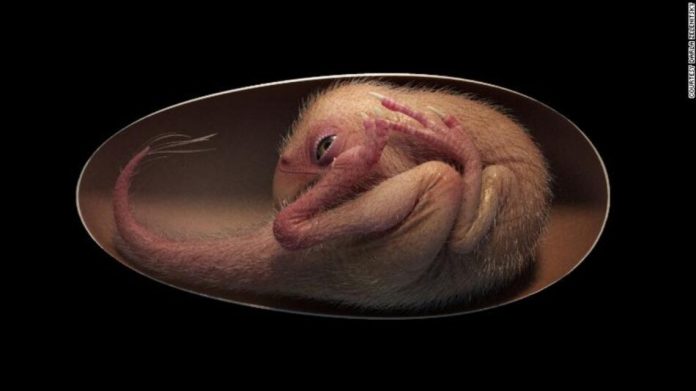 Scientists have announced the discovery of a perfectly preserved dinosaur embryo that was preparing to hatch from the egg, like a chicken

Perfectly nestled inside its egg, this embryo dinosaur was ready to hatch and go outside. The fossil has been discovered in Ganzhou, southern China, and researchers estimate that it is at least 66 million years old.

Although the species has not yet been identified with complete certainty, it is believed to be a toothless theropod dinosaur, or oviraptorosaur, and has been christened by scientists as Baby Yingliang. It measures 27 centimeters long from head to tail and rests inside a 15-centimeter-long egg at the Yingliang Museum of Natural History in China.

According to Dr. Fion Waisum Ma, author of the publication on the discovery in the journal Science , it is “the best dinosaur embryo found in history.”

Researchers from China, the United Kingdom and Canada studied the positions of Baby Yingliang and other previously found oviraptorid embryos. The discovery has also allowed researchers to better understand the link between dinosaurs and modern birds. The fossil shows that the embryo was in a curled position known as “tuck in,” which is a behavior seen in birds shortly before hatching. Oviraptorosaurs, which means “egg-thieving lizards,” were feathered dinosaurs that lived in what is now Asia and North America during the Upper Cretaceous, between 100 and 66 million years ago.

Paleontologist Steve Brusatte, who was also part of the research team, tweeted that it was “one of the most impressive dinosaur fossils” he had ever seen, and that the embryo was about to hatch.

The fossil was found in China’s Jiangxi province and was acquired in 2000 by Liang Liu, director of a Chinese quarrying company called the Yingliang Group. It was stored and forgotten until about 10 years later, when museum staff went through the boxes and unearthed the fossil during the construction of the Yingliang Stone Museum of Natural History. The museum is subsidized by the company.

It wasn’t until construction work on the museum began and the ancient fossils were sorted out that researchers noticed the egg, which they suspected contained an embryo.

Part of the dinosaur’s body is still covered in rock, and the researchers will use advanced scanning techniques to create an image of its entire skeleton.