Half a century ago, paleontologist Mary Leakey and her team discovered five consecutive footprints at the Laetoli site in Tanzania, providing the oldest unequivocal evidence of bipedalism. in hominids . At the time, it was proposed that these tracks had been made by Australopithecus afarensis , the same species as the famous ‘Lucy’ skeleton.

However, another set of footprints excavated at a nearby site called A, and later covered, sparked a debate . At first, some researchers thought they must be of a hominin type, others that they belonged to a young bear that walked on its hind legs . In the 1980s, the geologist Dick Hay , a member of Mary Leakey’s research team, dated them to 3.7 million years old using the relationship between potassium radioactive and argon (K-Ar dating) in the volcanic ash layer.

In 2019 these tracks were re-excavated and completely cleaned by a team of scientists displaced to Tanzania. The footprints were measured, photographed and 3D scanned.

Although thousands of animal fossils have been found at Laetoli, none were bear. In this way, they unequivocally determined that they were made by a hominid

Footprints are very different in bears, chimpanzees and humans. By analyzing them, the researchers were able to verify that they were very similar to those of hominids. In fact, they came to analyze on video the behavior of the wild American black bear ( Ursus americanus ), which barely walks on its hind legs. Furthermore, although thousands of animal fossils have been found in Laetoli , none were bear. In this way, they unequivocally determined that they were made by a hominid, but which one?

“These traces show that the evolution of the upright gait was more complicated and more interesting than we thought. At this time in our evolutionary history there were at least two hominins that walked differently, with differently shaped feet. This shows that the acquisition of human gait was less linear than many imagine. In other words, throughout our history, there have been different evolutionary experiments on how to be bipedal ”, declares to SINC Jeremy M. De Silva , co-author of the work, published in the journal Nature, and researcher at Dartmouth College (USA). 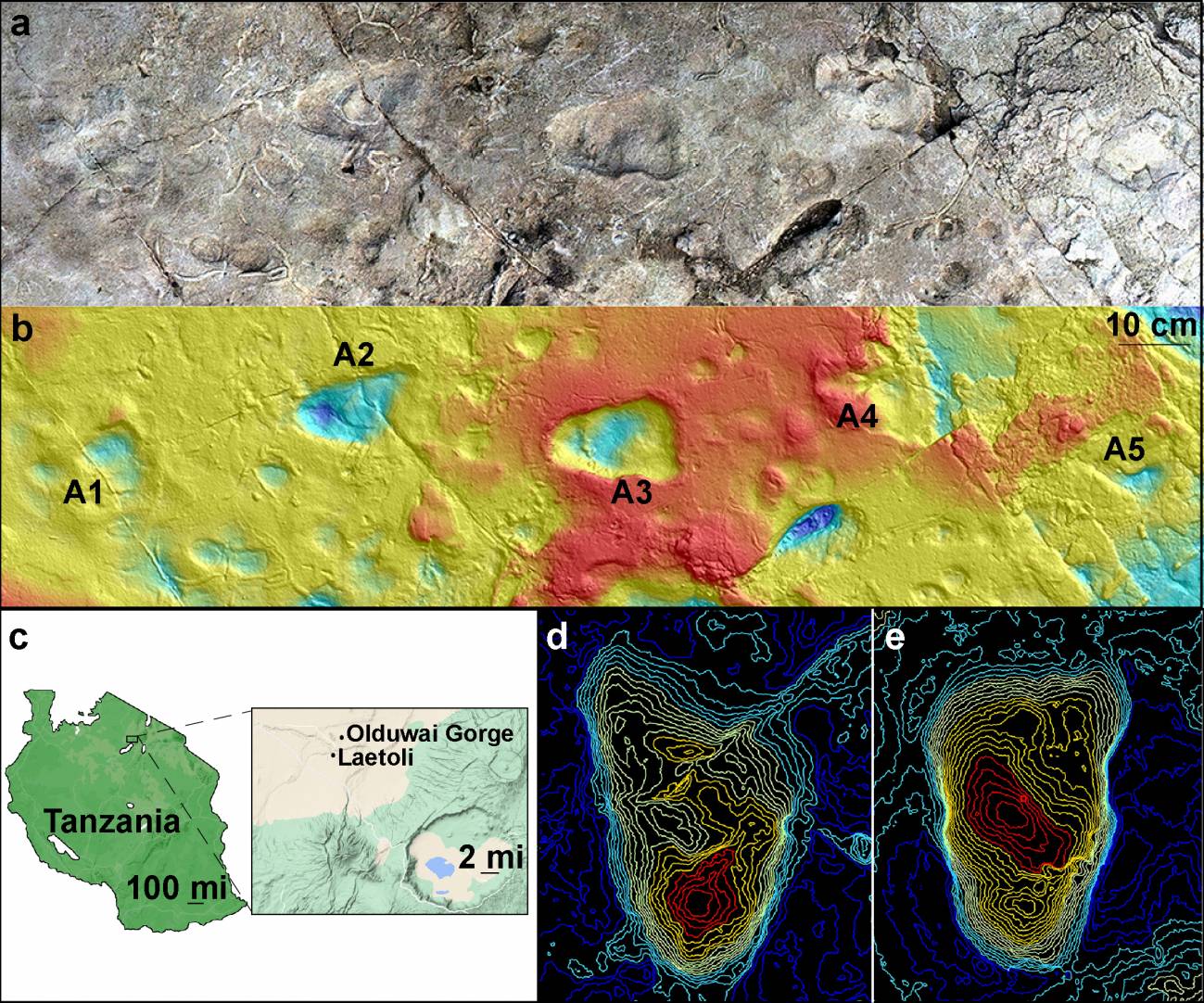 Laetoli Site A viewed by photogrammetry showing five hominid tracks (a) outline map of the site, generated from a 3D surface scan (b) map showing Laetoli, found within the Ngorongoro in northern Tanzania (c) topographic maps of footprint A2 (d) and footprint A3. / Images (a) and (b) of Austin C. Hill and Catherine Miller. Image (c): Illustration using GoogleMaps by Ellison McNutt. Images (d) and (e) of Stephen Gaughan and James Adams

A curious way of walking crossed

This hominid, which has not yet been identified, walked in an unusual way: his step was crossed [ 19459004], that is, each foot crosses above the midline of the body to touch the ground in front of the other foot.

There is evidence that different hominin species walked in different biomechanical ways, but there is no reconstructed that cross-walk like this one.

There is evidence that different hominin species walked in different biomechanical ways, but there is no reconstructed one that walks crosswise like this one

“We’re still not sure what it means. Crosswalking sometimes occurs in humans when we walk on uneven ground, which perhaps explains this strange gait. Or maybe just this individual hominin walked in a peculiar way. Or maybe an unknown species of hominin was adapted to walk this way. We will see it as more traces are discovered ”, assures De Silva.

Ellison J. McNutt , a scientist at the University of Ohio (USA), who is also participating in the study, explains that although humans do not usually take crossed steps, this movement may have produced when trying to reestablish equilibrium : “The footprints from site A may have been the result of a hominid walking through an area that was an uneven surface.”

“We cleaned the inside of the tracks and found a clear impression of an enlarged big toe , something that is only found in primates, including apes and hominins,” he continues. De Silva.

The anatomy of the hip and knee prevents bears from balancing easily on one leg. When they walk on two they wobble from side to side, producing widely spaced footprints. Yet another proof that the path made by these fossil footprints is too narrow for these animals to come from. 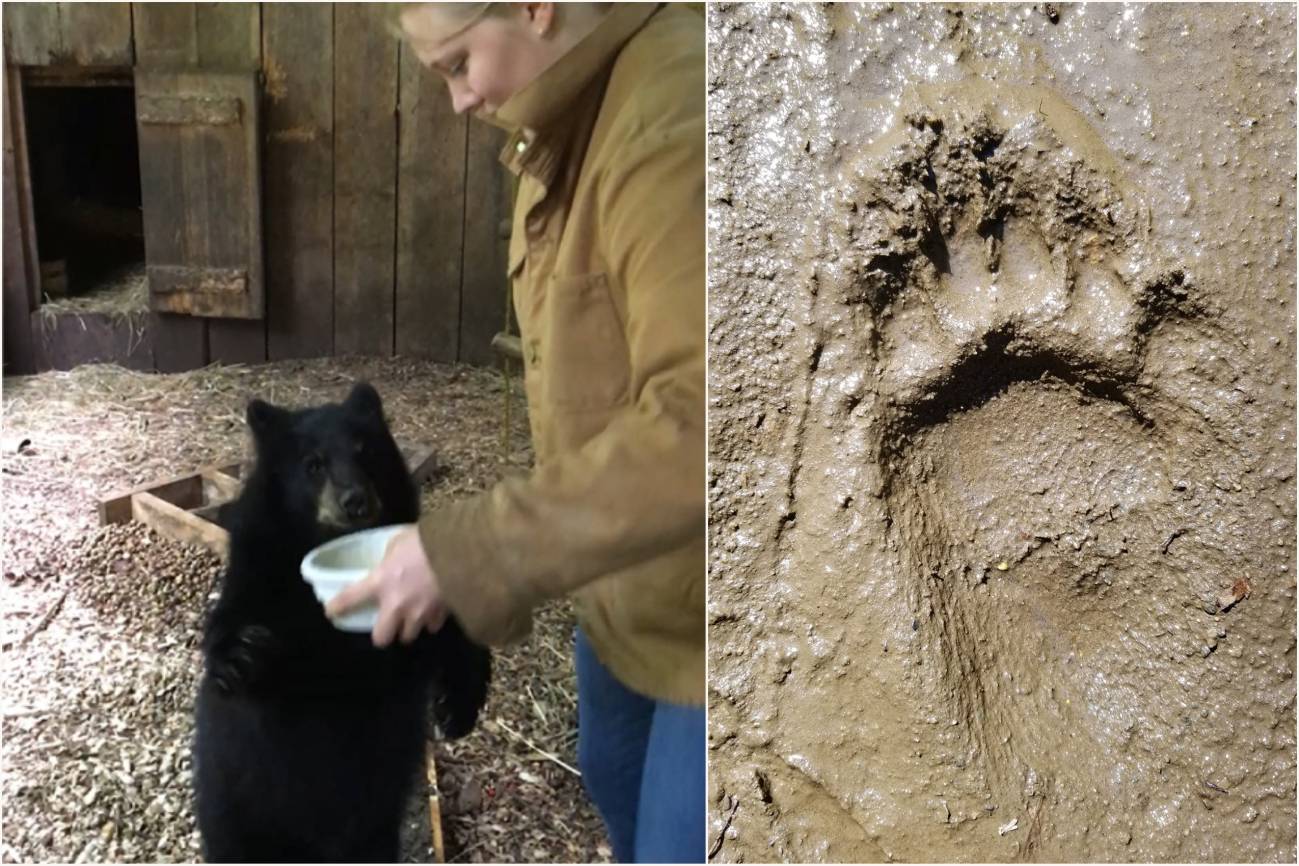 The team also compared the footprints from reservoir A and the inferred foot proportions, morphology and probable shape. walking. Thus they demonstrated that they were different from those of Australopithecus afarensis from the G and S deposits.

There are fascinating differences in shape between the tracks from Site A and those (presumably) of A. afarensis from Sites G and S

“There are fascinating differences in shape between the tracks from deposit A ​​and those (presumably) from A. afarensis from deposits G and S. The former are much wider for their length and they have a slightly more divergent big toe. In fact, in our analysis, the footprints of A are as different from the footprints of A. afarensis as a chimpanzee footprint is from a human footprint ”, the expert concludes to SINC.

These findings are part of a growing body of evidence pointing to an undervalued diversity of hominids from this era.