A technique revolutionizes the study of the composition of scorpion venom

The torrential rains that have hit the Egyptian city of Aswan , in the south of the country, last week have not only caused flooding , strong winds and power cuts, but also an invasion of Arabian fat-tailed scorpions  ( Androctonus crassicauda ), who have sought refuge in streets and houses.

The result is that hundreds of people have had to be hospitalized and at least three deaths have been registered, according to the Egyptian Ministry of Health . The main reason is the potency of the venom , composed of neurotoxins, cardiotoxins and possibly myotoxins, of this arthropod of about 10 centimeters in length.

New work has developed an innovative technique to study for the first time the genes present in the venom of these animals from the actual substance rather than the tissue of the venom gland.

Given the danger of the bite of this arachnid, common in the desert environments of North Africa and the Middle East , doses of antivenom are being administered – achieved for this species – to avoid the appearance of symptoms, such as fever, intense pain, inflammation, vomiting, muscle tremors, or breathing or heart problems, or their worsening.

For the creation of these antisera or even to find new and potential drugs , such as those intended to treat cardiovascular diseases, among other applications, the scientific community needs to have access to the toxins extracted from the gland tissue where the venom of animals such as animals is created. Scorpions. But most poisonous species have not been studied, and when they have, the death of the animal has been required.

A new work, published in the journal PLoS ONE , has developed an innovative technique to study for the first time the genes present in the venom of these animals from the actual substance rather than the tissue of the venom gland. Thus, it has been possible to determine the process by which this unique substance is produced, with the main advantage that it is no longer necessary to sacrifice the animal. 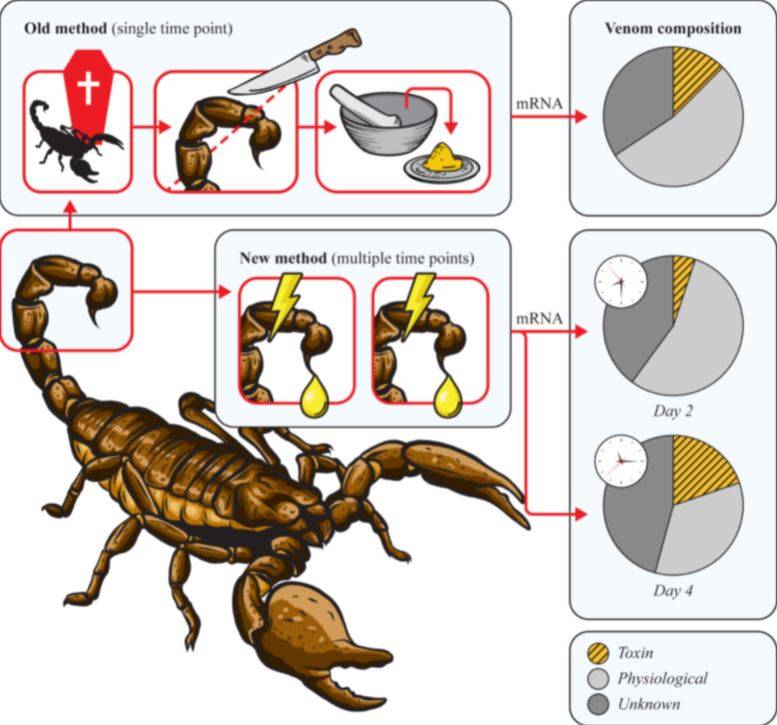 Each animal has its own poison production technique

“Thanks to this technique, we can see very precisely which genes are active at different times in the production of the venom,” says Freek J. Vonk , professor at the Dutch university and researcher at Naturalis. “This snapshot offers for the first time the possibility of studying how nutrition , the season of the year and age influence the production of poison in a single individual,” he emphasizes.

With this new method, easier, pure and specific than previous techniques, scientists can investigate what variations exist in the venom and what factors can influence them. “Every poison contains from tens to more than hundreds of different poisonous substances, called toxins , which are produced by the poison gland. After a bite or sting, these can have a toxic effect on various systems, such as nerve endings or blood circulation ”, explains Vonk.

The method now makes it possible to analyze venom variations in a large number of poisonous animals that have hardly been studied, such as scorpions, fish and even the platypus.Arie van der Meijden

But this substance is produced by animals in different ways: “Some animals, such as snakes and centipedes , have venom-producing cells that emit their venom into the storage space of that gland in small vesicles, which gives rise to a poison. relatively ‘clean’, explains Mátyás Bittenbinder , poison expert and PhD student at Naturalis and VU Amsterdam.

Others, like scorpions , allow their venom gland cells to “cut” into pieces or even completely disintegrate in the venom storage space. Therefore, they produce a venom that contains many cellular debris that comprise substances on which transcriptomics can be applied. So you can map which genes are turned on to make which proteins.

The way each animal produces the poison indicates whether the technique can be performed or not. In the case of snakes, the method does not work on them. “On the contrary, the technique now makes it possible to study venom variations in a large number of poisonous animals that have hardly been studied, such as scorpions , fish and even the platypus “, underlines Arie van der Meijden , a researcher at the University of Porto and inventor of the innovative method.

Freek J. Vonk et al. “A non-lethal method for studying scorpion venom gland transcriptomes, with a review of potentially suitable taxa to which it can be applied”  PLoS ONE