For more than 70 million years, it was there, buried, hidden at the end of the world, while the entire planet reconfigured itself over and over again. Now, Stegouros elengassen is a new species of ankylosaurus , a two meter long herbivore with a curious sword-shaped tail , has made its appearance.

Decades, centuries, millennia, conquests, wars, revolutions, governments, fashions and pandemics followed one another until one day in February 2018 , in the most extreme, windy and desolate conditions of Chilean Patagonia, a team of curious professionals, finally found his remains. After all that time, that strange armored dinosaur would rise again from oblivion. Today, after being examined and scanned in detail, it lands in the journal Nature .

We did not expect to find the remains of an ankylosaurus, that is, a peculiar group of armored herbivorous dinosaurs that have bones in their skin and a curious tail that they used as a weapon

“It was a great surprise,” Chilean paleontologist Sergio Soto-Acuña from the Universidad de Chile tells SINC. “We did not expect to find the remains of an ankylosaur, that is, a peculiar group of armored herbivorous dinosaurs that have bones in their skin and a curious tail that they used as a weapon,” he adds.

The first time the world was captivated by these prehistoric animals was in 1906 when the fossil hunter Barnum Brown unearthed the first known specimen in the Hell Creek Formation of Montana, USA. in the same area where the first Tyrannosaurus rex had been found in 1902.

Since then, a great variety of fossils of this species have been found especially in North America and Asia . But in the southern hemisphere they are very scarce, rare and little known: in South America , fragmentary remains have been found in Argentina in the 90s. The only ones to which they have been assigned names are Kunbarrasaurus ieversi in Australia and Antarctopelta oliveroi –the first dinosaur found in Antarctica – named by Argentine scientists Leonardo Salgado and Zulma Gasparini .

For this reason, the new member of the great family of South American dinosaurs is very intriguing. Discovered in the Region of Magallanes , in the extreme south of Chile , its name, Stegouros elengassen, comes from the Greek stego (roof) and uros (tail), for its striking covered tail, and elengassen , referring to an armored beast from the mythology of the local Aónikenk (or Tehuelches) people ).

Its discovery has caused quite a stir in local science: it is the most complete dinosaur ever found in that country. “It is a milestone for Chilean paleontology”, warns the biologist Alexander Vargas , from the Laboratory of Ontogeny and Phylogeny of the University of Chile. “It is the first time that an investigation carried out entirely by Chilean scientists, with the support of Argentine technicians, and with completely national funding has been published in a high-level journal such as Nature ,” he emphasizes.

Under the shadow of the pumas

But finding this dinosaur was not an easy task, especially due to the variable weather conditions of the area known as valley of the Río de las Chinas , near Cerro Guido, which is 1,270 meters high.

Once in the laboratory, the scientists realized that they were looking at a two-meter-long dinosaur out of the ordinary. Stegouros elengassen is the first species of ankylosaur named in South America

“It is a very hard place to work. You have to be in good physical condition. There are steep regions. Climate changes are abrupt: in a single day it can rain heavily, the wind blows strongly and it snows even in summer. We were even visited several times during the night by pumas ”, the Argentine Jonatan Kaluza , a paleontology technician at the Félix de Azara y Conicet Natural History Foundation, points out to SINC. with Chilean researchers in the prospecting, extraction and conservation of fossils.

“During the first days of the expedition organized by the Chilean Antarctic Institute, we only found microfossils , nothing medium or large to extract. With five days to go to finish the campaign, we approached the camp of some colleagues from the University of Texas who were working in the area, and they alerted us that they had seen what they believed to be the remains of a small animal, ”he continues.

The first impression that South American paleontologists had when they encountered these somewhat eroded vertebrae that emerged on the surface of the ground was that it was an ornithischian , a medium-sized herbivorous dinosaur that was it moved on its hind legs, similar to one found on the Argentine side by the team led by paleontologist Fernando Novas who named it Talenkauen santacrucensis .

“In a race against time, we started working at six in the morning and didn’t stop until 11 or 12 at night, on the verge of hypothermia,” recalls Kaluza, who broke a rib in the process. “We managed to extract the material, four blocks of between 200 and 350 kilos each. We use an ATV that they lent us in a nearby room as a stretcher to transport the blocks with fossils ”, he details.

Once in the laboratory, the scientists realized that they were facing a two-meter-long dinosaur out of the ordinary. “We were hopeful of ever finding an ankylosaur, especially knowing that 74 million years ago bridges were sporadically formed between South America and Antarctica,” says Vargas. “His limbs are very slender. When we cleaned the material his incredible and sophisticated glue appeared. We were fascinated because it was something never seen before: a unique biological weapon, a weapon that reminds us of an Aztec sword ‘macuahuitl,‘ he points out.

The new dinosaur has primitive features in the arms and pelvis, characteristics similar to those of other armored dinosaurs with conical bone beaks such as the stegosaurus

Stegouros elengassen is the first species of ankylosaur to be named in South America, and is distinct from the northern ankylosaurs that developed a mace and barbs as weapons on the tail. The new dinosaur, on the other hand, has primitive features in arms and pelvis , characteristics similar to those of other armored dinosaurs and with conical bony spikes such as the stegosaurus that would have retained them from a common ancestor and were lost in their northern cousins.

“That is why we call it ‘transitional ankylosaurus’ because it is a evolutionary link between older forms of armored dinosaurs and ankylosaurs,” Vargas indicates. “ Stegourus is related to the ankylosaurs found in Antarctica and Australia, they share evolutionary novelties. All of this tells us about a lineage of southern ankylosaurs, ankylosaurs that separated very early from those of other regions, ”says the expert. 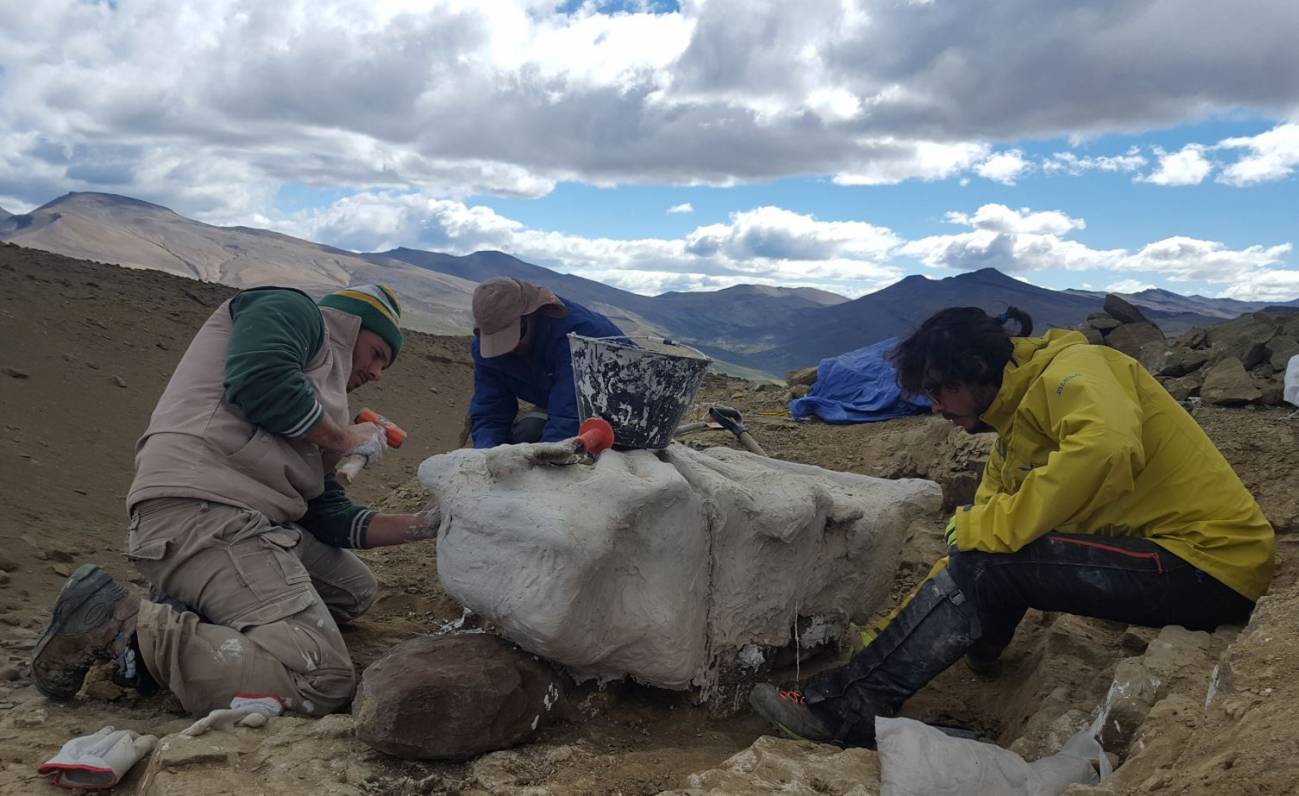 The fossils were found in an area known as the Río de las Chinas valley, near the 1,270 m high Cerro Guido, with variable weather conditions. / Jonatan Kaluza

A dam that is difficult to digest

The Las Chinas river valley is the richest paleontological site in Chile. The place was found by the paleobiologist Marcelo Leppe in 2011, intrigued by the Cretaceous flora record. In 2013, paleontologists found fragments of hadrosaurs or duck-billed dinosaurs there. In 2015, parts of a titanosaur . They were followed by remains of small mammals, turtles and marine reptiles such as plesiosaurs and mosasaurs .

What today is a windy and desolate steppe, more than 70 million years ago was an area populated by humid forests and rainy , with ferns and conifers and a temperature higher than the current one, although with a tendency towards a cooling.

The evidence indicates that Stegourus lived in a delta that opened into a fluvial fan like the Nile, with winding rivers and islands that formed between them

Evidence indicates that Stegourus lived in a delta that opened into a fluvial fan like the Nile, with winding rivers and islands forming between them. It shared the environment with some mammals without descendants today such as the Orretherium , similar in appearance to modern skunks, and the Magallanodon , an otter-sized herbivore, as well as the tortoise Yaminuechelys , whose fossils were reported by this team of scientists in recent years. “We also found remains of carnivorous dinosaurs but we are only now studying them,” reveals Soto-Acuña.

For these predators , Stegourus would have been difficult to chew and process because all their skin had a mesh of osteoderms , that is, , small bones that gave it an appearance similar to that of modern armadillos .

Perhaps this almost impenetrable armor explains the evolutionary success of ankylosaurs, animals that appeared on Earth in the mid-Jurassic, about 160 million years ago, and existed until the end of the age of dinosaurs. , which ended 65 million years ago. They lived on the planet for almost a hundred million years.

Scientists do not know if these slow-moving animals moved in herds, if they cared for their young, how long they lived, or how they mated.

Thanks to studies conducted on the skull of ankylosaurs found in Asia, researchers estimate that they had an extremely developed sense of smell , which probably helped them to search food and to sense in time that the predators were approaching.

They also know that their brains were small, that they heard low-frequency sounds, between 300 to 3,000 hertz, and that they had a narrow beak to help them pluck leaves from plants. 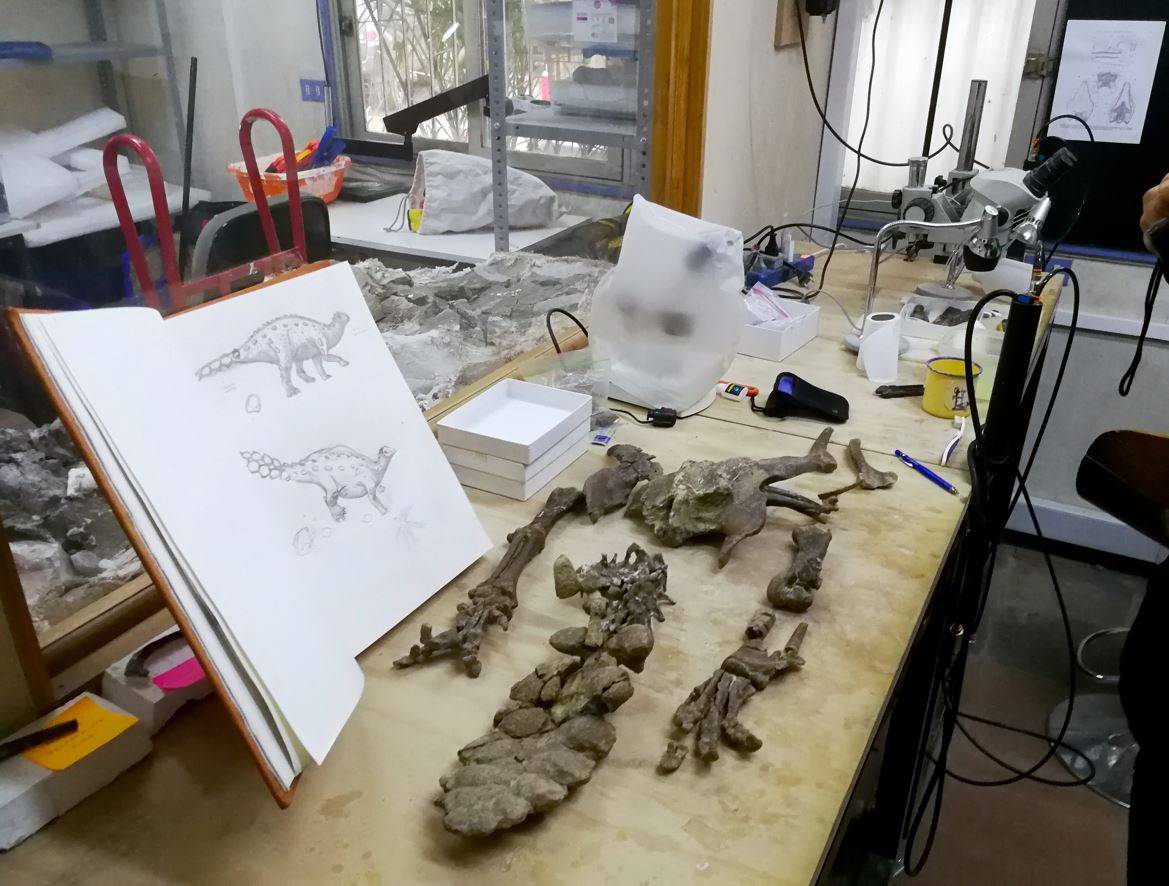 The explosion of Chilean paleontology

The appearance of so many fossils in this region in southern Chile may be due to the fact that the area in its time turned out to be a “ biological trap ” that allowed the remains of Stegourus [ 19459004] will keep as well.

“Probably the animal was trapped in the sediment and could not move or was dragged by a current,” paleontologist Carolina Simon Gutstein , who participated in the research, explains to SINC. “The remains of his body that are not present may be due to some scavenging activity carried out by other species or the decomposition of the specimen itself when it was exposed,” he adds.

Regardless of how he died, his discovery has shaken Chilean science. This is the fourth dinosaur named in Chile, after Chilesaurus diegosuarezi , Atacamatitan chilensis and [19459003icana Arackar licantay 19459004] .

“It is incredible that it is so complete. This makes it unique ”, acknowledges Marcelo Leppe, director of the Chilean Antarctic Institute. “All this work has been a paleontological school for a country that does not have a long tradition in this discipline, unlike Argentina, which has many more paleontologists and institutions working. It also has tremendous social significance in the Magallanes Region. Paleontology can contribute a lot to tourism and culture. We believe that these findings are putting the region on the world paleontological map. ”

Researchers hope that this dinosaur is a before and after in Chilean paleontology, as was the discovery in 1985 of Carnotaurus for Argentine paleontology. And especially, that this discovery economically boosts more scientific projects and more collaborations, and at the same time attracts students to dedicate themselves to the profession considering that today there are more materials extracted than people to examine them.

“Surely this research will motivate more young people,” expects biology student Bárbara Aravena , who participated in the campaign and helped in the research. “And it shows that research with an impact on a world scale can be done in Chile, despite the fact that the country does not allocate so many resources for science. Let’s hope that from this discovery this changes ”, ditch.