Did eating meat make us human? 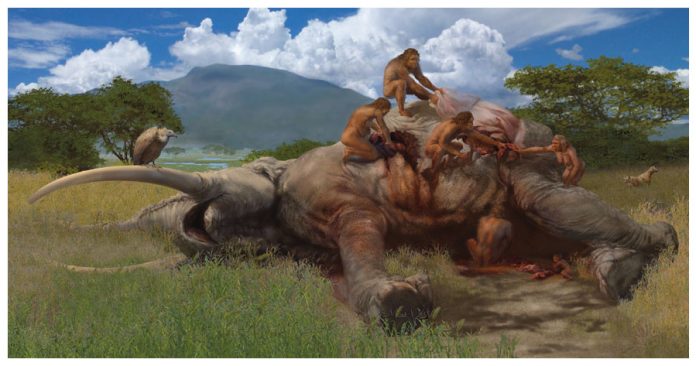 Over the course of six million years of human evolution, the size of the brain increased by 300 percent. Was meat consumption the cause?

Our huge and complex brains can store and process decades of information in fractions of a second, solve multifactorial problems and create abstract ideas and images. It is an indisputable prodigy, which we owe to evolution, and which houses the foundations of humanity. The relative size of the human brain, relative to the rest of the body, is the largest of any species. What made him grow so tall?

Many scientists bet because the increase in meat in the Paleo Diet , a moment in evolution had a lot to do with the development of the brain of our ancestors. The contribution of calories that the meat supposed, according to this hypothesis, allowed the brain and the body of one of our first ancestors, Homo erectus , to increase in size.

To affirm that the consumption of meat increased, they are based mainly on fossil remains found in ancient archaeological sites from two million years ago, because then marks begin to appear on animal bones that correspond to having been eaten by a human. But, before they did not eat meat?

However, a new study published in PNAS argues that the evidence behind this hypothesis is statistically flawed. Even before the study, many experts suspected that the link between carnivores and larger brains and bodies in early humans was not entirely clear.

The new study, led by W. Andrew Barr , paleoanthropologist at George Washington University, reviews the data on the appearance of carnage marks in nine archaeological foci of early human activity in East Africa, from 2.6 million to 1.2 million years old.

What he has found is an interesting bias maintained over time, and it is that, as seems obvious, more remains with butchery marks are found in those more studied sites, that is, those that are more superficial and accessible. . This does not allow establishing as a conclusion that the consumption of meat increased, but it is necessary to study more in depth previous deposits.

Each of these sites contains multiple layers of sediment; the deeper the layers, the older the treasures they contain.

Layers that are between 2.5 and 2 million years old are simply not as exposed, and therefore not as easy to study.

Did our ancestors eat less meat before that date? Well, according to this study, it is not possible to give a conclusive answer.

According to the study, meat consumption remained essentially constant between 2.6 million and 1.2 million years ago.

It could not have been the meat

Instead of a rise in meat consumption, there are other explanations for humanization associated with brain size.

For example, the establishment of the kitchen, which makes food easier to digest, may have driven higher calorie intake and thus larger brains.

Humans were also able to get more calories as their groups became more socially complex. An extended family hunting and gathering for the group provides a greater amount of food for the whole family. This is known as the “ grandmother hypothesis”.

Thus, the “meat made us human” hypothesis may be too simplistic.