Very few recorded burials from early Mesolithic are known. One of them is that of the cave in Liguria (Italy) , which has been discovered by an international team of researchers and is the oldest documented burial of a girl in the European archaeological record.

Dating back 10,000 years, adornments including more than 60 perforated shell beads, four pendants, and an eagle’s claw were found alongside human remains. For scientists, it would be a apparently egalitarian funeral treatment of a newborn girl whom they have named ‘Neve’.

“Neve means snow and it is a turn towards the valley of the river Neva, where the cave is located. It is a beautiful word, which we thought fit with the beautiful discovery of this girl ”, Sarah Erickson , a scientist at the University of Colorado in Denver (USA) and co-author of the research, tells SINC .

“There is a decent record of human burials before about 14,000 years ago. But the late Upper Paleolithic and the early Mesolithic are more unknown in terms of burial practices. Baby burials are especially rare, so Neve adds important information to help fill this gap, ”explains Jamie Hodgkins , paleoanthropologist, associate professor of anthropology at the same institution. The excavations and the analysis of the fossils are published this week in the journal Scientific Reports .

With an antiquity of 10,000 years, together with the human remains ornaments were found that include more than 60 perforated shell beads, four pendants and a claw of an eagle owl

Claudine Gravel-Miguel , postdoctoral researcher at the Institute of Human Origins of Arizona State University (USA) and also co-author of the article, was in charge of performing the analysis of the ornaments .

“I was digging in an adjacent place and I remember looking and thinking: that’s a rare bone. It was immediately clear that we were not only dealing with a human skull, but that it was also of a very young individual. It was a very emotional day ”, affirms the scientist about the moment of the discovery.

The team first discovered the burial in 2017 and fully excavated the delicate remains in July 2018. Hodgkins worked with her husband Caley Orr, Ph.D., paleoanthropologist and anatomist at the University of Colorado School of Medicine (USA).

Arma Veirana , another cave located in the pre-Alps of Liguria, in northwestern Italy, is a place much visited by local families. Groups of looters also discovered the site, and their excavations uncovered late Pleistocene tools that drew researchers to the area.

The team spent their first two seasons of excavation near the mouth of the cave, working on the stratigraphic layers that contained tools more than 50,000 years old

The team spent their first two seasons of excavation near the mouth of the cave, working on the stratigraphic layers that contained tools over 50,000 years , typically associated with Neanderthals. in Europe.

In addition, they found food scraps , such as bones marked with cuts from wild boar and elk, and pieces of charred fat. To better understand the cave’s stratigraphy in relation to the artifacts, they needed to uncover possible Upper Palaeolithic deposits.

As they explored further afield, they began to unearth beads of perforated shells . Hodgkins checked them in the lab and found that there was something else. A few days later, using dental tools and a small brush, they found the girl’s cranial vault and articulated lines of perforated shell beads.

A baby who died shortly after birth

Radiocarbon dating determined its age, and analysis of the amelogenin protein and the Ancient DNA revealed that the baby was a girl belonging to a lineage of European women known as the haplogroup U5b2b.

“The Mesolithic is particularly interesting. It followed the end of the last Ice Age and represents the last period in Europe in which hunting and gathering were the main way to earn a living. So it’s really important to understand human prehistory, ”emphasizes Caley Orr.

Detailed virtual histology of the girl’s teeth showed that she died between 40 and 50 days after birth. Also, prior to his birth, he experienced stress that briefly stopped the growth of his teeth. Carbon and nitrogen analysis of the teeth revealed that the mother had been fed a terrestrial diet. 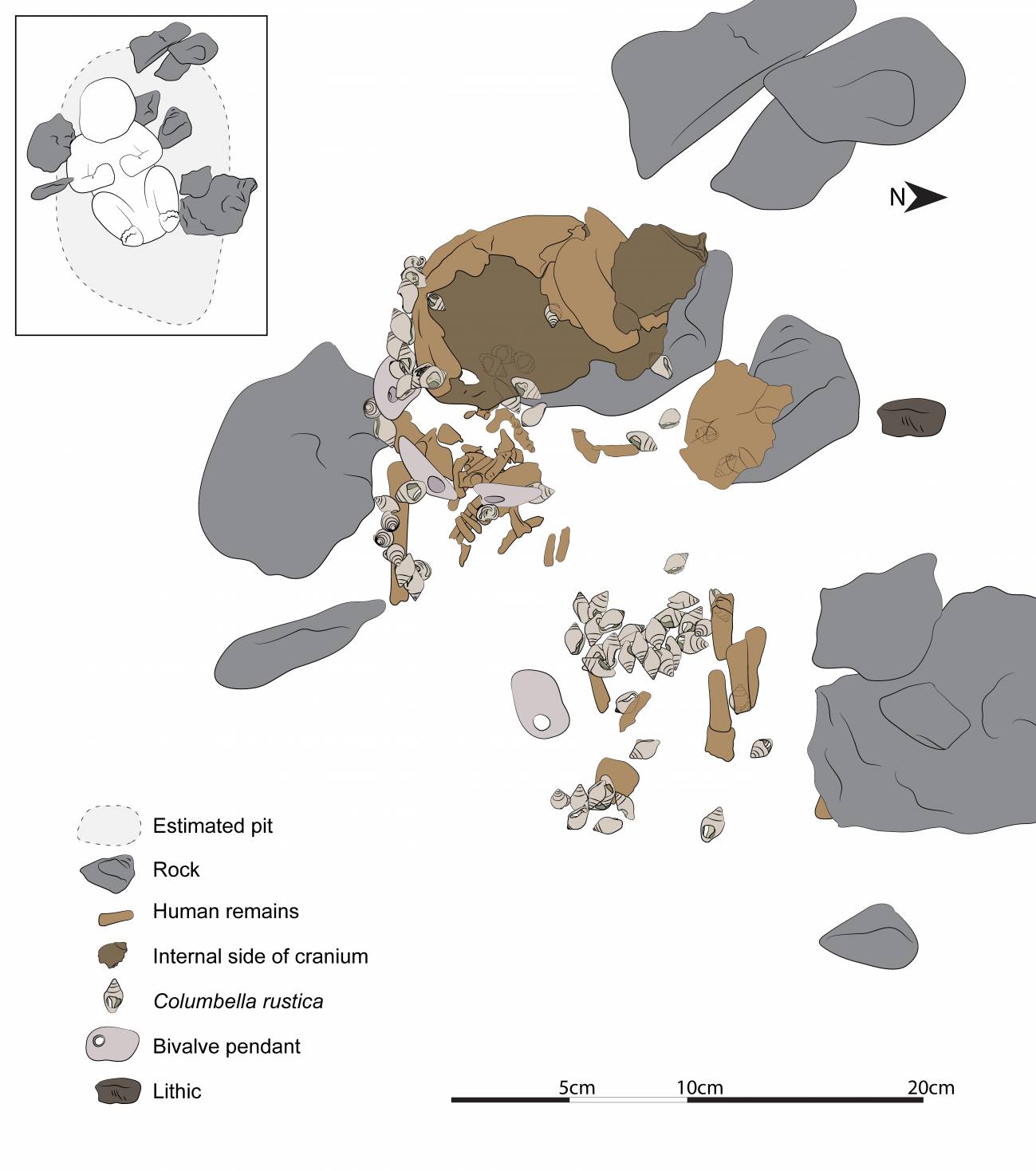 Illustration showing the placement of beads and shells along with the skull. / Claudine Gravel-Miguel

Girls with full rights in distant parts of the world

This burial, along with that of a woman of similar age from the Upward Sun River site in Alaska, suggests to Hodgkins that the recognition of girls as full-fledged persons has deep roots in a common ancestral culture, shared by the peoples who emigrated to Europe and North America. Or it may have arisen in parallel in populations across the planet.

As archeology has historically been viewed through a male lens, the researcher is concerned that many stories have been lost.

“Right now, this is the oldest identified female infant burial in Europe. I hope that stops being the case quickly. Archaeological reports have tended to focus on male roles and stories, and in doing so they have left many people out of the narrative. Protein and DNA analysis are allowing us to better understand human diversity and status in the past. Without it, this highly decorated infant burial could have been assumed to be masculine, ”argues Hodgkins.

For Erickson, “Buried children provide a unique window into the age when people from the past were considered full members of their societies. This discovery shows that in this Mesolithic group, even newborn girls were treated with the consideration given to other people in their group ”.

In Western society, archaeologists have historically assumed that figureheads and warriors were male. But DNA analysis has shown the existence of Viking warriors , non-binary leaders and powerful rulers of the Bronze Age.

“We believe that including Neve as a full member of your group is an important lesson that we must learn today. In our earliest human past there is a history of respect bestowed on the younger female members of the group, ”asserts Erickson.

“The finding of a burial like Neve’s is a reason to look more critically at the past of archeology. It is about increasing our knowledge of women, but also about recognizing that we, as archaeologists, cannot understand the past through a singular lens. We need as diverse a perspective as possible because humans are complex, ”concludes Hodgkins.