Female dolphins have a functional clitoris 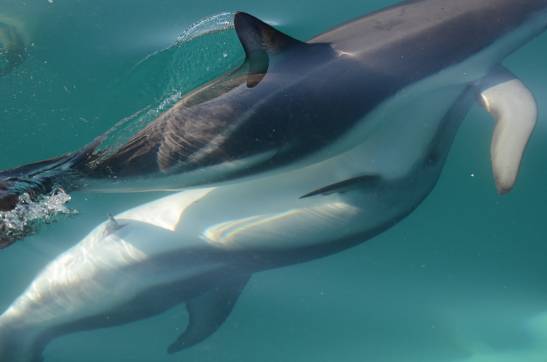 Like humans, female dolphins have a functional clitoris , according to a study published in the journal Current Biology . This is because they have a similar structure to this sexual organ, with a large number of sensory nerves and erectile bodies, located at the entrance to the vagina.

“The dolphin clitoris has many characteristics that suggest that it functions to provide pleasure for females,” states Patricia Brennan , lead author of the study and assistant professor of biological sciences at the Mount Holyoke College of Massachusetts.

Dolphins have a similar structure to the clitoris, with a large number of sensory nerves and erectile bodies, located at the entrance to the vagina

Scientists already knew that dolphins were very social animals, and that they have sex throughout the year as a way of forging and maintaining social bonds. Furthermore, females have been observed to have a clitoris positioned in a location that would make stimulation likely during copulation. Other works also indicated that this organ is rubbed against each other with the snout, the fins and the tail fin.

Similarity between humans and dolphins

So Brennan and his team decided to examine the clitoris of these animals more thoroughly. To do this, they carefully observed the sexual organs of eleven females that had died naturally, in order to determine the presence, shape and configuration of the erectile bodies . They also studied how nerve fibers traverse tissues. Their findings support the notion of a functional clitoris in dolphins.

“Like the human clitoris, that of dolphins has large areas of erectile tissue that fill with blood,” says the researcher. The shape of erectile tissue changes when animals become adults, suggesting that it takes on a functional role .

Studies also show that the body of the clitoris has large nerves and many free nerve endings just below the skin, which is much thinner than the surrounding skin. They also found genital corpuscles very similar to those described on the human clitoris and the tip of the penis, and known to be involved in the pleasure response.

Brennan highlights the similarity between the erectile bodies of these cetaceans and humans. “Given that the entire pelvis of dolphins is so different from that of humans, it was surprising to see how similar the shapes were,” emphasizes the expert. “Just as striking was the size of the nerves in the body of the clitoris. Some were more than half a millimeter in diameter. ”

The scientist explains how the study of the evolution of the vaginas in dolphins aroused her interest in the functionality of this organ.

“Every time we dissected a vagina, we saw this huge clitoris and we were curious to know if someone had examined it in detail to see if it functioned like a human clitoris,” he says. “We knew they have sex not just to reproduce, but also to solidify social ties, so it seemed likely that the clitoris could be functional.”

Every time we dissected a vagina, we would see this very large clitoris, and we were curious to know if someone had examined it in detail to see if it functioned like a human clitoris

Patricia Brennan, author of the study

Researchers note that little study has been made of this organ and female sexual pleasure in nature. In fact, the human clitoris was not fully described until the 1990s.

“This gap in the study of female sexuality has left us with an incomplete picture of the true nature of sexual behaviors . Studying and understanding these behaviors in nature is a fundamental part of understanding the animal experience and may even have important medical applications in the future ”, concludes the expert.

His team will continue this type of research in dolphins, as well as other vertebrates, with the aim of filling in these gaps in knowledge.