PABLO NAVARRO: “THESE DINOSAURS RAN AT 45 KM PER HOUR” 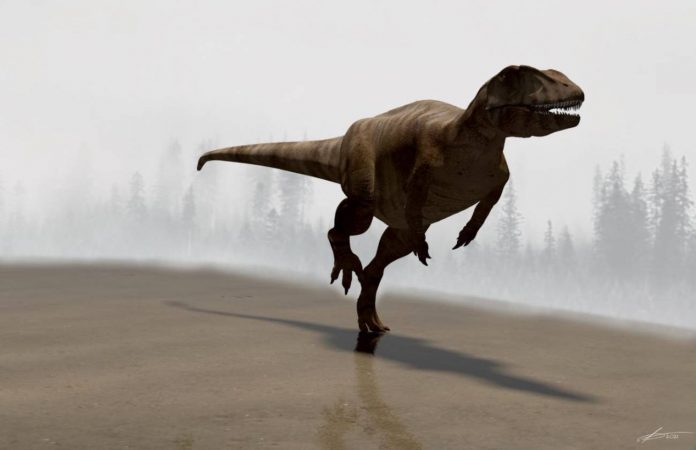 There are very few traces in the world of dinosaurs running, as in La Rioja. There, by analyzing their tracks, the researcher Pablo Navarro has managed to calculate how fast the fastest dinosaurs on Earth were going

Now we know something more about some of the fastest two-legged carnivorous dinosaurs of the Lower Cretaceous (between 145 and 100 million years ago), known as theropods, thanks to a study led by the researcher at the University of La Rioja, Pablo Navarro Lorbes .

According to the finding, these animals ran through what we know today as La Rioja, and could reach 45 kilometers per hour, which makes them the third fastest of their species.

Recreation of a Carcharodontosaurus on the run from the investigation of its fossilized tracks. Source: Francesc Gascó

In the article, published in the journal Scientific Reports of the Nature group , scientists from the Complutense University of Madrid, the University of the Basque Country, the National University of Río Negro in Argentina, and the Center for Paleontological Interpretation of La Rioja.

The analyzed fossil footprints, or also called ichnites, have been located in two deposits in the municipality of Igea, in La Rioja. One of them, La Torre 6A, contains five footprints and the other, La Torre 6B, seven. All of them three fingers and longer than wide.

Pablo Navarro on the left, at the excavation site. Source: University of La Rioja

Many still wonder what would have happened if dinosaurs had not become extinct, even if it was necessary for the appearance of humans. Years ago, some theories claimed that they disappeared due to volcanic activity, however, others pointed to the great Cretaceous extinction caused by a large asteroid that killed 75% of life during that period.

This last hypothesis was confirmed by a team from Yale University last year. In their report , they showed that the cause of the disappearance was due to an asteroid and not for any other reason, since the volcanic eruptions occurred much earlier.

What is the study carried out by the University of La Rioja?

The study has focused on analyzing two traces of La Rioja. When we analyzed them at first, we already saw that they could be tracks of dinosaurs running through the distance between tracks . We have used a series of formulas that are applied in these cases to calculate the speeds of the dinosaurs when they were walking on that surface and the results returned quite high speeds.

The second part of the work has been to compare these results, both with other traces that are published around the world, and with the speeds estimated that these animals could reach, which are calculated in other studies by biomechanical models.

“Although the speeds are much lower, we would be talking about the fastest predators in its ecosystem, such as a cheetah”

The results have shown that these tracks that we have measured coincide quite well with the estimated speeds for dinosaurs of this type and of this size. There are very few traces in the world that are of running dinosaurs.

How are those formulas that you have used?

Thanks to this relationship, we can calculate the speed that the animal was carrying in each step it took. We can even make graphs of the evolution of speed along the trail. One of the traces of the La Torre 6A site. 10 cm scale. Source: Pablo Navarro Lorbés

How big were these theropods?

The size that we have calculated for these animals would be a height up to the hips of between 1.1 to 1.4 meters, which in total height of the animal could be between 1.5 and 2 meters. The length would be about 4 or 5 meters from the muzzle to the tip of the sole.

In the article they reflect that, in addition to being fast, they were also agile, right?

Yes, these could run at 45 kilometers per hour, and they are between the third and fourth fastest in the world. There are two tracks that are a few kilometers faster up to 55 kilometers per hour, what happens is that the speed of the track of the fastest one is calculated only with two tracks and you have to take it a bit with tweezers. Those two trails that are faster are from Utah, and then there’s another trail from Texas that was posted in the ’80s, with about the same speed.

In the La Rioja area, the animals walked on mud sediments that, when the water level rose, were buried by new sediments allowing their conservation

On one of our trails, in the last footsteps we see a change of direction with a small change in speed at one point, and then it recovers again. The change of direction is to the left. Being able to maneuver and change direction at those speeds indicates that they were quite agile animals, they could maneuver quite efficiently.

The traces of the change of direction seem to me the most beautiful of these two sites. You can see very well how the impression of the footprint varies because the animal, instead of just running in a straight line, is impressing the lateralized footprint, pushing to one side to move.

What characteristics did these dinosaurs have? With what current animal could we compare it?

Theropods are carnivorous animals that, living in these ecosystems, moved in search of food. With the data we have, we cannot say exactly what they were doing, but the possibilities are similar to those of a current animal that runs when trying to hunt prey or flee from danger. Although the size seems very large, they are medium-sized theropod animals, so there would be other larger ones in their ecosystem that would pose a threat to them. Although the speeds are much lower, we would be talking about the fastest predators in its ecosystem. For example, today it would be a cheetah, a relatively fast hunter.

What is the process like until you find these kinds of discoveries?

These traces were discovered in the sites where they are found in the 1980s, and in one of the traces there were already a few uncovered traces. At a nearby site, two footprints were found that were quite far apart with a footprint in the middle, and it was suggested that it might be something similar.

So we, at the beginning of the year, what we did was a field campaign in which we cleaned the deposits and discovered three more tracks in the case of the deposit that had only two tracks, and one more track in the other. Once we cleaned the entire site, we did what is usually done now, photographing the site to generate three-dimensional models that allowed us to work remotely, because the team of authors are from different places. It allowed us to work on these measurements from La Rioja, the Basque Country and even from Argentina. Why is the Cameros Basin, between Soria, Burgos and La Rioja, an area that stands out in dinosaur footprint sites?

From what has been seen in other studies, the environmental and geological conditions that existed were very favorable for the conservation of footprints. In the area of ​​La Rioja, with a large area of ​​lakes that would have rises and falls in the water level, it would allow the animals to walk on muddy sediments in times of low water level that, when the water rose again, they would be buried by new sediments allowing their conservation. Creative reconstruction of a carnivorous dinosaur running in sediment in a lake. Source: Pablo Navarro Lorbés

How did it feel to see that your work was recognized by one of the most important scientific journals in the world?

It was a surprise. We thought we had an interesting job on our hands and decided to send it to the journal Scientific Reports of the Nature group. The first surprise we had is that the reviews they did to us, let’s say they were very soft. Once the article was definitively accepted, what surprised us is that the magazine itself found it to be a very interesting article and she herself distributed it to the press. It has spread much more than we expected and, the truth is that it is an important satisfaction that it reaches all the media worldwide.

A couple of months ago, researchers in China found a series of chromatin-like structures, or strands of DNA, and proteins in the fossil remains of a 125-million-year-old dinosaur. Do you think it is possible for reality to surpass fiction and we will see a Jurassic Park in a while?

At the moment I think it is complicated because these DNA remains that have been found are so fragmentary that from there to encode the entire genetic code of these animals will be complicated. But hey, if the world of paleontology is teaching us something, it is that it surprises us with new discoveries that we thought were impossible.

If there is something that all paleontologists would like to see, it is to see these animals in life. They are the animals that are the object of our study, so we will wait to see what happens.

Finally, do you think there will be more such finds in the not too distant future? Perhaps new species of dinosaur or will we know more about some already known?

One of the things that we find most interesting about the footprints is that, although we cannot identify specific species of dinosaurs, what they allow us to study is part of their behavior. Traces are still “fossilized” behavior, and behavior is one of the most difficult things to study about these animals from the bones alone. They teach us a lot about their biology and anatomy, but little about their behavior. The footprints help fill in this information. In the future we hope to continue providing new data on how dinosaurs lived and how they behaved.

In death of dinosaurs, it was all about the asteroid – not volcanoes

Nuclear preservation in the cartilage of the Jehol dinosaur Caudipteryx