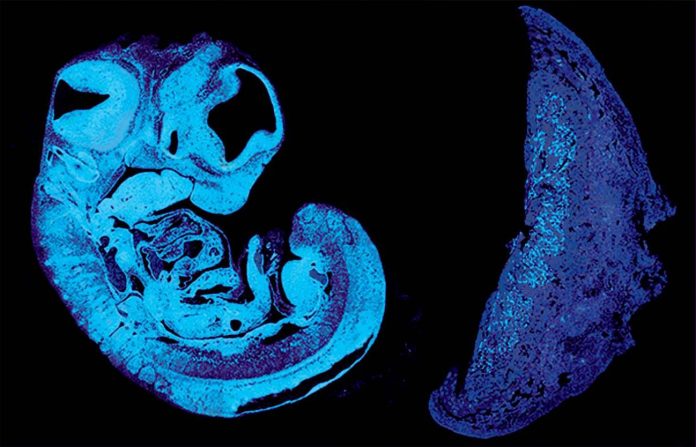 The fetus receives nourishment through the blood vessels of the placenta , a specialized organ that contains cells from both the baby and the mother. As it grows, its nutritional demand is greater.

Between 10 and 15% of babies have low growth in the womb, often due to less development of the placental vasculature. In humans, these blood vessels expand dramatically between mid and late gestation , when they reach a total length of approximately 200 miles.

Babies who are too big or too small are more likely to suffer or even die at birth, and have a higher risk of developing diabetes and heart problems in adulthood

In a study published today in  Developmental Cell , a team led by scientists at the  University of Cambridge  (UK) used genetically modified mice to show how the fetus produces a signal that encourages the  growth of blood vessels  within the placenta. This signal also causes modifications in other placental cells to allow more  nutrients  from the mother to reach the baby.

“As it grows, the fetus needs its mother’s nourishment; and healthy blood vessels in the placenta are essential to obtain the adequate amount of nutrients it needs ”, explains Ionel Sandovici , first author of the work.

“We have identified one of the ways that the fetus uses to communicate with the placenta and cause the correct expansion of these blood vessels. When this communication is interrupted, the blood vessels do not develop properly and the baby will have difficulties to obtain all the food he needs ”, adds the researcher.

The scientific team discovered that the fetus sends a signal known as IGF2 – a peptide hormone that is involved in the regulation of proliferation, growth, migration, differentiation and survival of cells – that reaches the placenta through the cord umbilical .

In humans, IGF2 levels progressively increase after 29 weeks of gestation: a large contribution is associated with excessive growth and an insufficient amount with poor growth

Babies who are too big or too small are more likely to suffer or even die at birth, and are at higher risk of developing diabetes and heart problems in adulthood.

“We have known for a long time that IGF2 favors the growth of the organs where it is produced. In this study, we have shown that IGF2 acts like a classic hormone: it is produced by the fetus, passes into the fetal blood and, through the umbilical cord, to the placenta, where it acts ”, adds the scientist.

Battle of the sexes in the genome

In mice, the response to IGF2 in the blood vessels of the placenta is mediated by another protein, called IGF2R . The two genes that produce IGF2 and IGF2R are imprinted genes , that is, they are expressed in a specific way according to the sex of the parent. In this case, only the copy of the IGF2 gene inherited from the father and that of IGF2R inherited from the mother are active.

The father’s gene stimulates the fetus’s needs for larger blood vessels and more nutrients, while the mother’s gene in the placenta tries to control the amount of food it provides.Miguel Constância, co-author of the study

“The gene from the father stimulates the fetus’s needs for larger blood vessels and more nutrients, while the gene from the mother in the placenta tries to control the amount of food it provides. There is a tug of war, a battle of the sexes on a genome scale ”, emphasizes the expert.

The team says their findings will provide a better understanding of how the baby, the placenta and the mother communicate with each other during pregnancy . This, in turn, could lead to ways to measure fetal IGF2 levels and find ways to use medications to normalize those levels or promote normal development of the placental vasculature.

Share
Facebook
Twitter
Pinterest
WhatsApp
Previous articleA laboratory in the garden: this is how the wild animals of the city interact while there are no humans
Next articleThey visualize the repair of genetic material as never seen before
RELATED ARTICLES
Life Sciences