THIS PTEROSAUR IS THE LARGEST FLYING ANIMAL IN HISTORY 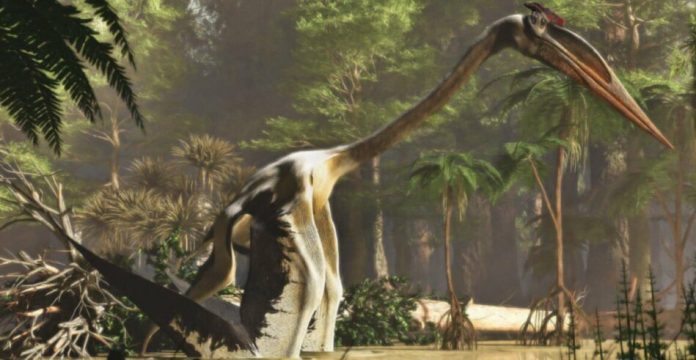 The Quetzalcoatlus northropi was the largest flying animal in history, it flew and hunted like a giant heron, rushing from the air to hunt prey in the water

Everyone knows about peterosaurs, the flying dinosaurs that appear so much in movies of the genre, but we know relatively little about these fascinating animals. Now a series of memoir articles have been published in the Journal of Vertebrate Paleontology that tell us a bit more about the largest of them all.

The Quetzalcoatlus northropi was a pterosaur that lived in the wetlands of what is now Texas, United States, more than 67 million years ago. With its 11-meter-long wings it had the wingspan of a small plane, and to fly it needed to jump up to 2.5 meters in the air, and then to perform powerful flaps to soar into the sky.

The genus name of these pterosaurs comes from the Aztec deity Quetzalcóatl, the feathered serpent. Scientists have also described for the first time a smaller relative, Quetzalcoatlus lawsoni , which would have had a shorter wingspan, about 4.5 meters, the length of a car. These pterosaurs fed on fish and small aquatic prey.

Professor Brian Padian, co-editor of a series of recently published articles on these animals, says: “These ancient flying reptiles are legendary, although much of the public conception of the animal is artistic, not scientific.”

The largest pterosaur in history, Quetzalcoatlus northropi , was christened in 1975 after the discovery of hundreds of bones in Big Bend National Park. The species was described from the large bones of the left wing, but many smaller bones were also found in other areas of the park in different layers of rock.

When these fossils were discovered, it was not known for sure if the smaller bones were simply young specimens, or if they were of a different related species. In the end, the scientists decided that it was probably a new species of Quetzalcoatlus , but did not perform further analysis to find an exact species.

Decades later, scientists have finally analyzed these smaller bones and found that they differ in a number of ways from the larger Q. northropi . Among them, changes in the structure of its skull and spine, suggesting that two other species of pterosaur coexisted with the giant.

Most of the finds correspond to Quetzalcoatlus lawsoni , named after Douglas Lawson, who discovered the remains for the first time. From the same time, the researchers also found some bones of a third pterosaur species called Wellnhopterus brevirostris , which had a wingspan of three meters.

By classifying the different bones by species and investigating their unique characteristics, the researchers were also able to find out how the different Quetzalcoatlus species would have behaved.

First, the researchers analyzed the toothpick-shaped beak and found that it was probably too delicate to eat meat or rummage through carcasses. Instead, they suggest that the animals likely acted like a great heron, catching fish, invertebrates, small amphibians, and reptiles from the water and gobbling them up whole.

Unlike some previous studies that suggested that the Quetzalcoatlus would be unable to fly, the researchers found that the species would have been very capable through the use of a jump. Scientists argue that the size of its wings would have prevented it from using a running starter, as they would have crashed to the ground.

Once airborne, Quetzalcoatlus would have soared like modern condors and vultures, and it is suggested that his large head may have helped him complete the turns. At the time of landing it would have acted like an airplane, braking until it is about to fall from the sky before hitting the ground.