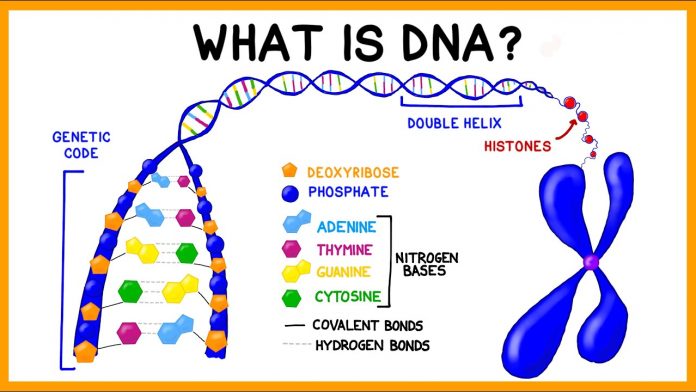 We have all heard of DNA, but what exactly is DNA and Why is DNA called the blueprint of life ?

DNA is short for Deoxyribonucleic Acid  , a  complex molecule found inside every cell in our bodies that contains all the instructions needed to create and maintain life.

What is DNA?: Characteristics

DNA is not scattered throughout our cells, it is carefully packaged into structures called chromosomes. Did you know that, otherwise, the DNA of a single cell would be more than 2 meters long? DNA is mainly made up of four chemical substances: adenine, thymine, guanine and cytosine, which are linked in a very specific way: A with T, C with G.

To understand what DNA is, we must imagine two chains that come together to form a double helix or a spiral staircase; it was first described in 1953 by James Watson and Francis Crick, which was a milestone in the history of biology. Many, thousands, millions of adenines, thymines, guanines and cytosines join together to form a sequence that follows a certain order such as AAATTCGAGTCAATTGCCTATCCTCGAGTCAACCTATCCA. The entire sequence of these chemicals makes up our genetic code, our genome, and certain sequences of these “letters” give rise to “sentences” known as “genes.”

In this video we also explain it to you:

Once we have clarified what DNA is, we proceed to explain what functions it has in the organism. Thanks to police movies or series like CSI, we know that DNA is something important, that it identifies us, that differentiates us from the rest, but in order to understand its function, we must immerse ourselves in a microscopic world.

We can say that DNA is the genetic map of life. Our body is made up of different systems: respiratory, circulatory, neurological, digestive, among others. They all carry out different functions that act in an organized way to keep us alive. In turn, these systems are formed by organs and these by different types of cells. The heart cell does not perform the same functions as the liver cell. And, if our body is the product of the union of only two cells: the sperm from the father and the egg from the mother, how is it possible that we have so many different types of cells that carry out different functions? The answer lies in the DNA again;

As we said, DNA contains sequences known as genes that are the necessary instructions to form proteins. Proteins are molecules that participate in practically all biological processes, and together with the environment that surrounds us, they determine everything about us, from the color of our eyes or our height, to our susceptibility to diseases.

But the DNA does not stop there! DNA contains the genetic information that we have inherited from our parents and that we will pass on to our children. Have you ever noticed if your parents have their earlobes glued together or if they can roll their tongues into a “U” shape? These characteristics are also written in your genes and it is no coincidence that you share these traits with one of your parents. Also, as amazing as it may seem to us, all humans are 99.9% genetically the same; and that 0.1% that makes us different is what allows us to identify ourselves, that is, to have our genetic ID.

Now that you know the importance of DNA and therefore of the genome, can you imagine having a study that allows you to “read” the genetic map of your body and thus be able to understand what makes you you, that is, what defines you? genetically?