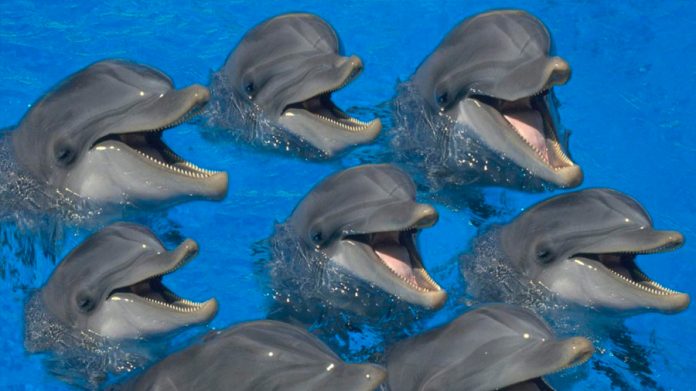 This name is not exclusive to dolphins, whales and groups of porpoises are also called pods. These cetaceans are marine mammals and are not fish, so these groups do not usually get the school name.

Although many older studies and articles will call a pod of dolphins a school, this term is now out of date for cetaceans and is used less and less.

Dolphins are very social animals and the interactions in these groups are very diverse. How do these social groups work and what are the compositions of these pods? Find out in this article!

A pod of dolphins usually contains 10 to 30 dolphins. However, this number varies from species to species and is not a gold standard. Dolphin pods are fluid and the number of individuals in a pod can change through the years. Some pods can even contain a hundred to several hundred dolphins.

Different types of groups are formed, like a nursery capsule. This is a pod that exists mainly from the females with their young. These baby dolphins are called calves and will be cared for by the entire nursery pod. Baby dolphins form very strong bonds with their mothers and are almost inseparable. If they are male and reach maturity, they can separate from the herd to find another group of females or even join other males.

Single men’s groups are not uncommon. They usually consist of one to three males, but can grow larger.

A pack of these mature males may begin to break up as the males age, although some males form such a strong bond that the pack of males is only separated when one of them dies.

The most common pods of dolphins continue to be aggregations of males, females and their calves. However, these group structures can fluctuate and the pod of dolphins may merge with other pods or split up throughout its existence. Each species of dolphin has its own way of life, resulting in a wide variety of social groups and no pod of dolphins is the same.

Different pods of dolphins can come together to form a superpod.

These superpods can grow to be so large that they consist of over 3,000 animals!

These superpods form around areas where food is abundant and the ocean is deep and open. Cetaceans enjoy great meals and new social interactions with these unknown pods of dolphins.

Dolphins stay together in pods for various reasons. Social interaction is important for these animals as they gain multiple advantages through this. Complex social bonds are formed between these beautiful animals, these bonds, however, can be compared to human bonds, but are not yet fully understood.

Feeding groups are an excellent example of a behavioral advantage. Because these dolphins form these pods, they can hunt together and have a better chance of getting a good meal. They make use of different hunting techniques such as bubble netting and hitting fish with their tails.

Pods are also formed with a cause to mate and create the next generation. Dolphins not only mate to reproduce, but also for fun just like humans and certain primates like bonobos.

A large pod has a greater advantage against predator attacks. In groups, they can defend themselves better and it is more difficult to single out an individual as an easy target. Calves have a better chance of growing due to the protection of their sheath, as they are normally an easy target. Single males are sometimes seen, making them an easier target. These males may still bond with a pod or are looking for a new pod.

Killer whales, or killer whales, have a very close family bond. They stay together for most of their lives to hunt, socialize, and even mate.

Herds in the Azores

Here in the Azores, we have some returning pods of dolphins. We can see these animals throughout the year, this means that they are resident species. The Azores have four resident species: common dolphins, bottlenose dolphins, Risso’s dolphins and sperm whales. Within our resident species, we can recognize some individuals and pods through photo-identification!

Photo ID is a good way to connect some dots. We photograph the dolphins and compare their characteristics, but more importantly, we compare the dorsal fin. These dorsal fins are like our fingerprints and are unique to each dolphin.

Most of these pods can be seen with the same individuals for several years.

These bottlenose dolphins are just one of many examples of these close social structures and there are more of these examples from different individuals in different species.

As you can see, the dolphins have very special bonds and interactions within these pods. They are very social and have evolved to work better in groups.

Remember that a group of dolphins is called a pod and these dolphins are very intelligent and form close relationships!

A fun children’s book on the subject of cetaceans and marine mammals in general: Whales & dolphins by DK publishing.

Cantor, M., & Whitehead, H. (2013). The interplay between social networks and culture: theoretically and among whales and dolphins. Philosophical Transactions of the Royal Society B: Biological Sciences ,  368 (1618), 20120340.