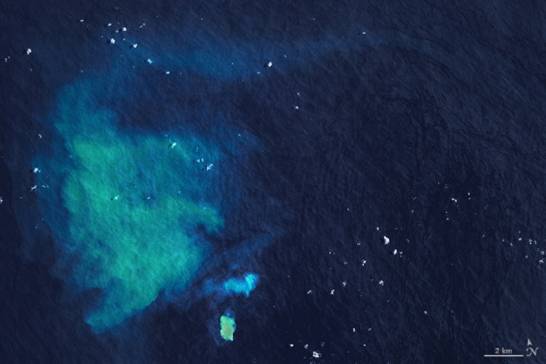 On January 15 around 04:00 (UTC) the submarine volcano Hunga-Tonga-Hunga-Ha’apai erupted causing a tsunami in the Pacific Ocean, a volcanic plume of about 30 km high and a strong explosion, whose energy has been estimated by NASA at about 10 megatons , about 500 times greater than the nuclear bomb exploded in Hiroshima during the Second World War.

The variation of the atmospheric pressure generated by this explosion has spread throughout the planet, moving as a shock wave , with a speed close to 1100 km/h

This wave has been detected by various types of sensors, such as barometers integrated in weather stations, infrasound sensors or geodetic stations.

The pressure variations as the wave passes generally range between 1 and 8 millibars.

The sudden difference in pressure produced at the arrival of this wave has caused variations in sea level in many parts of the planet, including locations on the coasts of Valencia and Balearic Islands [ 19459003], producing oscillations of 50 cm in height. Hall A of the Canfranc Underground Laboratory. / LSC / Jorge Quiñoa

The soil deformation produced by the associated pressure variation can also be detected by seismic sensors , whose main objective is the recording of seismic waves generated by earthquakes.

The data obtained by the seismic sensor, installed in the Canfranc Underground Laboratory (LSC) and managed through a collaboration agreement by the CSIC GEO3BCN institute, show an example of special interest of this type of records.

This seismic station is located about 17,000 km from the volcano, relatively close to its antipodal point , located in southern Algeria.

The seismic waves travel at speeds close to 8 km/s, and reached the Pyrenees about 20 minutes after the explosion

First of all, the seismometer records the arrival of the seismic waves produced by the eruption. These waves travel at speeds close to 8 km/s, and reached the Pyrenees about 20 minutes after the explosion.

Some 16 hours later, the arrival of the pressure wave , causing a deformation clearly detected by the seismometer.

Analyzing the data in more detail, the arrival of two acoustic signals can be identified. The first wave, after traveling the shortest path between Tonga and the Pyrenees, arrives at the seismic station around 20:00 UTC.

About four hours later, the arrival of the acoustic wave that had traveled the globe in the opposite direction, thus following a longer path, is recorded.

Although the signals can be identified in the three components of the seismic records, their identification is clearer in the component oriented North-South (HHN) , since the waves reach the Pyrenees in this direction.

The most interesting point of the data obtained in the LSC is that they allow identifying the deformation of the ground produced by the second step , some 36 hours later, of the pressure waves, which reach the Pyrenees after having circled the Earth again and traveled a total of 57,000 km, still capable of generating a clearly perceptible signal.

About 36 hours later, the pressure waves reached the Pyrenees after having circled the Earth again and traveled a total of 57,000 km

When large magnitude earthquakes occur, the generated surface waves circumambulate the planet, taking about 3.5 hours for each turn.

It is relatively common to detect two or three of these steps in seismic sensors located in areas with little ambient noise.

However, the seismic detection of ground deformation produced by the second passage of acoustic waves is an exceptional event, which highlights the great energy of the explosion.