ROSE PETAL EFFECT: UNVEILED ONE OF THE GREATEST ENIGMAS OF BIOLOGICAL SURFACES 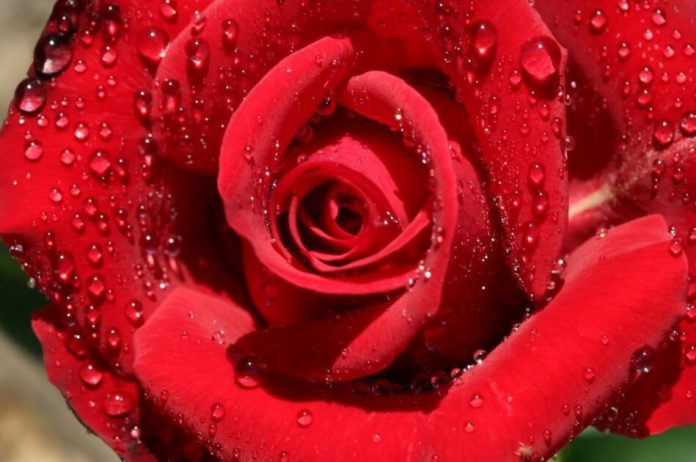 Place a drop of water on a rose petal and turn it upside down. The drop is not going to fall off. The rose petal effect has been one of the great mysteries of plant biology and, in order to explain it, they have needed an atomic force microscope

Materials science experts from around the world have been trying for decades to respond to a beautiful phenomenon of nature: the way spherical dew droplets stick to the petals of the world’s most popular flower, and do not fall off. , even if we put the flower upside down. This phenomenon is called the rose petal effect. Finding the solution to this enigma opens up a world of possibilities in biology and in the development of new materials.

THE LOTUS LEAF AND THE ROSE PETAL

There are two very unique plant surfaces, of great interest to materials science due to their relationship with water: the beam of the Lotus leaf ( Nelumbo nucifera ), a symbol of purity due to its self-cleaning properties (Lotus effect), and the beam of the petal. pink, due to the enormous adhesion of the drops (rose petal effect). Both surfaces are very hydrophobic (the water droplets on them are almost spherical), but on the Lotus leaf the droplets slip, while the rose petal sticks. An incognito of the first order that is not a matter of magic, but of science.

Usually, these phenomena have been interpreted considering only the roughness of the surfaces and their hydrophobic and uniform condition. This was the case in Lin Feng’s article published in 2008 in which he gave this phenomenon its name. However, the unsolved enigma is how the same scientific justification could explain both the repellency of the drops of water by the leaves of the Lotus, and the adherence of the drops to the rose petal. Something was wrong.

THE ENORMOUS COMPLEXITY OF PLANT SURFACES

We have spent more than two hundred years trying to understand how surfaces “wet”, both biological and synthetic . Likewise, for two centuries, research has been carried out to analyze the chemical composition and structure of the surfaces of plant organs with limited success, due to their enormous complexity .

An inherent problem in the study of plant surfaces is that their structure can be altered when the organ is removed from the plant. The petals are very delicate and their surface loses its natural shape shortly after separating from the flower.

NATURAL PETALS IN THE LABORATORY

In a novel interdisciplinary study between different Spanish research centers , we have managed to use natural petals to analyze – at the nanoscale – not only the morphology (as up to now), but also the chemical properties that determine their wetting.

In a first phase, we selected a variety of rose whose petals kept the drops of water attached in a similar way on the upper side (upper side) and lower side (lower side). We managed to characterize both sides in natural petals, subjecting them to a treatment that preserved their structure.

With the scanning electron microscope (SEM) we observe that both the texture and the roughness of both surfaces of the petal (the upper / upper face and lower / lower face) are very different. However, they are similarly wetted by drops of water. So roughness doesn’t explain everything. You had to look deeper to find the key to the rose petal effect.

Atomic force microscopy (AFM) analysis gave us the answer. AFM allows the surface of the petal to be analyzed on a very fine scale, nanometers, and essentially works by very delicately “feeling” surfaces with an extremely sharp point. In addition to sensing roughness, the AFM is able to “feel” the chemical composition. Thus we discovered that the surface of the petals at this scale has fractal roughness in the range between 5 nm and 20 µm.

We also found that at the nano scale the surface of the petal has an irregular tessellation, a pattern of figures that is repeated, and that completely covers the surface.

But there is still something more striking, and that is that this intimate tile is formed by alternating hydrophilic and hydrophobic nano-zones. And this solves the mystery of why the rose petal is hydrophobic but adherent to water at the same time. The existence of small hydrophilic areas interspersed with hydrophobic areas of greater abundance on the surface of rose petals allows water droplets (of a polar nature) to adhere, despite the fact that the surface is hydrophobic due to its great roughness and because most from the surface it is.

Oddly enough, both sides of the petal have the same fractal dimension and this explains why the water droplets interact in a similar way, despite the fact that the total roughness is about ten times greater in the beam than in the reverse.

With these new results, the difference between the Lotus effect and the rose petal effect is explained in a natural way.

Both surfaces are extremely rough, but in the rose petal the material that covers it (the cuticle) presents a tessellation in a hydrophilic / hydrophobic way, while in the Lotus leaf it is homogeneously hydrophobic, with an extra coating of nanotubes of deposited waxes. on the cuticle, which causes the drop to come off.

Intimately, on a nanometric scale, which only the microscope of atomic forces allows us to access, it is possible to appreciate this difference between these two plant surfaces and understand why the dewdrops are anchored to the rose and not to the Lotus leaf.

MATERIALS OF THE FUTURE AND BIOLOGICAL IMPLICATIONS

Following these results, future wettability studies of natural or synthetic materials should assess the possible chemical heterogeneity of the surfaces.

At the level of plant surfaces, these hydrophilic areas are of enormous interest as they can play a fundamental role in the absorption of water and solutes deposited on the leaves, such as aerosols or foliar sprays of agrochemical products, and they can also be vulnerable points for attack. of pests and diseases.

The presence, relevance and abundance of hydrophilic areas in plant surfaces is currently a Pandora’s box that we have just opened and that will foreseeably bring us many surprises.

Unveiling the secret of the rose petal, its great roughness and chemical heterogeneity, will allow materials science and biomimetics to develop new highly useful surfaces. The field is open.