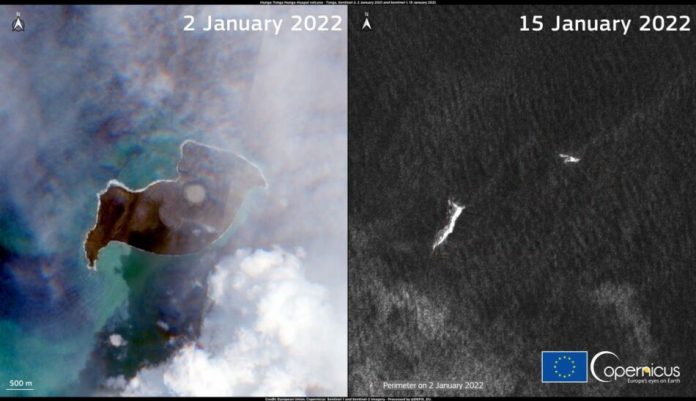 The images from the European program Copernicus, which compare the before and after of last Saturday’s eruption, show that the island of the Hunga Tonga Hunga Ha’apai submarine volcano has been badly damaged after the violent explosion: only two small portions remain above the level from sea.

In the image on the left (the last cloudless image acquired before the eruption), the volcanic island is clearly visible, while in the image on the right (acquired about 12 hours after the explosion) only two small fragments remain visible. of the island. / European Union, Copernicus Sentinel-1 and Sentinel-2 images

Satellite images captured by the European Union’s  Copernicus Earth Observation Program  show that the Tonga volcano, whose violent eruption caused a tsunami in the Pacific Ocean,  has practically disappeared  after Saturday’s explosion , one of the most powerful in three decades.

Hunga Tonga Hunga Ha’apai had a previous, smaller eruption between late 2014 and early 2015, which raised the crater above the water’s surface. Now, these photographs reveal that as a result of the recent eruption, only  two small portions  of land remain above sea level.

Before the powerful explosion, these two surviving portions – part of the submarine volcano’s cone – were much larger and joined by a tongue of land up to 1.2 kilometers wide.

Communications with Tonga remain scarce three days after the volcano’s eruption, which occurred about 65 kilometers north of the island of Tongatapu – the most inhabitable in the archipelago – and the subsequent tsunami. So far, at least two deaths have been confirmed, although the authorities believe that the number of victims will be higher.

At the moment, at least one death has been confirmed, although the authorities believe that the number of victims will be higher.

“Communications will be critical to relief efforts following Saturday’s volcanic eruption in Tonga. The Australian and New Zealand defense forces have support ships that can deliver tons of supplies. However, it will be necessary to coordinate efforts with other nations, such as China, ”says Tom Worthington, adjunct professor at the  Australian National University to the Australian  Science  Media Centre.

Australian and New Zealand planes have flown over part of Tonga, made up of 169 islands and with 105,000 inhabitants, in reconnaissance tasks to assess the damage caused by the eruption and the tsunami, which affected the coasts of countries such as Australia, Japan, Chile, among others. others.

“As far as we know, Tonga has suffered significant damage to houses and infrastructure, but there has not been a large number of casualties. The first reports suggest that the airport has not suffered significant damage, ”says Suzanne Wilkinson, a professor  at Massey University  (New Zealand) in statements to the New Zealand  Science Media Center .

RECOVERY OF THE AFFECTED AREA

As Tonga grapples with this devastating catastrophe, the priority of global communities must be to provide immediate life-saving aid. However, experts agree that it is equally important to lay the groundwork for the long-term recovery and resilience of affected communities.

The first priority is to provide immediate life-saving aid, but it is also important to lay the foundations for the long-term recovery of this area.

“After providing the basics of life – safety, emergency shelter, food, water, medical supplies and sanitation – you have to think about recovery,” adds Wilkinson.

Sandeeka Mannakkara, a professor at the  University of Auckland  (New Zealand), says the same thing: “At the same time as managing the relief efforts, the Tongan authorities must start planning extensively for the short, medium and long-term phases of recovery.”

The  violent eruption  of Hunga Tonga Hunga Ha’apai, which released steam and ash some 20 kilometers high and created a tsunami that impacted several nations bathed by the Pacific Ocean, was heard hundreds of kilometers away and could be seen clearly. from satellites in Earth orbit.