A Samsung patent raises a folding smartphone with three screens 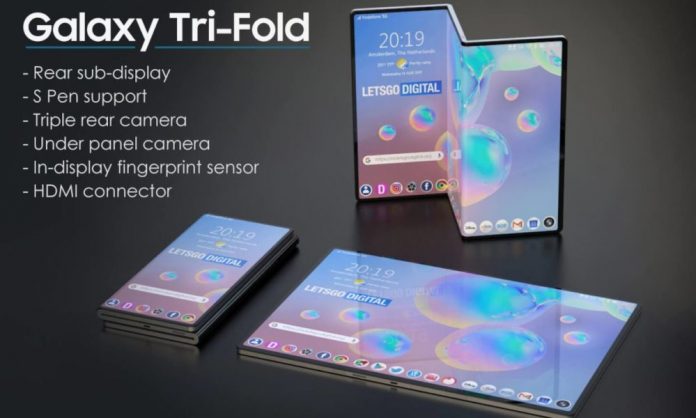 A patent granted to Samsung shows that the company is serious about creating a folding smartphone with three screens . It was the South Korean giant itself that launched this type of device with the first Galaxy Fold , which was not very well received due to its price, a questionable durability and the high price of the screen replacement , precisely the component that most shortened the durability of the device (or at least keeping it apparently without flaws or obvious damage).

The technology of folding smartphones has been polished over time, not only by the hand of Samsung, which with the Z Fold 3 and Z Flip 3 seems have made a qualitative leap, but also thanks to the addition of competitors like Huawei, which seems to have made a relatively strong bet with the P50 Pocket .

Seeing the good prospects that exist around folding smartphones for the year 2022 , in TechSpot they have echoed a patent granted by Samsung and published in LetsGoDigital which shows the design of a smartphone with three screens and which has two sets of hinges , so it is bent at two points, as can be seen in the following image .

The outer screen features a fingerprint sensor, while the rear incorporates a triple camera setup and would support essential internal components such as batteries. The device would also have a USB Type-C connector and an HDMI port .

Although the patent has now been released, it is known that Samsung has intentions to launch a foldable device with three screens for a long time. In fact, Samsung Display, a YouTube channel, showed in August 2021 a device whose screen could be folded into an S shape that could not be related to the patent that we are dealing with in this post.

Few doubt that folding smartphones will be polished in the future and we will probably find ourselves with some other peculiar proposal. However, the optimism around folding smartphones is linked to a possible price drop for 2022 , but it is also true that many said that Xbox Series X had aroused more interest than PlayStation 5 and later It was found that Sony’s console started out selling much more than Microsoft’s . That folding smartphones are interesting from a technological point of view does not mean that consumers see them as useful or interesting.