We’re still reviewing the hottest news from CES 2022, and now it’s ASUS ‘turn. The Taiwanese giant has announced a large number of new features in its notebook catalog ROG series , and also in its TUF range . The latter is characterized, as many of our readers will know, by prioritizing the price-performance value, and this makes it a good option for those who want to enjoy a high level of performance, a neat design and a good quality of construction without having to make a large investment. 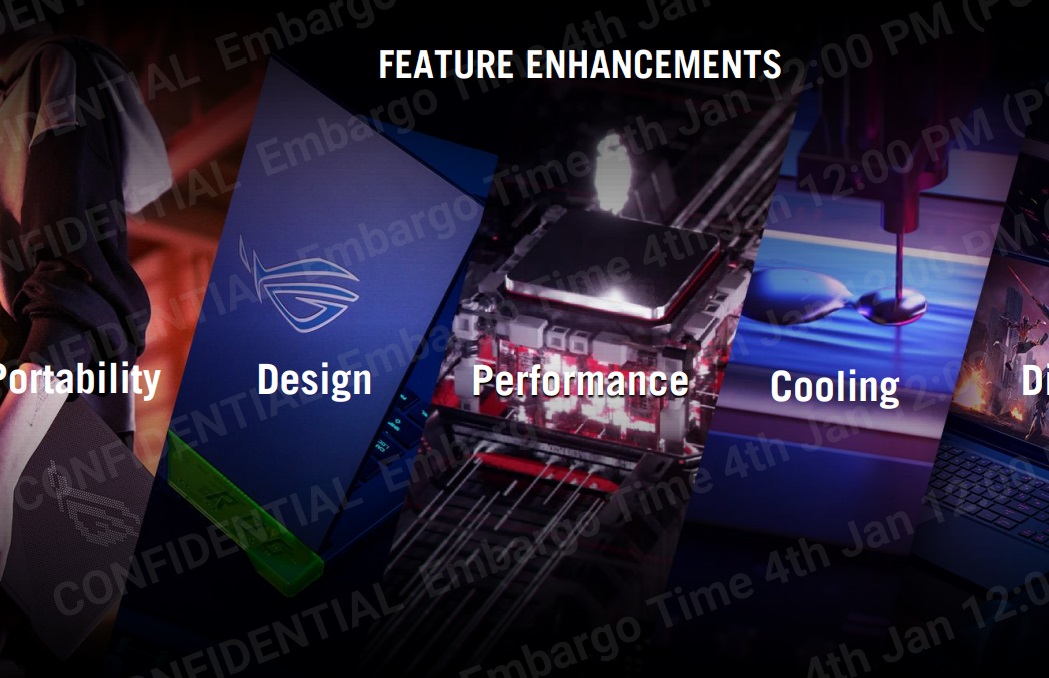 Before entering the subject, we are going to review the distribution of ranges, and levels, that ASUS currently has within its portfolio of notebooks and mobile devices for gaming. As we can see in the attached image, the base is made up of the ASUS TUF Gaming series. One notch above we have the ROG Strix line, followed by the ROG Zephyrus series. At a higher level is the ROG Flow line, consisting of convertibles and two-in-one devices, and at the top we have the ROG Zephyrus DUO series.

With this latest equipment renovation that ASUS has carried out, the company has opted to introduce important improvements on five major fronts: mobility, design, performance, cooling and display . As it could not be otherwise, all the new equipment that ASUS has presented use the latest generation processors Intel Core Gen12 or AMD Ryzen 6000, and GeForce RTX 30 Mobile or RX 6000M series graphics cards to guarantee a good gaming experience, even with active ray tracing. 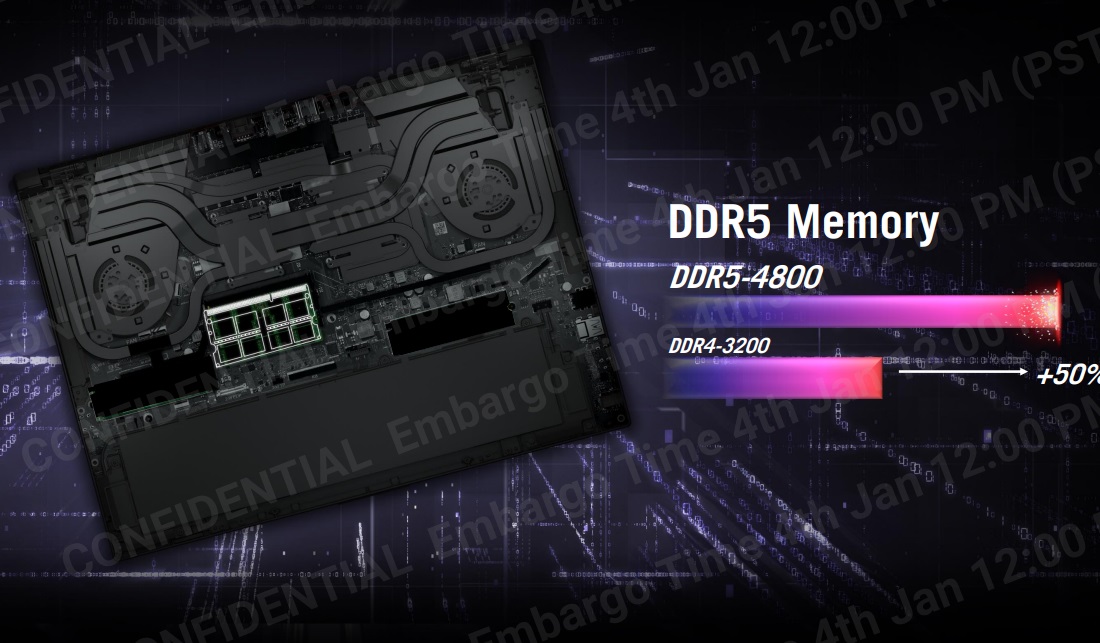 The performance improvement has been given by the use of new components, as we have seen in the previous paragraph, but this point is not limited to CPUs and graphic cards. ASUS has also made the leap to DDR5 memory , and has opted for kits that work at a frequency of up to 4,800 MHz, which represents a significant jump compared to the 3,200 MHz of the DDR4 kits that mount current teams. When it comes to cooling, ASUS has once again turned to liquid metal to reduce the CPU temperature by up to 15 degrees. But liquid metal is not the only key. ASUS has also introduced notable improvements in the cooling system of its new notebooks, among which we can highlight: 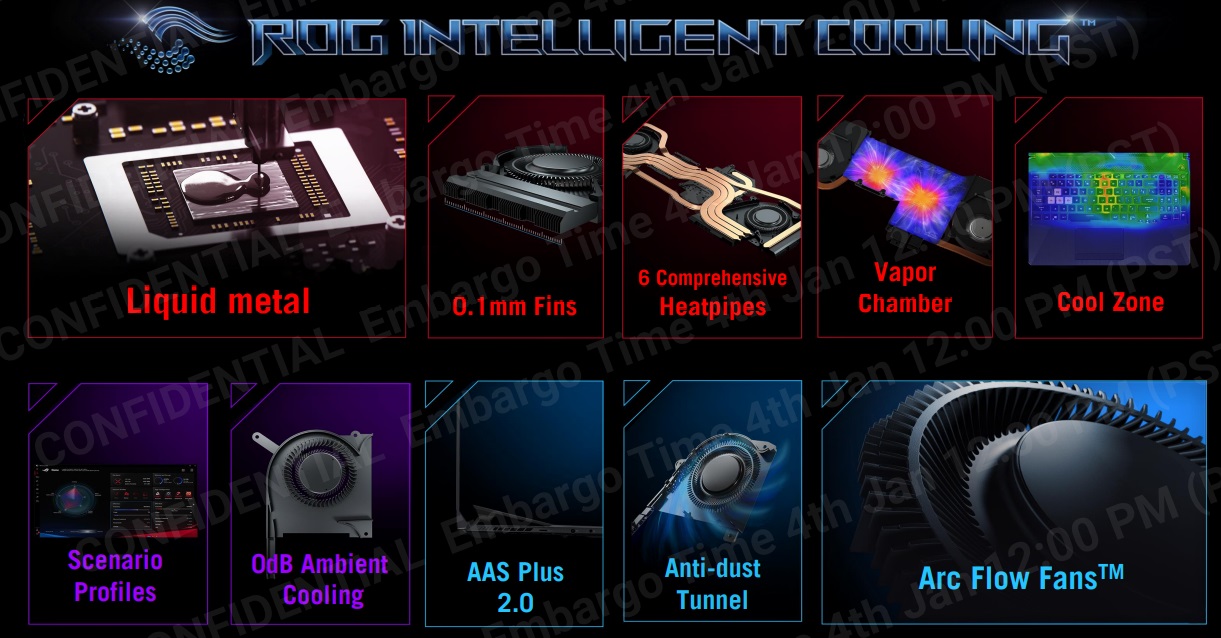 The rest of the specifications of these new teams do not clash at all. ASUS has integrated drives SSD PCIE Gen4 with speeds up to 7 Gbps, Wi-Fi 6E connectivity to ensure high speed and lower latency. The screen quality has also improved, thanks to the introduction of the ROG Nebula Display and ROG Nebula HDR panels, whose keys can be seen in the attached image. 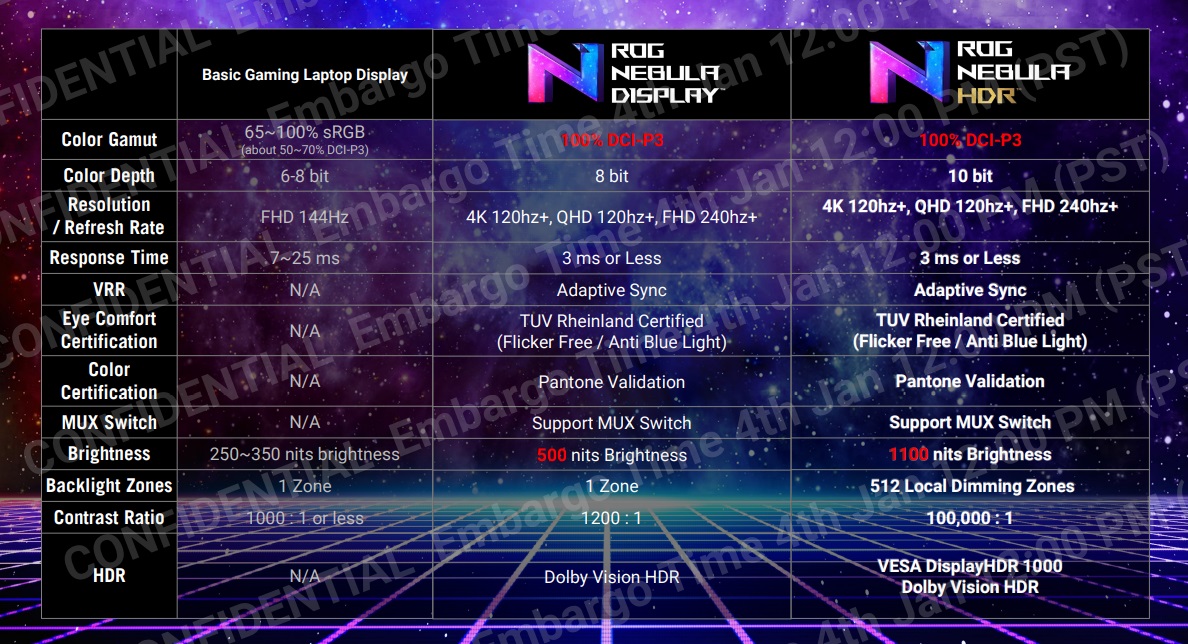 In terms of design, and mobility, I think ASUS has once again demonstrated that it has a talent for creating gaming laptops . I have really liked all the models that I have seen, and I think that the small changes that the company has introduced in its most popular ranges have been very successful.

We began to review the news from ASUS at the base of that pyramid that we have seen. The TUF Gaming line is, as we anticipate, one of the most interesting of the Taiwanese company because it focuses on offering a good price-performance value , but without sacrificing good design, high mobility and good build quality. I can attest to this as, as our regular readers will recall, I recently had the opportunity to review the ASUS TUF Dash F15 . 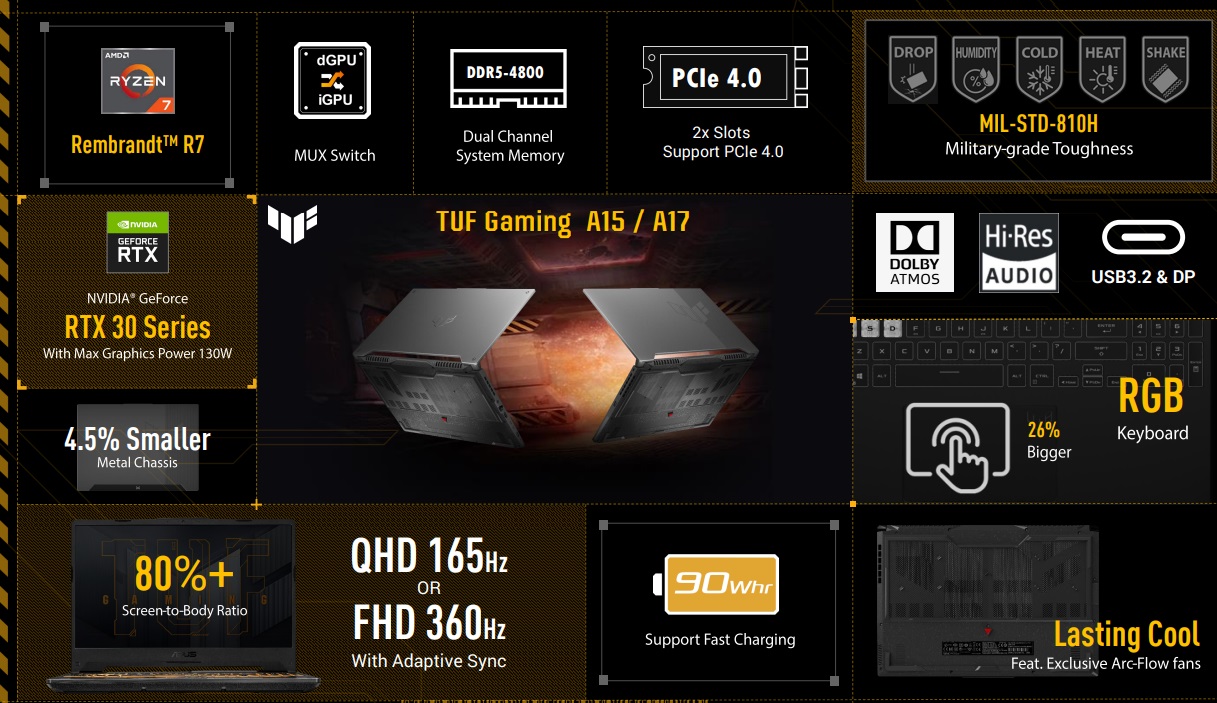 The new generation of ASUS TUF Gaming notebooks is divided into different subcategories and ranges. They all have a series of key values ​​in common, among which we can highlight displays with high refresh rates, state-of-the-art and high-performance components, MIL-STD-810H military grade resistance certification , a metal chassis and a top-notch cooling system to keep your working temperatures under control. 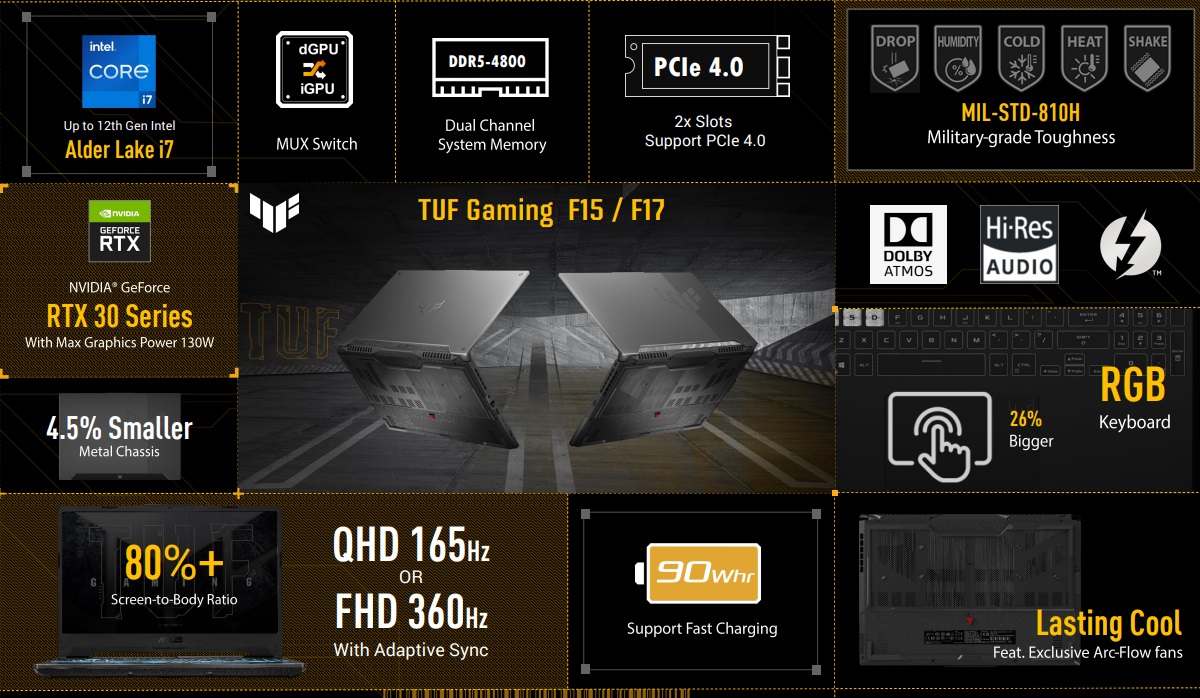 ASUS TUF Gaming can be configured with Intel Core i7-12700H processors and Ryzen 7 6800H APUs, will use DDR5 memory at 4,800 MHz and will come equipped with GeForce RTX 30 Mobile graphics cards, whose TGP can reach at a maximum of 140 watts. This detail is very important, since it implies that they will be able to develop their full potential, and will not have to suffer performance limitations derived from a low TGP. 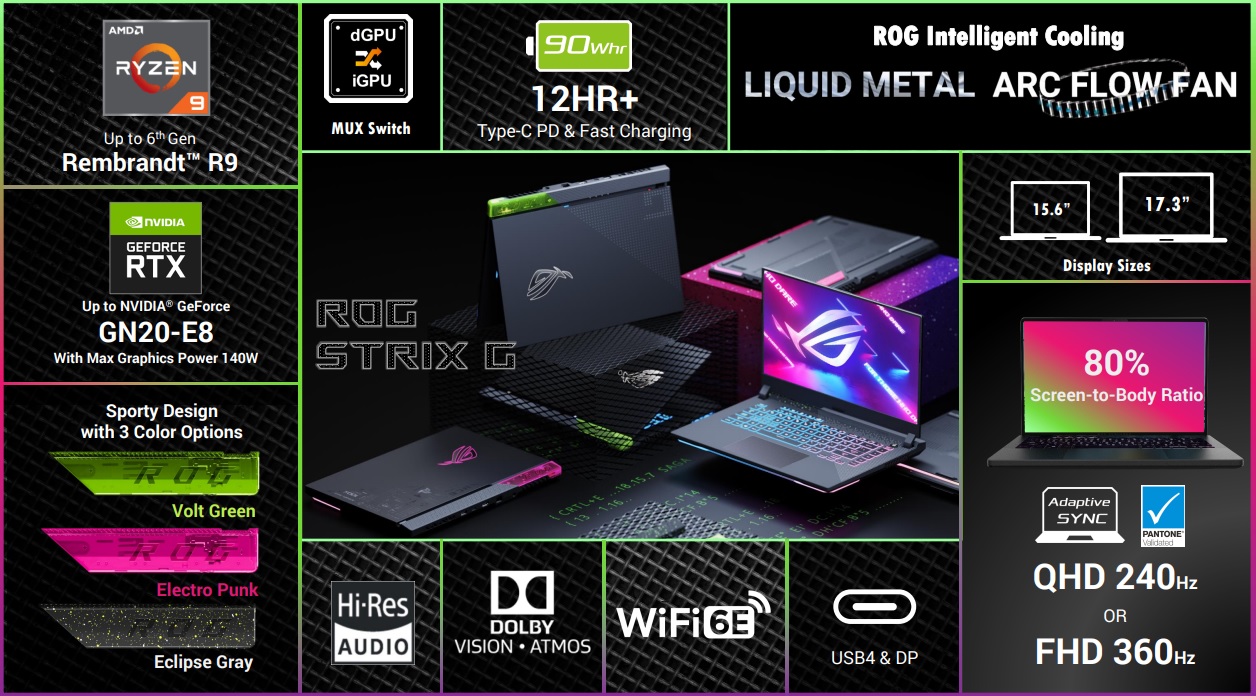 We went up a step and now we are going to talk about the new ASUS ROG STRIX G15 and G17 , two laptops that maintain the characteristic design that has always defined this range, which means that they present the ROG logo in the back and that present a very attractive dual design, which combines a minimalist touch with totally differentiated and much more striking sections. This generates a contrast that, as we can see in the images, gives them a truly unique touch.

As expected, ASUS has taken great care of all the details of the ROG STRIX G15 and G17, something that is noticeable in its build quality (metal chassis) and its cooling system, which relies on liquid metal to reduce working temperatures, and even on the keyboard, which includes a RGB LED lighting system compatible with ASUS Aura Sync. 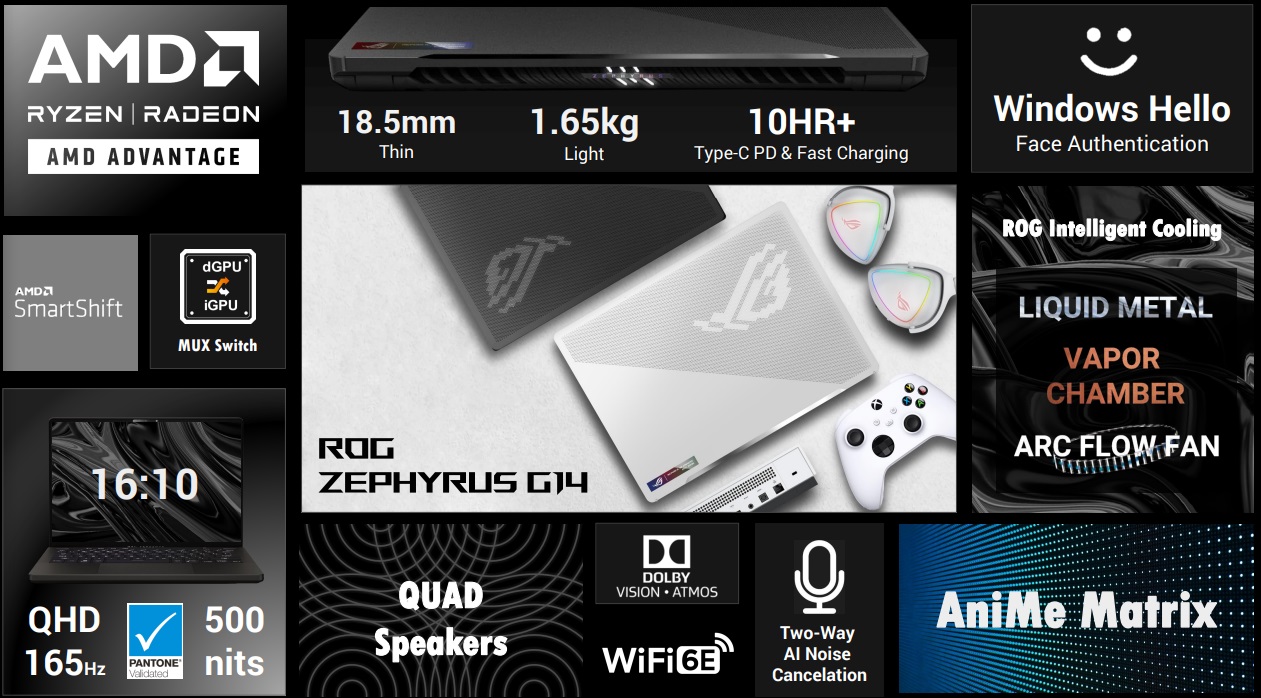 The ASUS ROG Zephyrus G14 is a laptop that is designed for those who want to enjoy the best of a high-performance gaming laptop and the mobility of an ultralight. This can be seen with the naked eye, and is confirmed when we see that it has a thickness of just 18.5 mm, and a weight of only 1.65 kilograms. 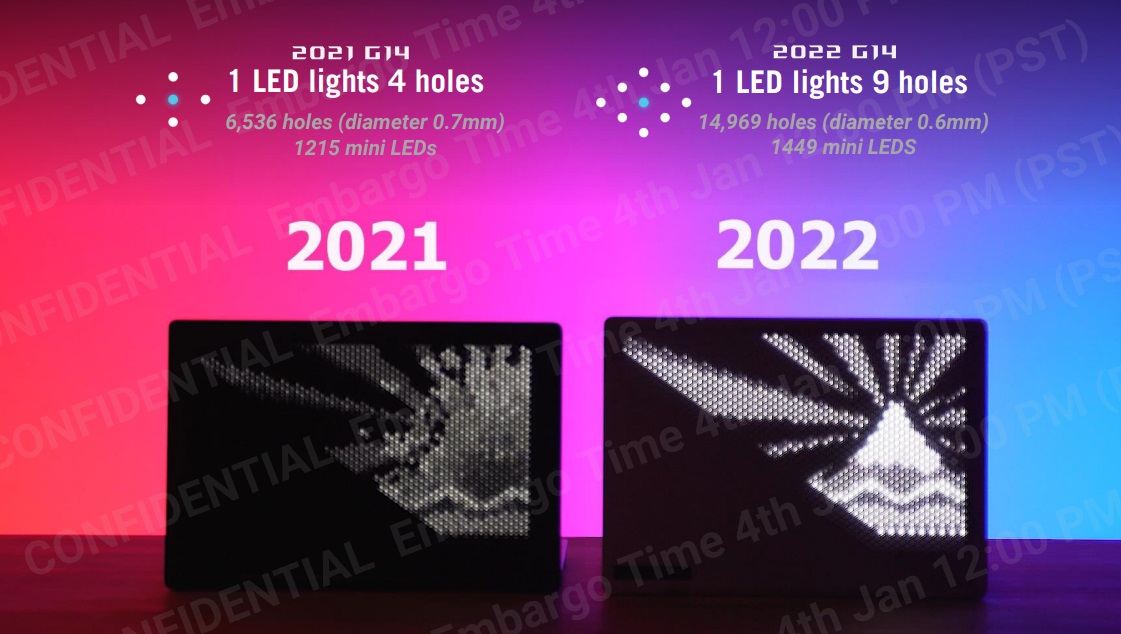 This equipment uses the 16:10 screen format, which is characterized by offering more vertical space, and has an improved LED (AniMe Matrix) lighting system at the rear. The 2021 model had 6,536 holes and 1,215 mini LEDs, while the new model has 14,969 holes and 1,449 mini LEDs . It features a ROG Nebular Display that reproduces 100% of the DCI-P3 color spectrum, mounts next-gen Ryzen APUs, and can be configured with a Radeon RX 6800S graphics card.

The ASUS ROG Zephyrus G15 is a larger version of the previous one that also adopts a clearly differentiated design, as we can see in the attached image, although it maintains a high level of performance thanks to the integration of a Ryzen 9 6000 series APU and new NVIDIA GeForce RTX 30 series graphics cards.

And this is not all. We have published other separate articles where you will find all the information about the new ASUS ROG Flow , and also the ASUS ROG STRIX Scar and ROG Zephyrus Duo 16 . If you want to know everything about ASUS at CES 2022 you can’t miss it.

Share
Facebook
Twitter
Pinterest
WhatsApp
Previous articleCorsair One i300, a compact but extremely powerful PC
Next articleHonor Magic V, the first folding of the company is seen and confirms its launch date
RELATED ARTICLES
News