The semiconductor crisis and the high prices of DDR5 memory aim to slow down the adoption of this type of RAM, at least in the short term. Looking at the situation, ASUS has shown presumably a DRR5 to DDR4 converter that allows to use DDR4 memory on motherboards prepared for DDR5 modules.

Although the existence of Intel Alder Lake and AMD Rembrandt (Ryzen 6000) is linked to DDR5, the current situation of this type of RAM memory will make For at least part of the year 2022, DDR4 modules continue to be the most in demand (and in many cases, reused). This alleged ASUS converter would allow users to be able to buy a motherboard for DDR5 modules and continue to use the DRR4 that they have at their disposal, thus avoiding the purchase of a motherboard to just change the modules of RAM. 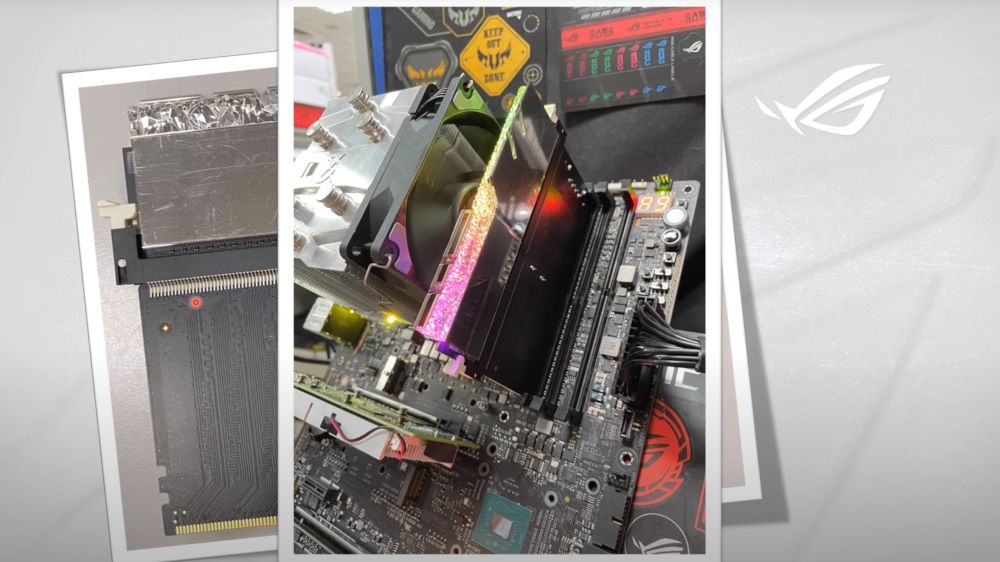 The existence of the device has yet to be confirmed, as it was made known through a video posted on YouTube by a channel called 林 大餅 Bing , which has been taken for granted that it belongs to an employee of ASUS ROG (Republic Of Gamers). Although Intel has opened the door to using DDR4 and DDR5 memory on motherboards for Alder Lake processors, there was no way to use both formats simultaneously at least until now.

The use of the converter by the user is not a mystery since it is placed on a DDR5 slot while supporting a DDR4 module. However, internally there is more crumb, since DDR4 memory has a single 64-bit memory channel, while DDR5 has a dual 32-bit channel per module . This results in the fact that DDR5 manages power per module and DDR4 relies on motherboard power management. This causes the use of the converter to stretch memory traces, which could degrade the quality of the signal.

According to what has been learned from the alleged internal ASUS tests, the company would have used a revision of the BIOS for the ROG Apex DDR5 board in order to run DDR4 memory through the converter, making the DDR5 slots work as if they were DDR4 . The rest is up to the converter, which takes the 5-volt power signal and runs it through the equivalent of motherboard power management, as well as monitoring the data lines to maintain signal integrity. , latency, energy, etc.

Of course, those who have hopes in this device better contain the euphoria, because for now it seems that it is a very early stage prototype. The person in charge of the aforementioned YouTube channel has commented that it still has room for improvement to make it lower, and that without counting the many tests that it will have to pass before being commercialized.