How long does it take for a black hole to form? 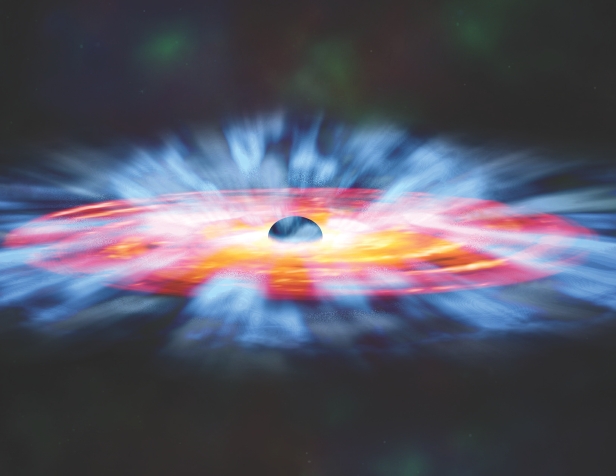 It is very easy to get overwhelmed by the time scales used in geology; as an example, this news about Lake Paratetis, larger than the Mediterranean Sea, which dried up almost 8 million years ago. In biology, the time scales in which species evolve do not seem very manageable either, and for this reason, in part, evolution is a process that easily lends itself to confusion , such as that which has circulated in the last weeks , even when there are bacteria that mutate and evolve in very short time scales . What are we going to say then about the time scales used in astrophysics! How can we understand and appreciate that we know what happened 370,000 years after the Big Bang when the universe is now almost 14,000 million years old or that we know that the age of the solar system is 4,500 million years?

There are, however, certain phenomena in the universe, the most extreme and complicated to understand, that occur very very fast. Today we focus on a specific and fascinating example: How long does it take for a black hole to form? There are no simple questions, much less simple answers, so here are some ideas on this topic.

Most of the known black holes have a stellar origin . They are the leftovers left when a massive star dies. That of massive means stars that are at least 10 times bigger, in mass, than the Sun. Those stars are rare, but they exist: an example is Rigel , which has a mass about 20 times bigger than the Sun, and it is the brightest star in the constellation Orion (although its name is also Beta Orionis, which “ would imply ” that it is the second brightest!), Now visible at the end of July shortly before from dawn, towards the East (better to wait for winter to observe Orion well). Rigel is on one knee or foot of Orion, it all depends on how you imagine a hunter with a bow, but the Arabs, where the name comes from, is what they saw when they called it “the foot of the giant”. At the other end of Orion, on the shoulder, is Betelgeuse (which supposedly would also come from the Arabic and would mean “on the giant’s arm”), a red giant whose color difference with Rigel is spectacular and visible to the naked eye. Well, a star like Rigel, which is not one of the most massive known, lives “only” for about 15 million years. It has been around for about 8 million years now, so in a time similar to what has happened since Lake Paratetis dried up, Rigel can explode as a supernova and leave us a black hole.

The black hole that Rigel will probably leave for posterity (the evaporation of black holes is another matter, but we already anticipated that it is better to wait seated until a stellar black hole disappears) will be a few times more massive than the Sun. Rigel will give rise to something similar to the smallest known black hole, a title that is disputed by the one known as Unicorn and the less poetic 2MASS J05215658 + 4359220 , both of about 3 solar masses in a region with a diameter slightly larger than Madrid.

Most of the known black holes have a stellar origin. They are the leftovers that remain when a massive star dies

At the other extreme, we know black holes of stellar origin of up to 15 solar masses. Its origin is probably stars of the order of 100 times more massive than the Sun, as is the case of eta-Carinae . Such a massive star lives on the order of 3 million years … and eta-Carinae is about 3 million years old, so at any time (which means in any future millennium), it will leave us a nice hole black.

So stellar black holes can form in a few million years, which has been slow to evolve since Homo habilis . But today, thanks to gravitational waves , we know black holes of up to 62 solar masses. Where do such monsters come from? That one in particular is the result of the merger of two black holes of about 30 and 35 solar masses. The parents of the creature may have a stellar origin, but they are becoming too big for the stars we are used to seeing. Perhaps they come from the first stars, which were formed when there was nothing in the universe other than hydrogen and helium. Those early stars, we think, must have had masses several hundred times that of the Sun, even a thousand times larger, and must have undergone extremely rapid evolution. We do not know any stars of this type, they are known as stars of Population III , while our Sun is Population I and the stars that surely gave the Sun and Earth almost all their heavy elements (more than helium, we mean) are Population II. The Population III stars must have lived quickly as if there were no tomorrow, disappearing in 1 or 2 million years, and it is not clear whether they left black holes or were destroyed even more violently than a supernova and launched all their material into the interstellar medium.

Is that the record for our question about how long it takes for a black hole to form: 1-2 million years? Well maybe not. We don’t know of any either, but we think that what is known as primordial black holes may exist. These black holes could have formed a few seconds after the Big Bang and today fill the universe and remain virtually undetectable to our telescopes. They could be as small as a tennis ball, where they would concentrate the mass of a few lands. That means they could be much smaller than the black holes “we’re used to.” But not very small either, because primordial black holes of less than a trillion kilograms (100 times smaller than Halley’s Comet) could have evaporated in the time since the Big Bang.

As you can see, there are black holes of all colors, although we should not say that because, according to what is known as the “no hair” or “no hair” theorem, black holes only have 3 properties, and none of them is the hair color, hence the name of the theorem (physicists like funny things, it’s not just a matter of this blog). But what is clear is that there are beasts of a very different type out there, in what it took to blink the universe was able to create thousands of black holes in what is now the Milky Way, and at some point all that will remain of the stars will be black holes and black dwarfs .

Pablo G. Pérez González is a researcher at the Astrobiology Center, dependent on the Higher Council for Scientific Research and the National Institute of Aerospace Technology (CAB / CSIC-INTA)

Cosmic Void is a section that presents our knowledge about the universe of a qualitative and quantitative way. It is intended to explain the importance of understanding the cosmos not only from a scientific point of view but also from a philosophical, social and economic point of view. The name “cosmic vacuum” refers to the fact that the universe is and is, for the most part, empty, with less than 1 atom per cubic meter, despite the fact that in our environment, paradoxically, there are quintillion atoms per meter cubic, which invites us to reflect on our existence and the presence of life in the universe. The section is made up of Pablo G. Pérez González , researcher at the Center for Astrobiology; Patricia Sánchez Blázquez , professor at the Complutense University of Madrid (UCM); and Eva Villaver , researcher at the Center for Astrobiology