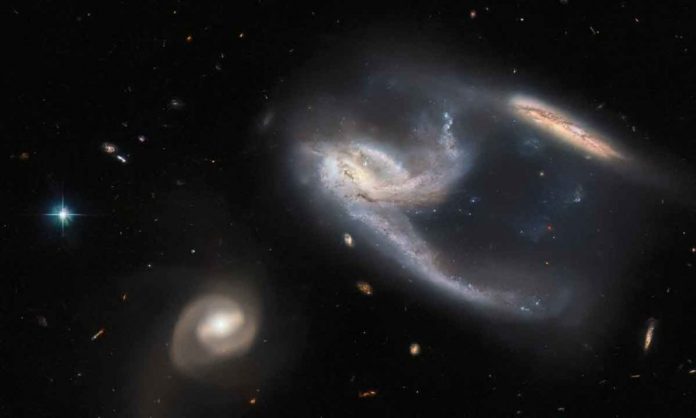 Long after its initially planned retirement date, the Hubble space telescope is not only still in service, despite some ailments due to its age, but also continues to show us amazing images, which help us to know more, and therefore better understand, the entire region of the Universe visible by it. And it is that thanks to their observations, the scientific community has the possibility of confirming aspects that, until then, had only been developed theoretically.

The last image that Hubble has given us shows us three galaxies, although what is really interesting is what we can see in the two that are located in the upper right. And as you can see they are very, very close to each other. So close that in reality, according to experts, they would already be interacting with each other . And in case you are wondering, there is also speculation that the third galaxy is in an initial phase of interaction with the other two.

The group of galaxies has been called NGC 7764A as a collective name , and it seems the most sensible, since the three groups seem “doomed” to end up forming a huge group made up of all the elements that make them up currently, except for those who, due to the forces that will be unleashed in the process, are expelled into outer space, on a journey that could last until the end of time.

The collision between two (or more) galaxies is an event that, as you can imagine if you don’t already know it, has a magnitude that costs a little to assimilate . For example (and very close) you may remember that in September 2020 we told you that our Milky Way and Andromeda have already come into contact , specifically the outer part of their halos. Both galaxies are expected to eventually merge, but experts estimate that this will not happen for another 5.86 billion years. In other words, we can speculate on what will happen, but we can never witness it.

Be that as it may, and although precisely this week the call to be the successor to Hubble, the James Webb, has already reached its point of observation, with this image Hubble shows us again that it is still an excellent observation tool . These days, speculation has begun about the possibility of a SpaceX mission to recover the telescope at the end of its useful life to bring it to Earth, where it would end up in a museum (probably the Smithsonian). And it is true that it would be an expensive mission without much scientific justification… but it is also true that, throughout its years of service, Hubble has earned it.