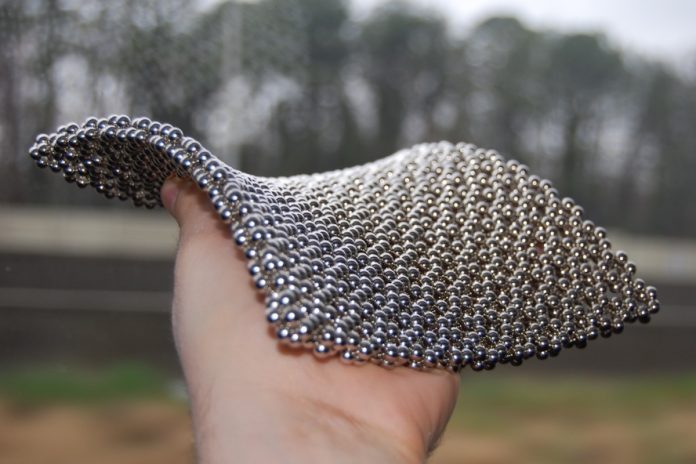 What do the portable speakers have to do with the ones that teenagers thunder on the street and the closure of your bag? Neodymium magnets. This rare earth revolutionized permanent magnets due to its magnetic power in relation to its small size, and with it it was possible to develop smaller and more powerful speakers, magnetic fasteners for clothes, or hangers that adhere to metal and support the weight of a coat.

Now neodymium magnets have competition. A research group led by Colin A. Gould, from the University of California at Berkeley, has developed a new compound with two atoms of an element that is also a rare earth element, such as dysprosium or terbium, among which are three atoms of iodine in a triangle.

Magnetism occurs in a substance due to the movement of electrons. A moving electric charge creates a magnetic field, so the electrons act like a tiny coil. The normal thing is that in the atoms there is another electron spinning in the opposite direction, which causes them to cancel each other out. But in some cases, there are unpaired electrons, which don’t cancel each other out, and they all spin in the same direction. This gives rise to permanent magnets.

In this new substance, the two metal atoms are also connected by a bond that passes right through the center of the iodine triangle. This special configuration not only generates very strong magnetism, but it is also the first direct bond between two rare earths in a molecule so far. The discovery has been published in Science .

Rare earths are elements called transition metals that are found in the central part of the periodic table. They usually contain unpaired electrons, and this makes them especially suitable for forming permanent magnets.

In theory, it is possible to achieve very powerful magnets if these rare earths are linked to metals such as iron or nickel, but until now there has been no substance with rare earths directly linked. Such a bond exists in the newly discovered molecule, but it is so weak that the two metal atoms have to be held together by three iodine atoms for it to be stable.

The power is more than three times the previous record, and twice the maximum intensity that can be measured, so there is still no exact value

The working group measured the strength of molecular magnetism using, among other things, the so-called coercive field strength, which indicates the intensity that an external magnetic field must have to overcome the internal magnetism of a substance. With two terbium atoms in the molecule and at a temperature of about 60 Kelvin (-213ºC), the coercivity exceeded 25 Tesla, according to the team.

This is not only more than three times the previous record of 7.9 Tesla for neodymium magnets, but also almost double the maximum field strength possible in common measuring devices, so the team still could not give an exact value.

These super-strong molecular magnets are very interesting for data storage based on magnetizable materials, such as hard drives, and larger magnets could also be assembled for technical applications. The teen speakers of the future promise to be much more thunderous.