The tallest towers in the world that are not skyscrapers 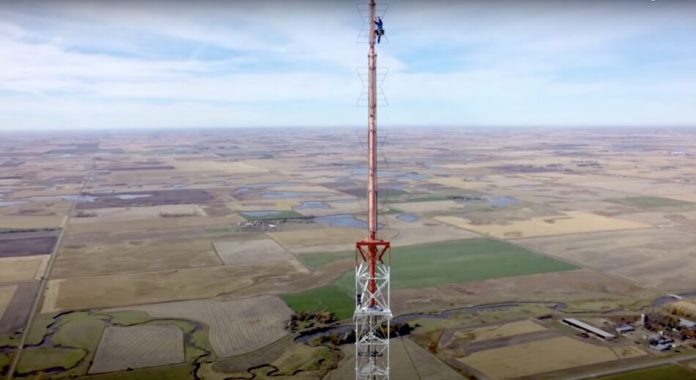 When we think of tall towers, Manhattan or Dubai with their skyscrapers come to mind, but many of the tallest structures are not buildings

Dubai’s Burj Khalifa skyscraper breaks all records. At 828 meters high, it is the tallest human-built structure in history. The second tallest tower is still under construction, with a planned opening date of 2022. The Merdeka 118 tower in Kuala Lumpur, Malaysia, will rise 679 meters into the sky.

But until the inauguration, the second tallest structure, and the third, and many of the following, are not skyscrapers, but communication antennas. They are very thin metal structures that exceed 600 meters in height.

Towers must be properly marked, as they are a potential collision hazard for aircraft. The lights at the tip need to be changed from time to time, a job reserved for people without vertigo, like this operator at the KDLT TV tower in South Dakota.

The technical name of these towers is braced or cable-stayed mast. In architecture, the braces are pieces that are placed diagonally to hold a vertical or horizontal structure. In the case of these towers, they are diagonal cables that hold the towers to the ground and turn them into a flexible structure, capable of withstanding the blows of wind, rain or earthquakes, but, as we will see, only up to a certain point.

The mast can have radio antennas mounted on top, or the entire structure itself can function as a radiating mast antenna. In the latter case, the mast must be insulated from the ground. Most of these towers were used for analog radio and television broadcasts, especially in places like the US where they had to cover enormous distances. Digitization has led to the withdrawal of many of these engineering giants.

To get to know these fascinating structures a little better, this is the list of the tallest radio towers in the world. Located in Gabin, Poland, it was the tallest tower in the world ever until the Burj Khalifa was completed, and at 646.38 meters tall it was ranked second, until the new skyscraper in Malaysia is completed. The problem is that the tower no longer exists, since it collapsed in 1991. One of the last radio towers built under the communist regime, the mast was conceived for the height and the ability to transmit the “propaganda of the successes” of the nation to remote areas like Antarctica. The site cannot be visited, but the new tower that replaces it can be seen from afar. We know North Dakota from the great movie Fargo, and the series that followed. This state is also home to the tallest structure in the country, at 627.8 meters. This position is disputed, however, by the Petronius oil platform, 640 meters high, in the Gulf of Mexico, but many people say it does not count, since only 75 meters protrude from the water level.

The KRDK-TV tower was completed in 1966, and has since collapsed and been rebuilt twice. The first collapse was in 1968, when the rotor of a Navy helicopter severed some cables. All four passengers in the helicopter were killed in the accident. The second tower fell during an ice storm in 1997, subjecting it to gusts of 110 km / h wind and causing at least ten cm of ice to accumulate on the structure, causing it to collapse due to weight. A temporary tower was built next to it, measuring 240 meters, which is now small next to the third tower, which was completed in 1998 with the same original height plus a flag, and it still stands.

The KXTV / KOVR tower rises 624.5 m above the town of Walnut Grove, California. Built in 1986, it is the tallest structure in California, the third tallest cable-stayed mast in the world, and the seventh tallest structure to ever exist including the destroyed Warsaw radio mast. Nearby are two towers of similar height, the KVIE-TV Tower and the Hearst-Argyle Tower, at 607 and 609 meters respectively, forming an impressive antenna “farm” on the east side of the Sacramento River.

The tower is also a magnet for BASE jumpers (who parachute off buildings, bridges or mountains). A BASE jumper was caught and detained in 2005 when his parachute caught on one of the tower’s guy lines and he had to be rescued by firefighters. Since then, the security of the place has been reinforced. The KATV tower was a 609.6 m high television mast built near Redfield, Arkansas, in 1967. When built it was the second tallest structure in the world, after the KVLY-TV tower in Dakota del North. It was, because in January 2008 the tower collapsed by good luck, without warning, and the cause remains unknown. There were no serious injuries, the structure broke into three pieces when it fell, which was what it was designed for in this case.

The tower was not rebuilt. In its place a new tower was built on a nearby mountain, lower in height, but offset by the higher elevation of the terrain. The KCAU-TV television station tower is a cable-stayed mast located in Sioux City, Iowa. The tower was built between 1965 and 1967 and is 609.9 meters high, making it the tallest structure in Iowa and one of the highest in the world.

KCAU-TV turned off its analog signal, through VHF channel 9, in 2009. The station’s digital television signal was relocated from its UHF channel 30 prior to the transition to VHF channel 9, therefore that the antenna is still in service.