They capture the death of a giant star ‘live’ 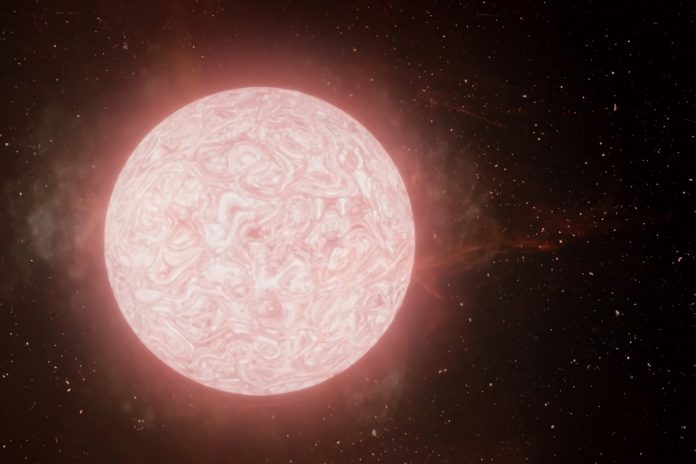 Scientists have a fairly precise idea of ​​ how stars die . However, capturing his explosive demise at just the right moment is not easy. In fact, it has never been possible to track a giant star like the red supergiant in real time. At least not until now. And it is that, for the first time, it has been possible to accurately monitor both its last moments and the explosion that led to the formation of a supernova.

The scientists responsible for such a finding are astronomers from the University of Berkeley and their results can be seen in a study published in The Astrophysical Journal.

Although the result has just been released, this monitoring actually began in September 2020, when the W.M. Keck , located on Hawaii’s Mauna Kea volcano i, obtained the first records of supernova birth. Immediately, we proceeded to analyze the data obtained by space and ground telescopes around the world. Measurements were obtained at different wavelengths and, with them, the chronicle of a death foretold could be reconstructed. That of a large red giant located 120 million light years from Earth.

Broadly speaking, a star is formed when a large mass of relatively cold gas contracts, greatly raising its temperature. Once this happens, a series of nuclear reactions begin to take place in which the nuclei of hydrogen atoms found in the star are combined with those of an isotope of hydrogen , called deuterium . Thus, helium begins to form and energy is released.

Therefore, hydrogen and deuterium are the first fuel of stars. But, like gasoline in a car, there comes a time when they run out. And the stars can’t refuel. Deuterium is spent first, so hydrogen begins to react with lithium and other light metals . Until they run out. At that point, hydrogen has no choice but to start something known as catalytic reaction of nitrogen and oxygen . Thus helium can continue to be formed from hydrogen. But hydrogen also ends up running out. And there is no more to do. All that remains is all those helium atoms that have been forming and that will now fuse with each other, while the star swells, its surface cools and it acquires a reddish hue. We have reached the stage of red giant.

Later, if there is no other way to obtain energy, it can contract to give rise to a white dwarf or directly collapse, giving rise to a neutron star, a supernova or a black hole . Depending on your size.

That is what happened to this red supergiant whose death they have captured in direct . It collapsed to directly give rise to a supernova . In fact, it was the supernova that caught the attention of scientists, but all of the above could be identified, achieving a unique milestone in history.

The supernova that was identified in Hawaii was type II , because it was richer in hydrogen than type I. When analyzing the data from several telescopes, it was found that it corresponded to a star red giant, which had been observed a few months earlier thanks to Pan-STARRS , a telescope used by the Institute for Astronomy at the University of Hawaii.

It only remained to rebuild the story. During those months this giant star had had a great increase in its brightness. This, as explained in a statement by the authors of the study, could indicate that, before collapsing, some stars of this type (and perhaps most) “suffer significant changes in their internal structure that result in the [ 19459004] tumultuous gas ejection ”. Thus, it must have swelled to a size comparable to that of the orbit of Jupiter .

All this is really novel, because until now it was believed that the red supergiant progenitors of the type II supernovae remained calm, without evidence of violent eruptions or light emission before exploding. This finding, therefore, changes everything that was thought based on theoretical data. “This is a major advance in our understanding of what massive stars do moments before they die,” said Wynn Jacobson-Galán , lead author of the research. “Direct detection of pre-supernova activity in a red supergiant star it has never been observed before in an ordinary type II supernova. For the first time, we saw a red supergiant star explode.”

How did the explosion of this giant star originate?

The mere fact of capturing in real time the explosion of this giant star and the consequent formation of a supernova is a great discovery. But, in addition, these scientists need to know why everything has been much more abrupt than previously thought .

And they already have some theories. For example, they believe that, after exhausting all the fuel in the form of hydrogen and helium, nuclear combustion reactions could have occurred that would explain this large release of gaseous material .

In fact, the models that have been carried out in this regard suggest that the fusion of elements such as neon and oxygen as a last resort could generate gravitational waves that would throw off some of the external regions of the star. In addition, just before the collapse, the same thing can happen with a very short stage in which silicon is used as fuel.

In short, this has been a unique milestone, which can also give us very interesting information about the end of some stars. In the words of one of the authors of the study, Raffaella Margutti , it has been like witnessing the explosion of “a time bomb”. And the best thing is that this pump still has a lot to teach.

Share
Facebook
Twitter
Pinterest
WhatsApp
Previous articleThe panic before a new Filomena is based on the pseudoscientific prediction of a 15-year-old boy
Next article‘Call of Duty: Modern Warfare 2’ could arrive sooner than you thought
RELATED ARTICLES
Science