They discover an exoplanet shaped like a rugby ball 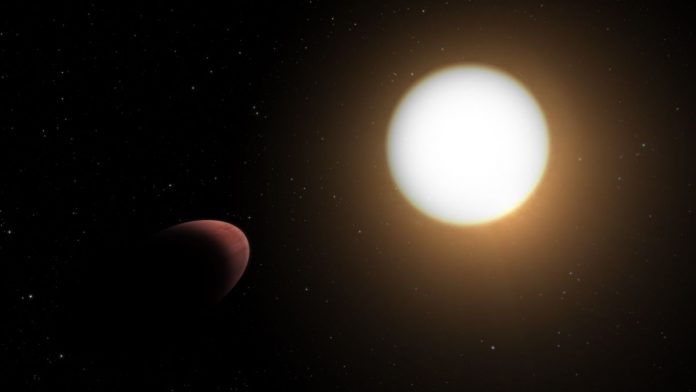 Its name is WASP-103b, it is larger than Jupiter, and has a strange oval shape similar to rugby balls

It is funny that WASP-103b, the exoplanet shaped like a rugby ball that they have just discovered, is in the constellation of Hercules, for the Greeks, personification of force; in Rome, Hercules was also the protector of honesty.

To make matters worse, WASP-103b is a giant, almost twice the size of Jupiter, with 1.5 times its mass. Thus, those big men and women who say that the human body is made for rugby (with the exception of the ears), would already have an exoplaleta to play if there were rugby at Olympus.

The star it orbits is called WASP-103, and it is about 200 degrees hotter and 1.7 times larger than the Sun.

Gods aside, WASP-103b is extraordinary. It is twice the size of Jupiter and it only takes a day to orbit its star. The star it orbits is called WASP-103, and it is about 200 degrees hotter and 1.7 times larger than the Sun. It is located about 1532.9 light years (470.0 pc) from the System Solar, and its extraordinary rugby ball shape is due to the strong tidal forces between the planet and its star.

The exoplanet mission Cheops of the ESA has been able to verify how little it takes to circle its sun. It takes just one day to orbit its star. Cheopos has also discovered its extraordinary shape, more like a rugby ball than a sphere. This is the first time that this ‘deformation’ has been detected on an exoplanet.

The tide that deforms planets

On Earth we know well what tides are and we tend to think only of the Moon as responsible. However, the Sun also has a small but significant effect on the tides, although it is too far away to cause large deformations in the rock mass of our planet.

The same cannot be said for WASP-103b, a planet almost twice the size of Jupiter with 1.5 times its mass, which makes a complete orbit around its star in less than a day. The pull of its star is what has given it that rugby ball shape.

“The resistance of a material to deformation depends on its composition”, explains Susana Barros, from the Instituto de Astrofísica e Ciências do Espaço and the University of Oporto , Portugal, and lead author of the research . “For example, here on Earth we have tides due to the Moon and the Sun, but we can only see the tides in the oceans. The rocky part doesn’t move that much. By measuring how much the planet is deformed, we can know which part of it is rocky, gaseous or water ”.

“It is incredible that Cheops was able to reveal this small deformation “, says Jacques Laskar from the Paris Observatory, Université Paris Sciences et Lettres, and co-author of the research. “This is the first time such an analysis has been done, and we can hope that observing over an interval will allow a better understanding of the internal structure of the planet.”

His movement is a mystery

There is another mystery around WASP-103b. Tidal interactions between a star and a very close Jupiter-sized planet would logically make the planet’s orbital period shorter and shorter, gradually bringing it closer to the star before it was finally engulfed by the parent star. However, measurements from WASP-103b seem to indicate that the orbital period could be increasing and that the planet is slowly moving away from the star. This would indicate that there is something other than tidal forces affecting this planet.

Could there be another star nearby that has not yet been discovered?

There will be more news about the space rugby ball. Observations with Cheops and the James Webb (Webb) Space Telescope will reveal more details. Webb’s extremely high precision will improve measurements of the tidal deformation of exoplanets, allowing a better comparison between these so-called “hot Jupiters” and the giant planets of the Solar System.

A rugby ball in our confines

It is not the first time that a celestial object in the shape of a rugby ball has been detected, although not an exoplanet.

Haumea (pronounced how-may-a) the oval rock that you see spinning below, is a dwarf planet. It was discovered in 2004 and is part of the Kuiper belt . It orbits the Sun from a distance of about 43 astronomical units (AU).

Haumea is too far and too small to be seen clearly with a telescope on Earth and spacecraft have not yet visited it. However, astronomers believe that its shape is similar to a rugby ball. They solved this by looking at the way it reflects light. Haumea has this unusual shape because it is one of the fastest spinning objects in our Solar System. It spins once every 4 hours!

Here it is, in full swing.