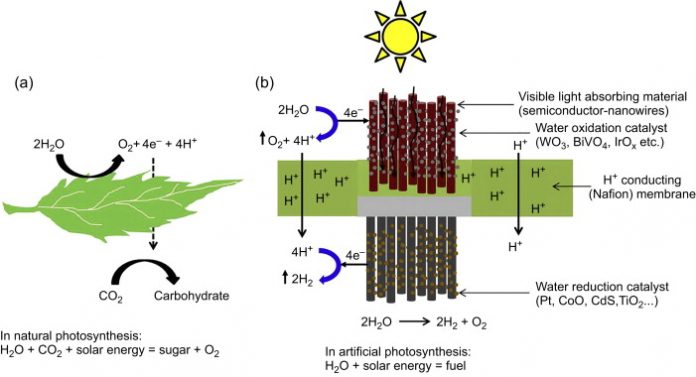 José Ramón Galán-Mascarós is a chemist, ICREA researcher, and expert in artificial photosynthesis. We interviewed him to talk about a newborn, A-LEAF (one sheet)

About the size of a soda can, A-LEAF is at the moment a sprout, a prototype, but much more efficient than sugar cane or redwoods (to give two examples) in sophisticated The task of obtaining energy from sunlight. A-LEAF is proof that artificial photosynthesis is already a reality.

Will the future world be full of fake trees?

It’s not going to look like a tree. But the future will be full of parks capable of capturing sunlight and transforming it into fuel.

Artificial parks. Natural photosynthesis is not enough. The average use of sunlight by plants is less than 2%. All a plant does is grow. Not long ago, it doesn’t move. Carnivorous plants, if you play open and close and do it over and over again, they end up dying, because they don’t have enough energy. If natural photosynthesis were enough, with biomass we would have already solved the problem.

So we have to be more efficient than plants

What is artificial photosynthesis?

Basically, what you do with artificial photosynthesis is, with sunlight, transform a molecule with little energy capacity into another molecule from which energy can be extracted.

You can take water, you divide it into hydrogen and oxygen, and you store hydrogen. Later, when you need the energy, you recombine the hydrogen with the atmospheric oxygen and make water again.

What you get is always hydrogen?

You can get a chemical fuel, which can be hydrogen, or it can be different.

With A-LEAF we use water and СО 2 and transform it into formic acid, a liquid fuel that, as an advantage over hydrogen, which is a gas, can be stored more easily.

But there are more possibilities. You could think of taking nitrogen and getting ammonia.

Just as gasoline is now a mixture of hydrocarbons, in this process of artificial photosynthesis the resulting product can be chosen, or a mixture of several, depending on the model.

Is photosynthesis better than other alternative energies?

Photosynthesis has the advantage over other renewables that in the end you get fuel, easier to store than electrical energy. But without polluting, without releasing extra CO 2 .

At A-LEAF we use CO 2 for the process, which can be extracted from the atmosphere (although the technologies to achieve this are not yet highly developed and are expensive) or directly from the stacks that produce it. .

Thus, CO 2 is “recycled”: first it is fixed in solar fuel, and then it is regenerated to release energy, in a carbon-neutral cycle. It is not like the CO 2 that the dinosaurs fixed and that is being released into the atmosphere millions of years later.

Is it a technology that helps meet the targets for decarbonization in 2050 ?

I honestly believe that without artificial photosynthesis it is impossible to meet these goals.

If artificial photosynthesis is already achieved, why is it not applied

Could you install an A-LEAF at home?

It will help, like putting solar panels on the roofs. And it will also be a good solution to bring cheap and clean energy to developing countries. With artificial photosynthesis you will not need oil tankers to carry the energy, and this is especially interesting for remote places that are difficult to access. It will not be necessary to build large infrastructures, but small towns or mountain sites or islands could use the energy of the sun to obtain fuel. They will only need water and sun.

Will your destination then be domestic energy?

Not alone. The most important thing is that it also provides a solution to the industry. Artificial photosynthesis may be the push for hydrogen cars to take off, and it is a unique opportunity for the chemical industry. We can make hydrogen, but also methanol, and many other basic components, helping to decarbonize a multitude of industrial processes. It is an opportunity that should not be missed.

Why, in your opinion, artificial photosynthesis deserves to be among the first bets for the energy of the future?

In general, the transformation of renewable energy into fuel will be necessary to balance the electricity grid.

The photovoltaic and wind farms are already economically viable, the problem is that they do not always work, because there is not always sun or wind. If you associate a storage system such as chemical fuel with these parks, carrying out artificial photosynthesis, for example, you will have balanced the network. In this way, you store the energy, and when the grid peaks, you release it from that stored fuel. Also, you can sell the fuel. And the whole process without increasing the atmospheric CO 2 . It is a round idea.

In this video, Futurism explains how artificial photosynthesis works