A ‘robot seabass’ to keep invasive species at bay: fear helps control pests and these researchers show it 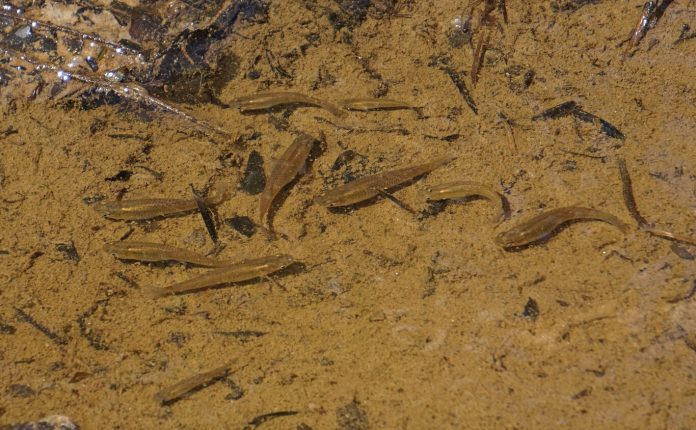 Drawing on popular wisdom and the infallible maxim that few things are more powerful in nature than the survival instinct, a group of researchers has devised a promising system to keep the population of mosquito fish ( Gambusia spp ) , a native species, at bay. from the western and southeastern US that throughout the last century was released at will around the world as a desperate solution to control malaria, but which, over time, has ended up revealing a terrible scourge for fish and native amphibians . What is the proposal? Design and manufacture a robot that emulates a seabass, its natural predator.

In theory, or at least in the theory of the 20th century authorities, Gambusia spp should become our best ally in fighting malaria . The proposal sounded like a thousand wonders on paper: hatchlings were moved to different areas affected by the disease and released into rivers, lakes and ponds in the hope that they would eat the larvae of the mosquitoes that transmit malaria. To John “Hannibal” Smith’s regret, plans, however, don’t always go well. The Gambusia spp started primed with native species and showed a fondness for eggs and even the tails of fish and amphibians. Their impact was such that, as Science News recalls , they ended up sneaking into the catalog of large invasive species prepared by the International Union for Conservation of Nature.

The effect of a good scare

The usual thing in cases like this is that the authorities opt for drastic measures and pull traps and poisons to eliminate the largest number of specimens. The problem, often, is that these measures are not very effective and can harm the native species that they want to protect. Faced with this crossroads, Giovanni Polverino, from the University of Western Australia in Perth, and the rest of his colleagues opted for another solution, much more imaginative: they designed and manufactured a robot that emulates a specimen of Micropterus salmonides , aka largemouth bass (or sea bass). ) black, natural nemesis of mosquito fish. Their goal, notes Natural Science, was to opt for “more creative ways to prevent unwanted species behavior.” The problem, in the end, was not the Gambusia population in the ecosystems, but how it behaved due to the lack of predators.

With the “robofish” ready, the researchers prepared twelve tanks in which they released half a dozen mosquito fish and as many native Australian tadpoles, one of the species with which they are usually baited in the wild. After a week the samples were divided into two groups, which were experimented with in special tanks: in the first, the “robot fish” was released for a certain time, which the experts programmed to recognize and pounce on the mosquito fish that they tried to get close to the tadpoles; the second, which served as a contrast, was kept in the same conditions, free from the mechanical predator.

By reviewing the results, the scientists found the effect of fear. The mosquito fish that interacted with the robofish ended up modifying their behavior : they stopped exploring the tank, tended to group together, and showed a more passive and alert attitude. The most curious thing about the experiment is that the effect was perceived even when the mosquito fish were free from the stalking robot. Quite the opposite occurred with the amphibian hatchlings, which began to behave more freely and undertook more extensive explorations of their ponds.

The effect of mechanical seabass even left a physiological imprint on mosquito fish. Due to the accumulated stress, they lost size and some gained speed to escape from the bass . Even the sperm count of the males was affected: it fell more or less by half. The conclusions are collected in an article in iScience with a title that could hardly be clearer: “Ecology of fear in highly invasive fish revealed by robots.”

With the study’s conclusions already on the table, are the researchers considering releasing mechanical bass left and right in clean water ecosystems, such as lakes and rivers? ” Our plan is not to release hundreds of thousands of these robots into the wild and expect them to solve the problem,” Polverino clarifies to Science News . The key, he details, is in what the study shows: the effect of fear, something that can also be taken advantage of, recalls the expert, resorting to much more conventional measures such as reproducing the smell of predators.