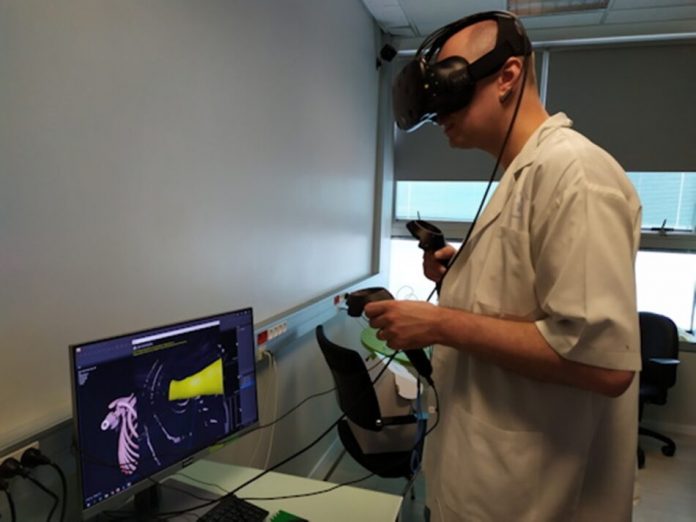 A team of anesthetists from the Tel Aviv Sourasky Medical Center, Israel, is using 3D technology to test the best anesthesia in high-risk patients before an operation. They have performed this in operations on 20 patients, including a 35-week fetus who required caesarean section and a seven-year-old boy. Reconstruction in 3D of a trachea, for example, and using virtual reality techniques, allows anesthesiologists to know exactly what they are dealing with, and to be able to rehearse before the operation to establish a personalized plan.

THE SEVEN-YEAR-OLD BOY WHO COULD KEEP BREATHING

One of the most surprising cases was that of a seven-year-old boy with Ewing’s sarcoma (a cancer of the bones and soft tissues) who required an operation to remove part of his right lung. Anesthesiologists were concerned that standard tubes and devices used for pulmonary operations in older patients might not be appropriate.

The CT scans were used to create a virtual reality program of their airways and lungs, and an exact 3D printed plastic model so they could formulate a personalized airway plan and become familiar with the patient’s airway anatomy. . The final plan was different from the plan developed using standard imaging techniques. This reduced the number of lung isolation attempts that would otherwise have been made on the patient, and she recovered well.

3D printed model of the airways of a seven and a half year old patient. Source: Ruth Shaylor

Shaylor said the technique they have been testing for two years shows that a specific plan in place reduces trial and error. Furthermore, the anesthesiologists involved in these cases reported that they had less stress. They also found that sharing these models with patients gave them a deeper understanding of their upcoming surgery and helped improve communication. The team hopes that 3D printing will be implemented in these cases, as it is not yet used for preoperative planning of the patient under anesthesia.

Virtual reality and 3D printing can improve patient care and reduce anesthesiologist stress by allowing them to practice the procedure before surgery, new research presented at Euroanaesthesia, the annual meeting of the European Society for Anesthesiology and Intensive Care (ESAIC).

Most of the cases in the study involved children who needed lung surgery, although this technology was also used to design personalized plans for patients who need to remove large masses of tissue in the chest that compress the heart and lungs, called mediastinal masses. . Mediastinal masses are made up of tumors, fluid-filled sacs (cysts), and other abnormalities in the organs of the mediastinum, the part of the chest that contains the heart, the thymus gland, some lymph nodes, and part of the esophagus, the aorta, the thyroid glands, and parathyroid glands.

The lead author of the paper, Ruth Shaylor , explained that using image scans, the team was able to print high-precision models of the patient’s airways to plan their procedures. This is important in children because they are smaller, and so is the margin of error for doctors. Being able to view, hold, and rotate an accurate replica of a patient’s airways enables them to be viewed with clarity and precision that a flatbed scanner cannot provide.

A 3D PRINTED MODEL IN 30 MINUTES

In 2019, the anesthesia department at Tel Aviv Medical Center began using 3D printing and virtual reality modeling to routinely screen patients before surgery. For example, children requiring ventilation of one lung, surgery could be done on the other lung. Today you can scan a 3D model of the patient’s operating area in 30 minutes, and have a 3D printed copy in three or four hours.

To examine the benefits of these technologies for anesthetic management, Shaylor and his team reviewed the 20 patients who were to participate in 3D modeling between July 2019 and July 2021. In general, 3D printing was used for cases of airways. respiratory systems in 15 patients and with virtual reality for large cases of mediastinal masses in three patients.

The results showed that when 3D printing was used, the airway plan worked for 13 out of 15, or 87% of the patients. There were two cases where the model plan was more traditional, as the equipment used was larger than the suggested model, and one case where it could not be done due to poor image scans.

After reviewing the virtual reality images , none of the patients with mediastinal masses had to undergo invasive procedures before being anesthetized. Furthermore, there were no reports of complications with anesthesia in patients who tried 3D modeling.

The use of three-dimensional printing and virtual reality to develop a personalized airway plan in a 7.5-year-old childFaceb