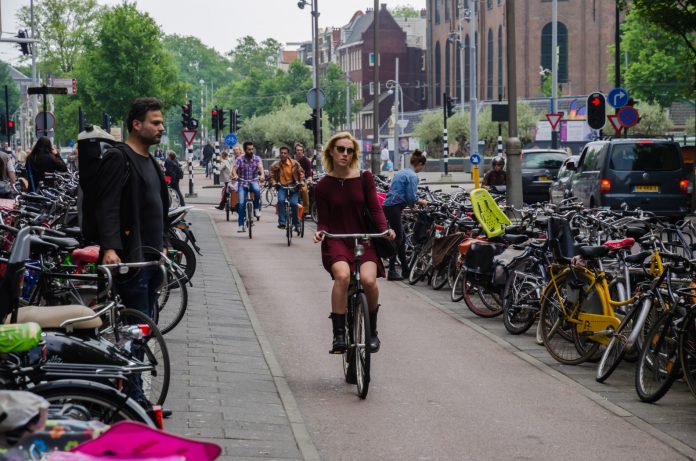 The Netherlands is a paradise for cyclists. It is estimated that there are more than 18 million bicycles in the country, when the current population is 17 million inhabitants. In fact, bicycle culture is so important in the Netherlands that it even has its own embassy, ​​the Dutch Cycling Embassy .

The streets of the country are not only prepared to enjoy a bike ride, but have been designed around this experience. The bike lanes are wide, well paved, have their own signs and traffic lights, and even offer enough space both to ride parallel and to overtake safely.

In some cities, moreover, these lanes are completely separated from motorized traffic and there are even signs that give total preference to bicycles, relegating motor vehicles to simple guests. Something similar happens at roundabouts: bikes have preference .

According to these data , only in Amsterdam there are around 800,000 bicycles and it is estimated that 63% of its inhabitants use this means of transport on a daily basis. By cons, the number of cars in the city is 263,000. In fact, traffic in the city is distributed in this way:

The Dutch use the bicycle to go to work, to do the shopping, to go to study, to take the children to school, to take a nice walk with their partner, to play sports… Any excuse is valid and only in Amsterdam there is 500Km of bike lanes with plenty of routes available to anyone. And no, there are no honks or strange stories from those who go by car: everyone has assumed that cyclists dominate the city.

With so much hustle and bustle cycling, it makes sense that Dutch cities have large parking lots for bicycles . An example of this can be found at the train station in Delft, a city halfway between Rotterdam and The Hague, but there is more:

A country that has almost as many bicycles as citizens? It could only be Holland. Posted by

How did the Netherlands get here?

Before the Second World War took place, the inhabitants of the Netherlands used the bicycle as their main means of transport. It was a respectable way of getting around for both men and women, and bikes far outnumbered cars.

The problem came after the war. During the 1950s and 1960s, car sales skyrocketed and the use of bicycles decreased alarmingly: each year it fell by 6% and entire neighborhoods were demolished to make room for motorized traffic. With cars, of course, the number of accidents began to rise.

In 1971 there were 3,300 deaths from traffic accidents, including more than 400 children. An unsustainable situation that led to social protest movements and that was the origin of Stop de Kindermoord , an activist group that wanted to put an end to what they called the murder of children and that was of vital importance.

Stop de Kindermoord grew quickly and got down to business: holding demonstrations, occupying accident black spots, and organizing special days closing streets so children could play safely. Over time Stop de Kindermoord took on government grants, opened its own headquarters in what had previously been a shop, and began brainstorming ideas to improve development plans and increase security.

The 1973 oil crisis was added to the appearance of groups such as Stop de Kindermoord, which was used by the government to send a clear message: a new lifestyle had to be adopted and energy not wasted .

And so, already in the 1980s and after politicians had had time to verify the advantages of using bicycles, cities began to introduce a series of changes to make them friendlier to this means of transport.

These changes, which started with simple but useful things like making bike lanes better marked, eventually grew and led to cities like Delft building entire networks of cycle routes.

In 2016, thanks to all these movements, the Netherlands is a cyclist’s paradise and Amsterdam is the bike capital of the world.